With no clear definition, how can you know exactly how Australian free range meat is farmed? 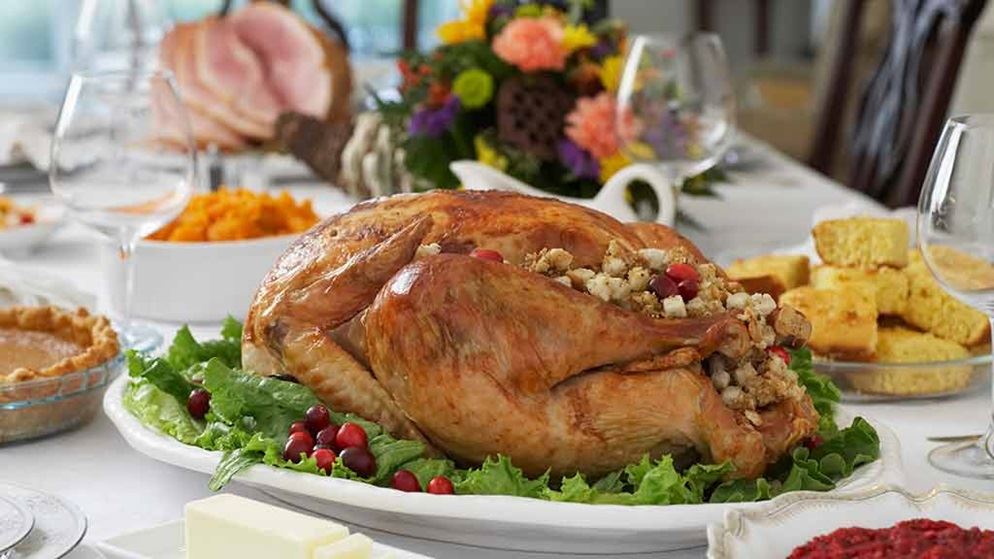 Paddock to plate …what paddock?

Last time you had pork on your fork, how much thought did you give to its journey from paddock to plate? Did the pig even step foot in a paddock?

It's estimated that 97% of the 4.8 million pigs produced annually in Australia are raised indoors with no outdoor access; this is referred to as intensive, conventional or factory farming. Only the other three per cent of pigs are raised free range or organic.

In this report you'll find:

What are the regulations around free range pork?

Some consumers are prepared to pay extra for free range pork products because of animal welfare concerns. But with no legally binding definition of free range in Australia, producers and retailers can make their own decisions about free range labelling. The animals can be farmed under a wide variety of conditions that may not gel with consumer perceptions of free range.

While the states police animal welfare issues, the policing of free range labelling falls to the Australian Competition and Consumer Commission (ACCC), which can investigate if complaints are made about misleading free range labels.

The closest we have to an official definition of free range comes from the federal government's Model Code of Practice for the Welfare of Animals: Pork. This sets out the minimum farming standards with which producers are legally obliged to comply.

The Model Code describes the "outdoor" farming method as "free range in paddocks with shelter such as arks or huts". It doesn't specify any extra welfare provisions as part of free range systems. This means animals can be raised according to minimum welfare standards of the code, but as long as they have access to an outside area they can be called free range.

One welfare concern about pigs that may drive some consumers to consider paying a premium for free range is stocking densities – how many animals are held together in a space of a certain size and how much room they have to move around. 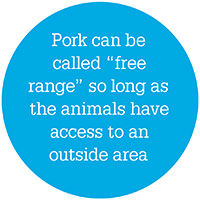 For outdoor pigs, the maximum stocking limits for sows and boars (used mainly for breeding) are "recommended" in the code, but there are no guidelines around the maximum number of grower pigs (used for meat) that can be kept in paddocks. So consumers have no way to telling how much space "free range" pigs really have.

Other concerns raised about the treatment of pigs include the use of sow stalls and farrowing crates (see Jargon Buster), teeth clipping and tail docking, as well as the use of drugs such as lean muscle-building ractopamine. All these practices are allowed under the Model Code.

The loose definition of free range is a source of frustration to some smaller farmers, who claim consumers are being misled by big Australian pork producers whose methods don't fit with how consumers perceive free range pork, ham and bacon.

"You won't find genuine free range in the sense that consumers understand it in supermarkets," says Ben Cinch, owner of The Free Range Butcher. "The big brands are looking for maximum marketing appeal at the supermarket shelf, for minimum system changes on the farm."

One way for shoppers to understand how Australian free range pork is farmed is to look for products that carry certification logos.

Certification schemes indicate the meat has been farmed under a certain set of standards, and that the farms are regularly audited to check compliance. However, we found information provided on some of these certifiers' websites is very general, while other standards may be incomprehensible to the typical consumer.

CHOICE has compiled a table (below) that compares how free range certification schemes sit on pig welfare issues. 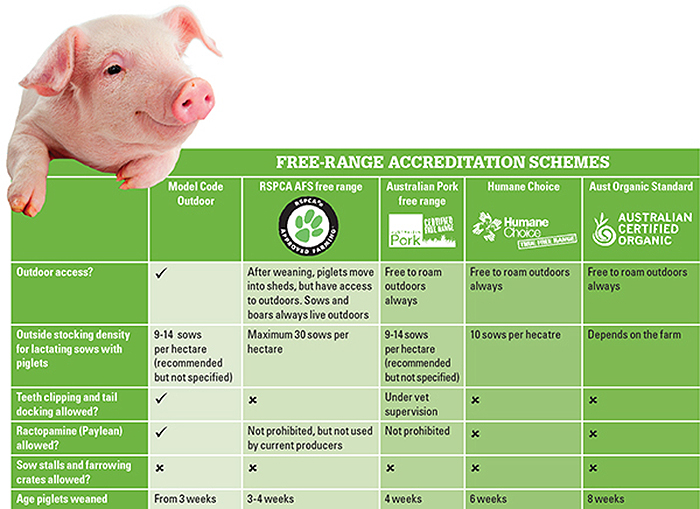 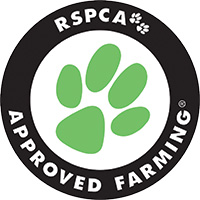 For a company to be allowed by the RSPCA to use the term "free range" on packaging, it must meet the society's outdoor welfare standards.

"The RSPCA started the scheme because it was unhappy with the lack of legislation around welfare and found certain farming practices unacceptable," says the RSPCA's Melina Tensen.

The aim of the scheme, she says, is to improve welfare for as many animals as possible. Coles and Primo both have RSPCA accreditation for their fresh pork products.

But some have accused the RSPCA's outdoor scheme of misleading consumers, citing the fact that piglets raised primarily in a shed with outdoor access are closer to "bred free" (see Jargon Buster) than free range, where pigs are often outdoors all the time. In response, RSPCA says its scheme is focused on improved welfare, whether it be in indoor, outdoor or combination systems.

So just because pork is tagged with an RSPCA logo doesn't guarantee it's free range. You also have to look for "free range" on its packaging to be sure it has come from pigs raised to RSPCA standards on farms where they have access to the outdoors and where compliance is assessed every six months.

In January 2013, Coles announced its home-brand fresh pork, ham and bacon would be sow stall free. But critics have noted the ban doesn't extend to farrowing crates, and in all other respects the pork is still conventionally farmed.

Coles Finest Free Range Pork certified by the RSPCA is a more substantial welfare measure guaranteeing the pigs have outdoor access. But unlike some other certification programs, the animals are not outdoors all the time.

Often confused with free range, these are marketing terms referring to pigs that are born outside, but after weaning at around four weeks are raised indoors with no outside access.

Designed to prevent aggression between sows, these metal enclosures of a minimum size of 0.6m x 2.2m are used to confine sows when pregnant. The sow can lie down but can't turn around. Sows can be kept in stalls for all or part of their 16-week pregnancy, but by 2017 this will be reduced to a maximum of six weeks. The pork industry is talking about phasing out sow stalls completely by 2017.

These cages are designed to force the sow to lie down slowly so the piglets aren't crushed. At a minimum size of 0.5 x 2m, the sow can stand but is unable to turn around. Sows are confined from about a week before giving birth until the piglets are weaned at about four weeks.

A substance used to build lean muscle that is banned in the EU, China and Russia. Coles has banned its fresh pork suppliers from using ractopamine and extended the ban to all home-brand deli products by 2014.

The peak industry body Australian Pork says there's no evidence ractopamine is dangerous to people, and that there is a rigorous system to ensure all pigs that enter the food chain are safe for human consumption.

It's illegal to import fresh pork meat and pork with a bone into Australia due to the risk of disease, so all fresh pork and ham on the bone is produced locally.

About 60-70% of all bacon and ham consumed in Australia is imported frozen (mainly from the Netherlands and Denmark) and processed into bacon, soccer ball, shaved or leg ham, or used in processed foods. As a result you'll often see "Made in Australia from imported and local ingredients" on the packaging.

To buy completely Australian-grown meat, look for "Product of Australia" or "100% Australian Pork".

Like all free range meat, there is no legally enforceable definition of free range for turkey in Australia. As long as the birds have access to the outdoors they can be called free range.

It's for these reasons that people may choose to buy free range, but it can be hard for consumers to know what sort of conditions the turkey are kept in.

There are two major free range accreditors for turkey (and chicken):

Both accreditation systems require the birds to have access to the outdoors. Both are based on the Model Code minimum welfare standards, and the one main deviation we could see from the code is that both have lower indoors stocking limits of 28-35kg (about five to seven birds) per square metre, compared with up to 46kg/m2 (about nine birds) recommended under the code.

The Model Code allows de-snooding (cutting off the fold of skin that falls over the beak), toe trimming and beak trimming. However:

Just like for free range meat chickens, the RSPCA turkey standard goes further than FREPA in its emphasis on welfare measures, with a requirement of "enrichment" for birds. These include perches, deep litter (material on the floor of the shed) to scratch around in and pecking objects to allow the birds expression of their natural behaviours.

Other RSPCA welfare measures that exceed the Model Code include a mandatory minimum eight hours of complete darkness and at least eight hours' light to stimulate activity in the birds.

All FREPA products are free range, but if you want to buy free range turkey that is accredited by the RSPCA, look for the word "free range" on the package. If there is a RSPCA logo but not the words "free range", the birds are raised indoors to RSPCA standards but have no access to the outdoors.