The design of smartphones means we keep upgrading instead of repairing them. 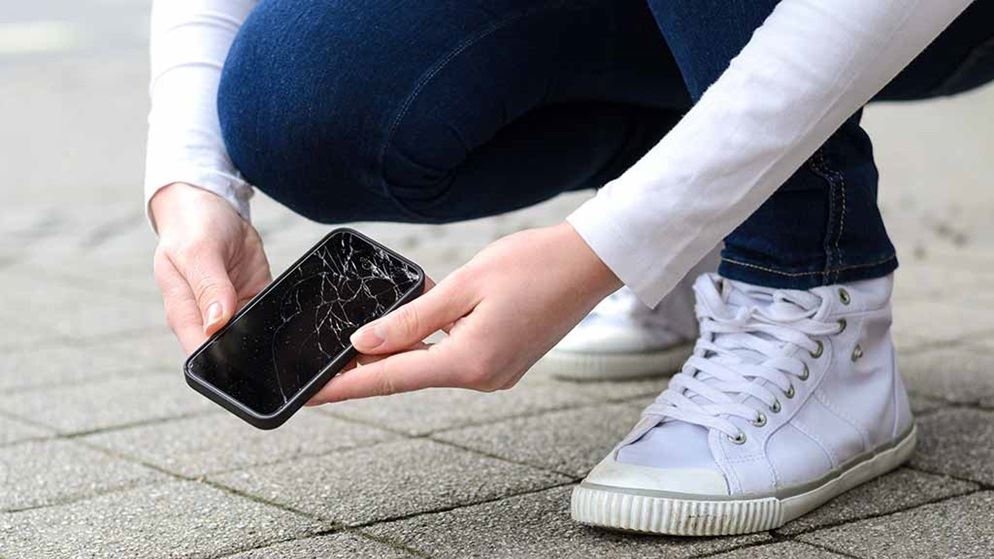 When your smartphone's screen cracks, the camera breaks or the battery fails, do you look into getting the phone repaired? Or do you immediately opt to replace it?

If fixing a phone seems all too hard, or just not worth it, you unfortunately might be right when it comes to certain models or repairs.

We take a look at some of the best and worst phones for getting repaired. And if you want a phone that will serve you for a number of years, read on to discover the features that you should look for, and which to avoid.

We compare 71 mobile phones from brands such as Apple, Samsung, HTC, Google, Motorola, LG and more in our smartphone reviews.

What makes a phone hard to repair?

"A number of products are being built in ways that make it difficult for users, even repair professionals, to fix – thus shortening the lifespan of these devices and quickening the pace they transform from this year's latest thing into unwanted e-waste," says Greenpeace campaigner Elizabeth Jardim.

Jim Puckett, who leads the US-based Basel Action Network, an organisation that campaigns to ensure the responsible recycling of electronics says, "In the old days, when something was broken we would say – 'I gotta get that fixed!'"

"Now, we are insidiously being taught to say 'I gotta get a new phone'."

There are a few reasons why phones can be difficult to repair:

Jardim co-authored How Repairable is Your Mobile Device?, a report released by Greenpeace and independent tech repair advice site iFixit in June 2017, looking at the repairability of 21 best-selling smartphones with models from 2015 to 2017, along with laptops and other devices.

"Unfortunately, nearly 70% of all devices we assessed had batteries that were impossible or difficult to replace, due to design decisions and the use of strong adhesives to affix the battery to the casing. Samsung's Galaxy S8 smartphone batteries are completely adhered to the device panels."

Kyle Wiens, CEO of iFixit tells CHOICE, "Batteries have a finite life – 400 charge cycles in the case of the phone."

This means they're going to need replacing at some point, but manufacturers refuse to provide spare parts like batteries to repair shops or recyclers.

Spare parts – you'll be lucky to find them

"Every device has a unique set of parts," says Weins. "[But] in the phone world, no manufacturers are selling parts."

Instead of making spare parts available to the public or third parties, most manufacturers instead offer to repair a broken phone – at a cost. It's a good idea to look into what repair services the manufacturer offers and how much they cost before buying the phone.

You can look online and check the iFixit device repair site to get an idea about the availability of aftermarket (made a by a third party) spare parts.

Another design feature that makes repair (and recycling) difficult is the use of parts that need non-standard or proprietary tools, which limits access to the device.

Thanks to their design, some smartphones are more susceptible to problems like water damage or cracked displays.

We test and score the durability of mobile phones by simulating falls from a table or out of a shirt pocket up to 25 times. We also store the phones in hot, damp conditions, and carry out a rain test. In our latest smartphone reviews, one of the highest rating phones for performance was also the least durable.

When choosing a phone, iFixit recommends choosing one with a metal chassis instead of a 'glass sandwich', which will make it easier and cheaper to repair. When they tried to take a broken glass back panel off the new iPhone 8 Plus to see how easily it could be repaired, they reported, "replacing a broken back is going to be a very, very difficult (and expensive) job".

How repairable is your phone?

You can check to see if your smartphone or one that you plan on buying is included in the How Repairable is Your Mobile Device? report.

Also check out the smartphone repairability scores on the iFixit website, which includes smartphone models from 2017 back to 2007.

Here's how they rate a few of the newer models.

iFixit gives the Samsung Galaxy S8 and S8+ a low repairability rating of 4 because of the easily broken front and back glass, as well as the strong adhesives used on the screens making it hard to access for repair. The site also states, "The battery is very strongly adhered to the back of the display and buried beneath the midframe."

On a more positive note, iFixit says that many of the S8's components are modular and can be replaced independently. 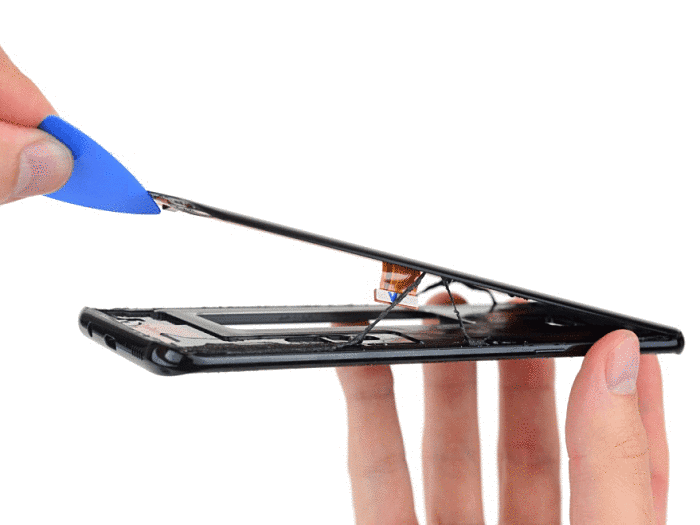 ABOVE: Samsung's Galaxy S8 is fused together with adhesives making it difficult to disassemble. Image courtesy of iFixit.

Apple's latest offering gets a mid-range rating of 6 from iFixit for repairability, thanks to its easy-access battery and wireless charging that reduces strain on the single port.

However, the rear glass is extremely difficult to replace if broken. 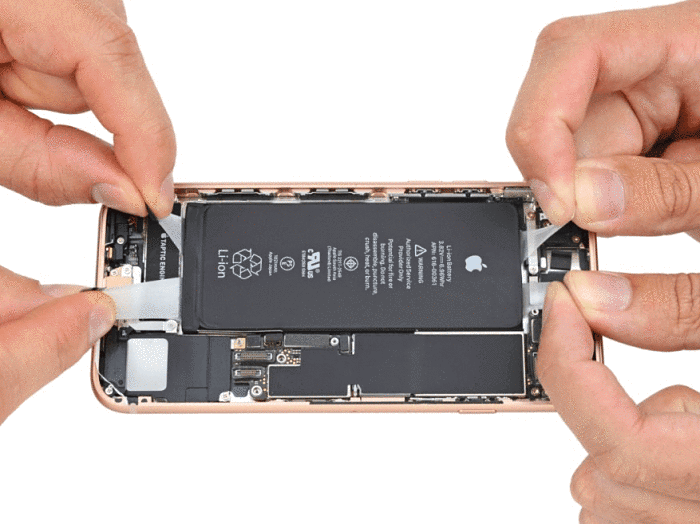 ABOVE: The iPhone 8 has adhesive tabs keeping the battery secured. Image courtesy of iFixit.

iFixit marks the G6 rating down to 5 on repairability (compared to the previously good rating of 8 for the G5) on account of its crackable front and back glass panels, and the strong adhesives used on these. It also notes that the phone's components are adhered to the back of a fused display assembly.

iFixit also notes that many components in the G6 are modular and can be replaced independently. 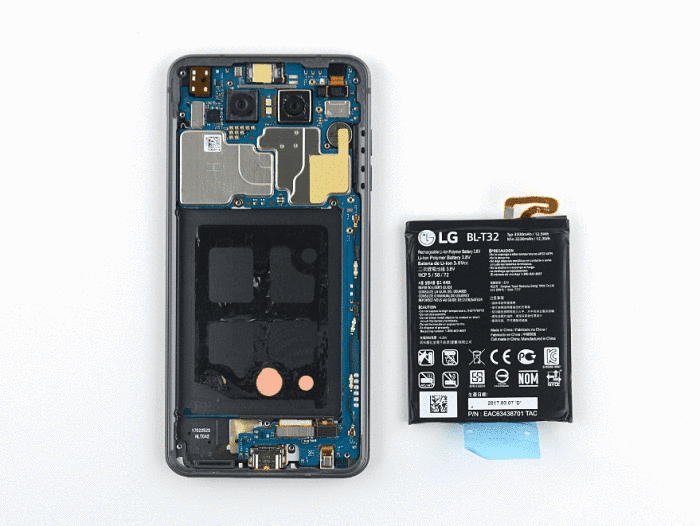 ABOVE: LG's G6 uses adhesives to fuse components together. Image courtesy of iFixit.

Keep your tech waste out of the environment – see how to recycle your computer.

Repairing the phone yourself

There are online resources that will show you how to repair your own phone. iFixit, for example, specialises in 'product teardowns' (guides to disassembling a device) and also provides specialist tools and spare parts to individuals and service providers.

If you're thinking about repairing your phone yourself, consider whether it's possible you'll damage the phone and possibly affect your warranty rights. Phone companies won't say outright that third-party repairs will void warranties, but if the innards of a phone are moved around while accessing a battery or repairing a screen, it's highly likely the phone company won't like it.

Smartphones and the environment

According to Mobile Muster, most Australians replace their mobile handset every two to three years. To put this in context, there were approximately 17.2 million mobile phone handsets in use in Australia in 2017. That's a lot of phones being replaced.

From an environmental perspective, doubling the amount of time we keep our phones halves the amount of e-waste created. E-waste is the fastest growing waste stream in Australia.

Making devices that are repairable and last longer reduces the need for the raw mined minerals, hazardous chemicals and the large amounts of energy used in a device's manufacture.

And if a device is easy to take apart for repair, it's also easier to disassemble the components for re-use and recycling. According to mobile phone recycling program Mobile Muster, over 96% of the materials used in mobiles and accessories can be recovered.

The problems with e-waste

There are an estimated 23 million unwanted mobiles in homes around Australia, most of which will contain both toxic and valuable minerals, including gold and silver (see How to recycle your old mobile phone, below).

When e-waste is sent to landfill, poisonous substances can leach into the environment. These substances can seep into groundwater, contaminate the soil and enter the food chain. There is a risk that humans may develop health problems by coming into contact with the toxins. These include respiratory ailments, reproductive, developmental and nervous system problems.

According to the UN, up to 90% of the world's e-waste is illegally traded or dumped each year from high income countries like Australia and the USA to countries in Africa and Asia.

An ABC report into e-waste shows children at a notorious dump site in Ghana, breaking Australian e-waste apart and burning the circuit boards in open fires to melt and collect precious metals. According to the report the children suffer from open skin sores, headaches and heart problems.

How to recycle your old mobile phone

If it's still in good working order you could try selling or giving away your mobile phone online, on sites such as eBay, Gumtree and Facebook Marketplace.

But if it's out for the count, Mobile Muster is a government-accredited mobile phone recycling program. It promises to "keep your phone out of landfill" using environmentally-friendly methods.

Your phones can be dropped into Mobile Muster collection boxes at Telstra, Virgin Mobile, Samsung, Optus and Vodafone stores.

What do the manufacturers say?

We asked LG, Samsung and Apple a number of questions about their approach to the repairabliity of their products, including: