The ethics of eating kangaroo meat

Roo has found its way onto supermarket shelves and into high-class restaurants. Should we be eating it? 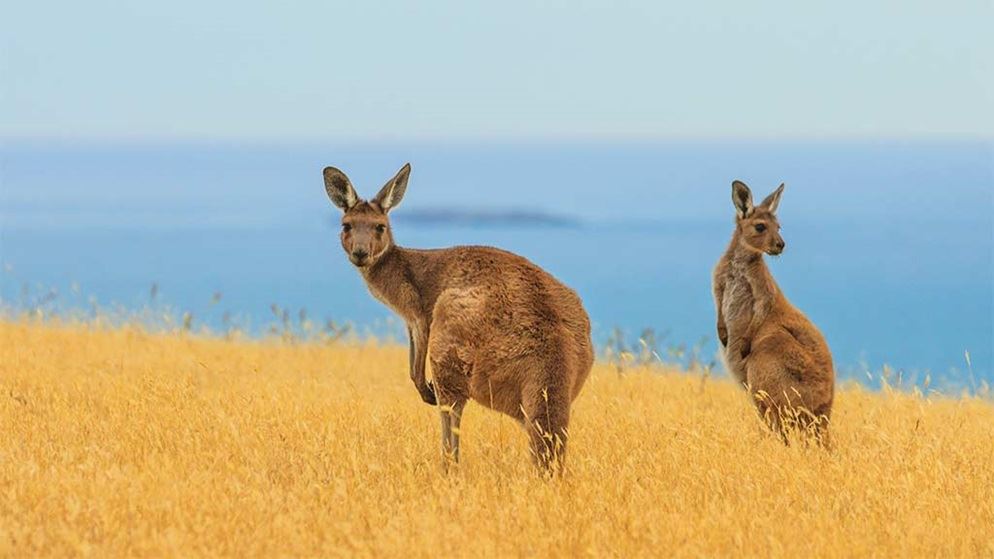 Roo on the menu

It wasn't long ago that kangaroo meat was considered only good enough for our four-legged friends, but it seems those days are over. Not only has roo made the leap from the pet food aisle into the fresh meat cabinet at the local supermarket, it can also be found on the menu at many fine-dining restaurants.

And it's not just Australians that are becoming partial to it – kangaroo meat is now regularly exported to over 40 countries worldwide, with the industry saying it's worth an estimated $150 million annually.

But it seems not everyone has been won over. Surveys on consumer attitudes to kangaroo meat have found just over half of Australians have ever tried it, and many people object to eating it due to concerns about hygiene, animal welfare, or because they think it's unhealthy.

So are people right to be wary of kangaroo meat? Or does it live up to the healthy and environmentally friendly image the industry portrays?

Many people think kangaroos are farmed for their meat, but all the kangaroo meat on supermarket shelves and served up in restaurants comes from kangaroos harvested from wild populations.

Four species are commonly harvested – red kangaroos, eastern and western grey kangaroos, and the common wallaroo. Harvesting is regulated in each state by the relevant government authority, and management plans for the harvest must also be approved by the federal government.

According to the Department of Environment, the commercial kangaroo harvest is "one of the world's best practice wild harvest operations, with management goals based firmly on principles of sustainability".

According to Professor Kerin O'Dea, an expert in nutrition at the University of South Australia, there's no reason to doubt kangaroo being a healthy red meat. "It is very lean, a good source of protein and a very good source of iron and zinc," she says.

One of the healthiest properties of kangaroo meat is its low fat content, coming in at less than 2%. "There is no visible fat on kangaroo meat, and the fat it does have is mostly polyunsaturated. Lamb and beef, on the other hand, are much higher in visible and saturated fat," O'Dea says.

But before you go loading up on kangaroo, be aware it hasn't received a completely clean bill of health. In 2013, researchers found that L-carnitine, a compound found in all red meat but which is highest in kangaroo, was associated with the build-up of arterial plaque, which may lead to cardiovascular disease, heart attacks and strokes.

As with all red meat, O'Dea says kangaroo meat should be consumed in moderation. Current Australian dietary guidelines recommend a maximum of 455 grams of lean red meat per week.

Want to reduce your carbon footprint without giving up red meat? Kangaroo could be your answer.

Cows and sheep belch out large amounts of methane, a greenhouse gas 20 times more potent than carbon dioxide. Kangaroos, on the other hand, produce very little of it. So switching to kangaroo can help ease your carbon-conscience.

Kangaroos also have less impact on the land compared to cattle and sheep, according to Dr Rosie Cooney from the University of NSW "Kangaroos have a much lower environmental impact in terms of water used," she says. "Cattle and sheep also have hard hooves, which causes land degradation and increases soil erosion."

But the environmental benefits of eating kangaroo only apply if you substitute it for the beef or lamb you already consume. Tacking it on to your existing red meat consumption is of little benefit.

If you're worried eating one half of our coat-of-arms will cause kangaroo numbers to plummet, Cooney says there's little to worry about. "There are now several decades of data showing that harvesting kangaroos has little impact on their overall numbers."

A maximum quota of 15–20% of the kangaroo population can be harvested in any year, but usually much less than that is taken. And population surveys are conducted regularly to keep an eye on kangaroo numbers.

But being sustainable doesn't mean we can all just start tucking into kangaroo – there simply aren't enough of them to go around. If every Australian had just one serve of kangaroo per week, then it's estimated we'd need more than ten times the number of kangaroos.

Given they're harvested in the wild and not in sanitised abattoirs, just how safe is kangaroo meat to eat?

In 2012, animal rights groups Animal Liberation and Voiceless caused a stir when they found salmonella and Escherichia coli (or E. coli), both of which can cause food poisoning, on kangaroo meat taken from supermarket shelves. And in 2009, Russia banned imports of kangaroo meat, reportedly due to high levels of bacteria.

But Professor Michael Archer from the University of New South Wales says finding disease-causing bacteria on any red meat is not uncommon. He says there have been peer-reviewed, scientific studies showing levels of bacteria on kangaroo meat are comparable to or lower than that found on other red meats.

And according to a spokesperson from OzFoodNet, the federal government's watchdog on foodborne disease outbreaks, there have been no confirmed reports of food poisoning resulting from the consumption of commercially harvested kangaroo meat in the 15 years OzFoodNet has been running.

When we approached the NSW Food Authority, their spokesperson also reported a clean record in that state, telling us "Kangaroo is widely regarded as a safe and healthy meat."

Several animal welfare organisations, including Voiceless, Animals Australia and Animal Liberation, have campaigned against the kangaroo harvest, saying it's a cruel process that should be stopped. And they have recently gained support from the Centre for Compassionate Conservation (CFCC) at the University of Technology, Sydney.

"From an ethical perspective, we should demand that any animal we kill for our own consumption is killed humanely, and we need to be able to guarantee it," says Dr Daniel Ramp, director of the CFCC.

So are kangaroos being harvested inhumanely?

Kangaroo harvesters must follow a code of practice that specifies all kangaroos be killed instantaneously by a single bullet to the head from a high-powered rifle. It sounds harsh, but as Dr Bidda Jones, chief scientist from RSPCA Australia told CHOICE, "a shot to the head that destroys the brain is one of the most humane methods of killing an animal".

According to Ramp, however, with very little monitoring of the harvest taking place, it's hard to know whether the code of practice is being followed or not. "The shootings are occurring at night, in the bush, by a lone shooter. Even the best shot is going to miss a kangaroo head hopping away, even at 30 or 40 metres."

Ramp says an even bigger issue is the problem of orphaned joeys. When a female kangaroo is shot, the code states the young in her pouch or any young by her side must also be killed – the reasoning being that without their mother, any young will most likely starve and die.

"Most shooters find complying with this very difficult and leave the dependent young to fend for themselves," says Ramp. "That's a lot of animals that are not dying humanely."

But John Kelly, executive officer of the Kangaroo Industry Association of Australia (KIAA), says the welfare issues surrounding kangaroo harvesting have been overstated.

With regards to joeys, Kelly says the KIAA, the industry body representing the majority of harvesters, has a policy of taking only male kangaroos to reduce the number of joeys orphaned and killed. Kelly says male kangaroos now account for more than 90% of the national harvest – up from 70% in previous years. Some of the big suppliers of kangaroo meat, including Macro Meats and Aussie Game meets, state their male-only policies on their websites.

As for concerns about the harvesters' capabilities, Kelly points to a 2014 study of kangaroo harvesting in NSW which found a 97% success rate in achieving an instantaneous death. Kelly says this shows that, far from being the cowboys they are portrayed as, kangaroo harvesters are professional marksmen with an "extraordinarily high level of competency".

There are ethical considerations for anything we consume, and kangaroo meat is no exception. But do the health and eco benefits of eating kangaroo outweigh the welfare concerns?

The answer to that question obviously comes down to personal ideals. But Kelly says if you're already eating red meat, then you need to consider the welfare issues surrounding lamb and beef.

"Kangaroo harvesting is probably the most humane way there is of producing red meat," he says. "They are harvested in their natural environment and they are not put under stress by man in any way. They're not mulesed, ear-tagged, tail-docked, or branded. They're not mustered, or deprived of food and water, and they're not trucked to slaughter."

The code of practice covering the commercial kangaroo harvest was due for review in 2013. Dr Bidda Jones from RSPCA Australia told CHOICE the RSPCA has formally requested that the federal government review the code. "This does not mean the RSPCA supports all kangaroo shooting, but we are working to make sure that the methods used reflect the most recent science," she says.

Some of the items the RSPCA would like to see incorporated into a revised code include an operating procedure outlining the most humane way to euthanase joeys, as well as a standardised competency test for shooters. Jones says the RSPCA is also concerned about how the move to a male-only harvest is impacting on kangaroo populations.

Interested in sustainability and ethical issues surrounding your food and want to know more?