Is sunscreen safe for young babies?

We ask the experts whether it's OK to use sunscreen on infants under six months. 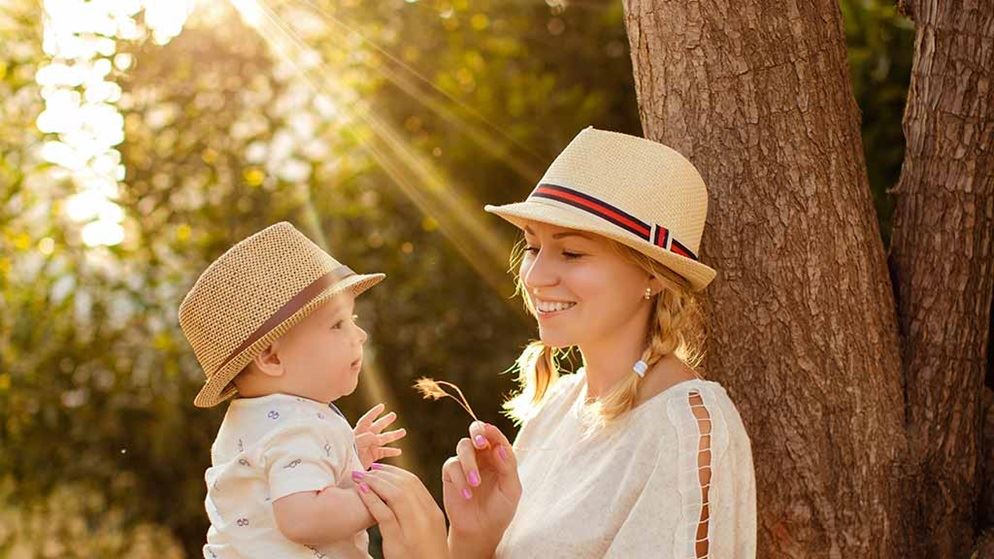 A moment in the sun

Most of us know the drill on how to be sun-safe. Covering up, wearing sunscreen and staying in the shade during the hottest part of the day – we know what to do.

But what about our littlest Australians? While it's a given that young babies' sensitive skin should be kept out of the sun as much as possible, what about when it's not possible to keep them completely covered up or in the shade?

There are plenty of sunscreens on the market claiming to be for suitable for babies and kids, but there's also plenty of conflicting information out there about whether sunscreen is really safe to use on babies under the age of six months.

A quick sweep of supermarkets and chemists reveals a range of sunscreens for sale that are specifically labelled as being suitable for "babies", "babies and kids", "kids" and "juniors".

But flip the bottles over and you'll find an array of advice on exactly who the sunscreen is supposedly suitable for: 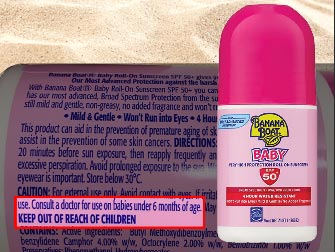 So do little kids and babies really need their own sunscreen? And more importantly, at what age is it actually safe to use sunscreen on babies?

Parents are confused too

A quick poll of parents here at CHOICE and a sweep of parenting forums online reveals a variety of opinions when it comes to using sunscreen on very young babies. Some had been told never to use it on babies under six months, others had been told it was OK in small doses, while others still had not been told anything at all and were under the impression it was fine to use early on. And considering the variety of advice found on products marketed to babies and kids it's no wonder parents are confused!

Do rashies provide enough protection from the sun? See our rashies review.

We contacted some experts in the field of sun protection and asked what the best practice is when it comes to sunscreen and young babies.

The Australasian College of Dermatologists says that the use of sunscreen on young babies under the age of six months is not recommended. The college website says the reason for this is that a young baby's skin tends to absorb more of any chemical applied than would the skin of an older child or adult.

The Cancer Council's position differs from this slightly. It says that if infants are kept out of the sun or well protected from UV radiation by clothing, hats and shade, then sunscreen can be used occasionally on very small areas of the skin.

Dr David Orchard, director of the dermatology department at the Royal Children's Hospital in Melbourne says there's no evidence to suggest that sunscreen is unsafe for babies under six months. "Once a baby is a week old their skin is no different to an older baby or a child." However, he does say that it's better to keep babies out of the sun in the first place.

"Young babies don't move much so it's pretty easy to keep them shaded anyway, but if you are taking them for a quick dip in the ocean, for example, you can use sunscreen on any small areas that can't be covered up with clothing and hats."

Cancer Council CEO Professor Sanchia Aranda says that the Cancer Council's official position is similar to the Australasian College of Dermatologists' but that it's more "realistic". "Some people have a lifestyle where sunscreen is going to be a requirement for even infants occasionally."

Aranda says that shade and clothing should always be the first line of defence but sunscreen is suitable for small areas you may not be able to cover up completely. "Say if they're in the pram for a short period of time and the tops of their feet can't be covered."

Find out which brands performed best in our SPF 50+ comparison test.

This summer in Australia there have been a number of social media posts by parents who claim their child has had sunscreen applied but has still ended up with sunburn or what appears to be an allergic reaction.

While there have been discussions around the effectiveness of sunscreen testing in Australia, skin irritation may not necessarily be a case of sunburn. Both Professor Aranda and Dr Orchard say that some babies and kids may break out in a rash after a day out and about in the sun, but rashes are more likely to be a case of contact dermatitis from one of the ingredients used in sunscreen such as a preservative, fragrance or filler. They may even have had a reaction to grass or even developed heat rash, so it can be hard to pinpoint a cause. Babies' skin is susceptible to reacting, as it's quite thin, but as we age our skin gets thicker and more robust.

So what should you use?

If you are going to use sunscreen on a young baby, choose one labelled as being for sensitive skin or suitable for children. According to Dr Orchard these products will have fewer chemicals that could cause irritation. The alternative, he says, is to choose a zinc-based (physical) sunscreen.

Sydney-based doctor Brad McKay says that mineral-based sunscreens containing titanium dioxide or zinc oxide are considered to be the safest option for babies under six months, as they offer protection from UV light but very little is absorbed through the surface of the skin. "Mineral-based sunscreen tends to leave a white residue on the skin, but this is easily washed off."

Looking for the best baby gear? We run rigorous safety tests on cots, strollers and more.

With sunscreen products labelled "junior", "paediatrician tested" or "baby" in large fonts on the front of the pack, at first glance it may look like there are plenty of products available to use on young babies. But it's only when you go to the back of the pack and check the fine print that you may discover the product in question carries plenty of cautions.

And that's if you can actually read the safety information. Some of the products we purchased (especially on the roll-on products) had labelling printed in such small font size it was barely legible. Sunscreens aren't required to list all their ingredients on the label, just the active ingredients and preservatives. There's no legal requirement to list everything in the product, as sunscreens are classified as therapeutic goods. For people (particularly babies) who have allergies, this is problematic as there is no easy way to find out exactly what's in the product.

Professor Aranda agrees that there is room for improvement, including on Cancer Council products. "What we've realised this summer is that we need better advice and this includes better labelling. Some products and their packaging are very hard to read when it comes to the safety advice."

For all of us:

For more information, see our guide for selecting and using sunscreen.