Weight loss tea - does it work?

Do slimming teas help you lose weight? We look at the evidence. 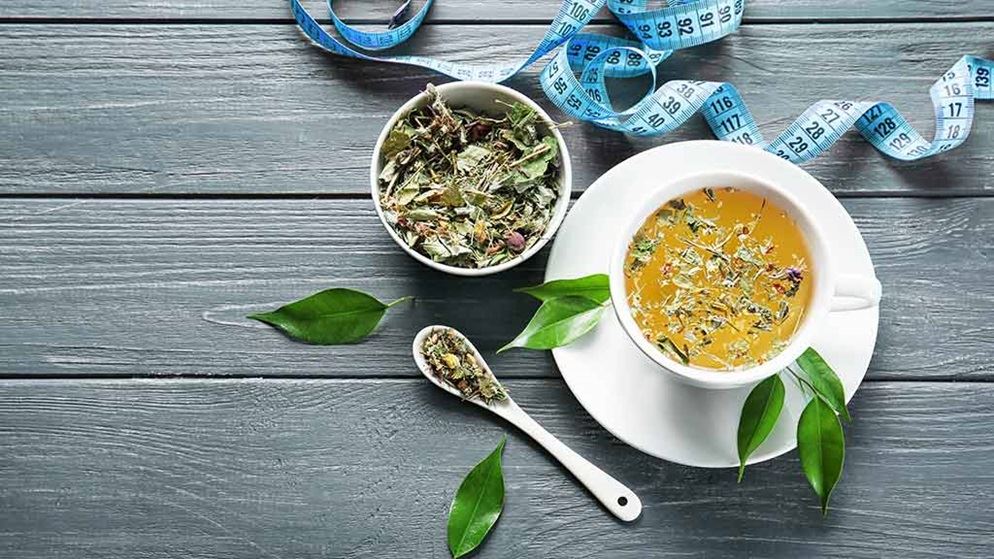 Can you sip yourself slim?

Compared with working up a sweat doing regular exercise, carefully planning out a balanced diet or swallowing supplements, sipping tea is a much more palatable option for losing weight. But can drinking a couple of cups of weight-loss tea every day really help you shed the kilos? We look at the evidence.

Labelled variously as 'slim', 'slender', 'body shape' or 'diet' tea, weight loss teas are widely available online and through retailers including supermarkets and chemists. But despite their popularity, a search of the medical literature turns up little in the way of published research on their effectiveness for weight loss (green tea aside).

So can they help you lose weight? We put this question to three experts:

Associate Professor Ken Harvey of Monash University's School of Public Health and Preventative Medicine gets straight to the point. "There's really no such thing as a tea that helps you lose weight," he says. "It's the usual story – if it's too good to be true, it usually is. If you're drinking them along with eating a healthy diet and doing exercise you might get some short-term benefits, but this will only last as long as you continue to diet and exercise."

Disclaimers on the packs of some weight loss teas along the lines of "This tea can only help slimming or weight control when used in conjunction with a controlled low calorie diet" seem to support Harvey's argument.

What works can depend on what is causing an individual's weight problems. Most of these teas have next to no kilojoules, so if a person is swapping out a highly calorific drink such as juice for a slimming tea then you're going to achieve weight loss as a result."

McGrice adds that the caffeine compounds found in some tea products may be beneficial for weight loss due to their impact on increasing metabolic rate. "Many of the teas contain compounds such as caffeine or the catechins in green tea, which research has shown can produce changes in metabolism – the effects of these compounds are small, but better than nothing. They won't help you lose 10kg but they can have an impact," she says.

Clare Collins, DAA spokesperson and professor of nutrition and dietetics at the University of Newcastle, says weight loss teas might have a powerful placebo effect. "Spending more money on a product changes your expectation about how that product is going to work," she says.

Collins thinks the placebo effect can be used in a positive way. "If splurging on a box of fancy tea bags helps you to commit to eating a healthy diet until the box is empty, you will have made a positive change to your lifestyle."

If the thought of spending money on something you know deep down won't work doesn't appeal, Collins suggests buying a regular box of green or black tea, and spending the price difference on buying more fruits and vegetables instead. "The research evidence indicates higher intakes of fruit and vegetables are associated with a lower risk of weight gain, heart disease, type 2 diabetes, some specific types of cancer and age-related health decline," she says.

Weight loss tea products contain a veritable smorgasbord of botanical ingredients, including a range of different tea leaves, herbs, spices and concentrated herbal extracts. We've listed some of the more common ones below.

Many have a long history of traditional use and are thought to have a variety of benefits , but in most cases more evidence is needed to support their effectiveness. For weight loss specifically there's little published evidence to support their use – at best, more definitive clinical trials are required before conclusions can be drawn.

Camellia sinensis (green tea) contains caffeine as well as compounds known as catechins. These are both thought to assist with weight loss by helping to increase energy expenditure (metabolism).

There have been a number of systematic reviews of studies focusing on green tea and weight loss. Their conclusions indicate a modest - but not always statistically significant - positive effect for some groups of people, which suggests that more research is needed.

Studies on green tea and weight loss: a summary

A 2015 review of five human trials involving more than 300 adults with metabolic syndrome (at high risk of type 2 diabetes and heart disease) compared changes in body weight in participants who were given either green tea, a fermented tea called Pu-ehr, or tea extracts, and those who were given placebo (non-active) tea extracts or no tea at all. The treatment duration ranged from two to six months.

The researchers found that people in the group with the most risk factors for type 2 diabetes and heart disease who were having tea or tea extracts – and who also ate more healthy foods and exercised more – had a weight reduction of about 4kg. This compared to a weight loss of just 350g in the group who had fewer metabolic syndrome risk factors, received the placebo or no tea, and weren't given healthy lifestyle advice.

A 2012 Cochrane Review of 18 studies looking at green tea for weight loss and maintenance in overweight and obese adults (1945 people in total) over a 12–13 week period concluded that green tea preparations didn't produce any meaningful weight loss compared to placebo, and that green tea had no significant effect on maintaining weight loss.

Another analysis of 11 studies looking at weight loss and weight maintenance after green tea supplementation found that regularly consuming green tea extract over the course of at least 12 weeks was associated with a 1.3 kilogram greater weight loss compared to not consuming them.

Cinnamon - specifically the extracts of some cinnamon species - has been found to help improve blood sugar control and may be useful in the prevention and treatment of diabetes, according to a number of clinical investigations, but further trials are needed to establish its efficacy.

Dandelion contains chemicals that may increase urine production, but we could find no evidence to support its use for weight loss.

Fennel is used to help with various digestive problems including bloating, stomach upset and indigestion, but more evidence is needed to determine how effective it is for these uses.

Garcinia Cambogia contains the chemical hydroxycitric acid. It's suggested that this may help with weight loss by preventing fat storage and controlling appetite, although the evidence for this is inconclusive.

Hawthorn, also known as Crataegus pinnatifida, has been found to reduce the symptoms of heart failure and lower blood pressure in some human studies, but not others. Animal studies have also found it lowers blood cholesterol levels, but more research is needed.

Peppermint has been used in traditional medicine in many parts of the world to relieve indigestion. There's some evidence to suggest that taking peppermint oil orally reduces stomach pain, bloating, gas, and bowel movement frequency in people with Irritable Bowel Syndrome.

Senna - also known as Cassia Angustifolia - has a proven laxative effect and is used to treat constipation.

Yerba mate is a plant-based source of caffeine, which is a stimulant and is reported to be beneficial for weight loss due to its impact on increasing metabolic rate, but more evidence is needed to rate its effectiveness for this use.

Weight loss teas are generally considered to be relatively low-risk, but some botanical ingredients can cause harm by themselves and also by interacting with conventional medicines.

Yerba mate, for example, can interact with stimulant drugs such as amphetamines and ephidrine, potentially resulting in increased heart rate and high blood pressure, so shouldn't be taken together. And people with gastrointestinal conditions such as ulcerative colitis or Crohn's disease should avoid using senna.

Either way, it's a good idea to check what's in the tea, just in case.

Food or medicine: how are weight loss teas regulated?

Consumers should be confident that the products they buy are safe and do what they say they're going to do – and regulation is necessary to achieve this. But we're concerned that weight loss teas fall into a grey area at what's known as the food-medicine interface, so aren't being suitably classified or regulated. And we're not the only ones.

"These types of products fall within a grey regulatory area, unfortunately, and companies are getting away with making claims that have little supporting evidence," says Professor Harvey.

Cancer Council NSW (CCNSW) has long been concerned about the potential impact that unsubstantiated health claims can have on people's food choices and ultimately their health.

Clare Hughes, CCNSW nutrition manager, tells us, "We are increasingly seeing claims about products that fall into that grey area between foods and therapeutics. In some cases it's food products that appear to be making therapeutic claims. In others, it's the form of the product – a pill or a powder for example – that suggest the product could be a complementary medicine, not a food. And sometimes the product is an ingredient that could go into a food or therapeutic good."

Regulation around claims for both food and complementary medicines needs to be strengthened so that companies can't exploit grey regulatory areas. If a product doesn't work or causes a problem it should be clear who consumers need to complain to.

Weight loss teas need to be classified as either food or medicine and regulated accordingly. We've written to the ACCC asking them to address this regulatory loophole.

Is slimming tea a food?

If weight loss teas are considered food, then they need to comply with the Food Standards Code, and companies that make a general level health claim about their product must register the food-health relationship with Food Standards Australia New Zealand (FSANZ). Companies are required to have evidence, but the claims are self-substantiated - they haven't been validated or approved by FSANZ – and the evidence isn't reviewed unless a complaint is made about the product.

"Through our monitoring process we raised concerns about a tea that was making weight-loss claims," says Hughes. "We were sceptical that there could be enough evidence to support the proposed food-health relationship so we undertook our own systematic literature review which confirmed our opinion. We challenged the claims and the outcome was that they were removed from the company website."

Hughes is concerned that the self-substantiation process requires specific expertise and time, and may be beyond the capacity of both smaller companies and the enforcement agencies that need to investigate the claims.

"Cancer Council NSW wants to see independent reviews conducted before products get to market. Without this, companies can make profits promoting products' dubious health benefits, meaning consumers are at risk of being duped by claims that don't stand up to scientific rigour," she says.

Is slimming tea a herbal medicine?

When listing a product the company (or sponsor) must certify that they hold evidence it works and that that the claims can be supported. The TGA doesn't look at the evidence for every product that's listed on the ARTG. However, it does conduct some random and targeted reviews of a small percentage of products each year.

Reviews of studies on commercially available complementary medicines have found that while some have been well-studied and found to be effective, many have not, and scientific evidence for their effectiveness is often scant, poor quality and/or inconclusive, if it exists at all.

And according to Harvey, who has been campaigning since the 1970s to improve regulations for the use and promotion of therapeutic goods, "With sponsors of supposedly therapeutic goods now able to choose from a huge list of pre-approved claims backed only by 'traditional use' and not scientific evidence, we'll be seeing even more of this in future."