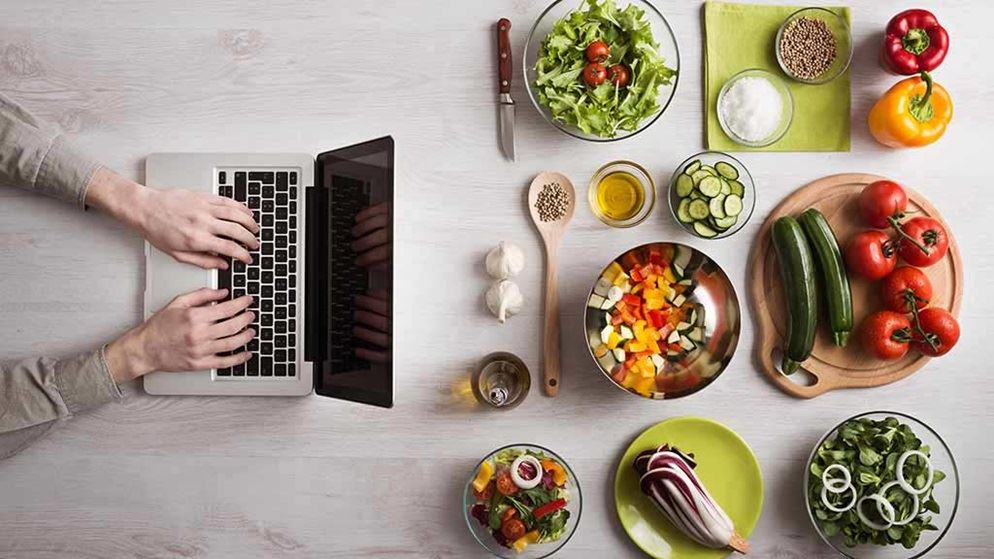 Unpacking the foodprint from meal boxes

Meal boxes can be a real lifesaver for busy households but how do they compare to shopping at the supermarket when it comes to food waste and packaging?

On Sunday night I opened the fridge to see two clean and bare crisper drawers, devoid of the usual bendy carrots, shrivelled ginger or brown, pockmarked eggplant. Far from panicking at starting the week without groceries, I knew that within 12 hours the drawers would be stocked with perfectly portioned ingredients for four tasty dinners that I would never have dreamt up while wandering the supermarket aisles.

My family tried meal box delivery services from five companies for five weeks. It's been a tasty food journey, but one of the unexpected results was a discernible drop in household food waste. No longer do half-used bunches of coriander and unloved leftovers languish in my fridge waiting to be committed to the compost – I'm now cooking chef-like meals and we are lean and efficient food consumers.

Or are we? As I pull apart the cardboard box to wedge it into my recycling bin, and shove more of the plastic-wrapped gel packs into my freezer, I wonder if these kits have shrunk my eco 'foodprint' or enlarged it?

What is a meal kit delivery service?

Meal box delivery services are a newish disruptor in the grocery and meal delivery markets. Usually an online subscription service, each box is delivered to your door packed with chilled, fresh, perfectly proportioned ingredients and recipe cards for two to five meals.

Meal boxes offer a variety of gourmet, simple-to-cook, fresh and nutritious meals and they can help address the problem of food waste. They're big business, too. The Australian market in 2016 was estimated by food industry consultants Technomic to generate around $94.5 million in consumer spending.

What is food waste and how big is the problem?

Food waste is a social, environmental and economic disaster in this country and across the modern world. It's been estimated that Australians throw out four million tonnes or $8 billion worth of food per year (a staggering amount when you consider that Australia's foreign aid contribution for 2016/17 is $3.8 billion).

Australians waste 361 kilograms of food per person per year and food rescue charity OzHarvest tells us this equates to tossing out 20% of the food we buy. And it's not just Australia that has a problem, OzHarvest reports that approximately one third of all food produced around the world for human consumption is wasted.

Food waste has a significant environmental cost in terms of greenhouse emissions.

Up to 40% of the contents of the average household garbage bin is food and it's been estimated that when it decomposes in landfill it generates the equivalent of 6.8 million tonnes of carbon dioxide.

But food waste isn't confined to the household kitchen bin. On top of the 4.9 million tonnes of food households toss each year, another three million tonnes of food is binned at the commercial level. And hundreds of thousands of tonnes of food is wasted at the farm level – crops that are abandoned in the field, culled after harvest, or rejected at market for example. In fact, an estimated 20-40% of fruit and vegetables are rejected even before they reach the shops mostly because they don't match the high cosmetic standards of consumers and supermarkets.

Surely I'm not wasting that much food?

If you think you're above all this wasteful behaviour, consider the research published by the NSW EPA about which groups wasted the most food by volume.

Which services did we try?

How does the delivered meal kit reduce food waste?

A study of the operations of one of the largest meal kit producers in the US, Blue Apron, found the company threw out 5.5% of food, while grocery stores threw out 10.5%.
The researchers found that 62% less food is wasted at Blue Apron's facility and by its customers than the same meals cooked with ingredients sourced from the grocery store.

Blue Apron has a particular focus on reducing food waste, so its achievements aren't necessarily matched by the players in the Australian meal kit service market. But the results show these services can create efficiencies.

Early in the supply chain, meal kit providers can plan what ingredients are needed through the design of a menu. They can buy the exact ingredients, in bulk, in season, direct from the suppliers.

HelloFresh, the first company to launch the concept in Australia in 2012, told us their recipes are planned on a seasonal basis and they often source their produce directly from local growers and farmers. A company spokesperson said, "Having fewer intermediaries not only reduces waste, it means less time in storage or on display than food sold in supermarkets.

"This model...eliminates waste associated with speculative purchasing and deterioration."

A Pepper Leaf spokesperson told us the company buys with the highest standards and minimum waste in mind – which might include buying very small items (e.g. small capsicums) that wouldn't be acceptable to supermarkets. This produce isn't subject to the scrutiny of a picky grocery shopper or the need to fit within a certain packing size.

The Blue Apron study found that cooks threw out 7.6% of the food in Blue Apron meals, instead of the estimated 23.9% they would throw out to make the meal otherwise.
If the recipe in a meal kit only calls for a few sprigs of coriander, two teaspoons of turmeric or one carrot, that is what most of the kits provide. But if I'm shopping from the supermarket, I'm likely to buy a bunch of coriander, a packet of turmeric and a bag of carrots. 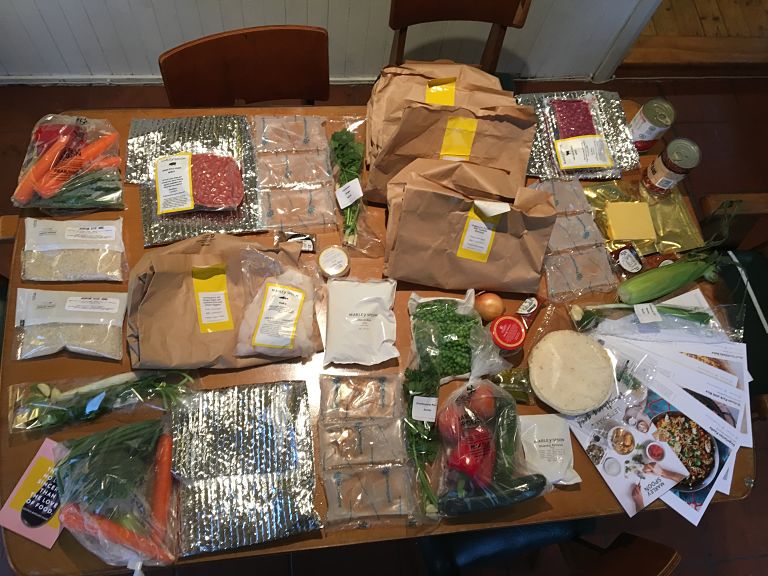 An example of the packaging and portioning of ingredients for four meals in a Marley Spoon meal kit box.

Post-cooking, there's another potential cut in waste with the meal kits. Of the four million tonnes of food that Australians waste per year, it's been calculated that 27% is in the form of leftovers. I bought meal kits designed for four people, to feed my family of five. The portions in all were generally quite generous but we rarely had leftovers.

Aussie Farmers Direct and Hello Fresh told us that any food left over from their operations is donated to hunger relief organisation Foodbank. Marley Spoon donates their recoverable unused food to OzHarvest. And a spokesperson from Pepper Leaf, which operates out of Melbourne, says, "All our green matter is collected weekly by a small herd cattle farmer."

Comparing the impact of transportation of the meal kits with individuals buying food at the grocery store isn't clear-cut thanks to the many variables like distance travelled, the vehicles and the load. Consider also the variations in food miles of products at the grocery store – has it travelled across the country or been flown in?

Personally, my own car use dropped while trying the meal kits as I no longer went to the supermarket weekly.

All of the services we used told us they try to source as much of their products as possible in-season and locally. HelloFresh packs all of its boxes in Sydney and they are shipped via refrigerated transport to ACT, NT, Qld, SA and Vic. The company maximises pallet loads and, as with all of the services, they deliver at night or during off-peak periods.

A spokesperson from Aussie Farmers Direct says, "Our franchisees deliver up to 130 homes in a single round, which works out to be around 5000 food kilometres saved by each round each week." Aussie Farmers Direct has packing and distribution centres in Vic, NSW, Qld, SA and WA, and it aims to source as much of the produce as it can from within each state.

Pepper Leaf sources as much seasonal produce as possible from around Werribee and Gippsland and its packing facility is in Melbourne, delivering to metro Melbourne, Sydney and Adelaide.

Thomas Farms Kitchen packs its boxes in Mount Barker in South Australia and ships them to Melbourne, Sydney and Brisbane.

Marley Spoon packs its boxes in Sydney and then they're shipped to Melbourne, Brisbane, Newcastle, Wollongong and Canberra. They do source some dry and canned goods from overseas.

What about the packaging?

One look at my cardboard and paper recycling bin and it's clear the packaging with meal kit deliveries is in excess of my weekly grocery shop (with or without reusable shopping bags).

Apart from Thomas Farms Kitchen, all of the services we tried packed their kits in cardboard boxes, with frozen gel packs for chilling, and some also have added insulation. The gel packs are re-usable in the home but you have to empty them to recycle them with soft plastics.

Thomas Farms Kitchen (TFK) uses polystyrene boxes, which are generally not recyclable in kerbside recycling. However, Simon Dennis from TFK told us that the boxes and gel packs are collected, cleaned and where possible used again.

Aussie Farmers Direct (AFD) said that if customers left the frozen gel packs out for the next delivery they'd pick them up, wash them and re-use them.

None of the services using cardboard boxes picked up and re-used them. Most services said they continued to seek better recyclability and biodegradability in their packaging, and tried to minimise packaging where possible. The boxes and paper are recyclable but only two services, Pepper Leaf and Hello Fresh used cardboard boxes with recycled content. According to AFD, its boxes have thermal and moisture resistant properties and can't be made from recycled content (but they don't use extra insulation such as bubble wrap).

In the case of Marley Spoon, foil plastic bubble wrap, which isn't recyclable, was used for insulation of proteins.

HelloFresh's insulation and other packaging is made from Polylactide (PLA).

Ingredients in all the boxes were wrapped in bundles or separately in soft plastic, paper bags or plastic containers. Personally, I felt the wrapping of the ingredients was no more than I would have ended up with from a supermarket shop where many of the products are packaged in plastic. But that's a pretty low standard to compare to. 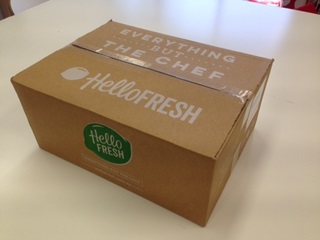 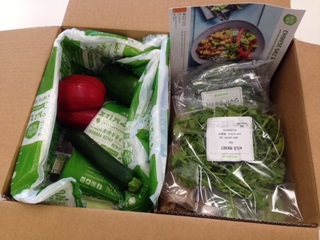 A Hello Fresh box showing the insulation and packaging.

Price per serve: $7.45 to $12.37
Eggs: Free range and organic (1500 birds per hectare in all states excluding WA, which has 900 birds per hectare)
Chicken: Conventional (not free range)
Pork: Free range (Australian Pork certified Free Range) except in WA
Vegetarian options: Only in the Weight Watchers Freshbox range (not vegan)

Is the beef and lamb pasture-raised or feedlot finished?

Every company supplied beef and lamb that was pasture-raised and not finished in feedlots but HelloFresh conceded that if its supplier couldn't deliver the stock it may substitute with feedlot finished beef or lamb. The other exception was AFD's service in WA because, it said, "Most of the year it's finished on feedlots due to the WA climate."

With two parents working full time, the delivered meal kits are a welcome service in our household that have reduced trips to the shops and anxiety over what to cook. Not only are we eating a wider variety of healthy meals, the children are able to get involved in the meal preparation by following the recipe cards.

If the mounting cardboard boxes could be swapped for re-usable, insulated containers that were collected at the next delivery, I'd have few qualms about paying the extra money for this service.

Apart from Aussie Farmers Direct, these services often have substantial discounts for first-time users. AFD allows you to order up to midday the day before delivery, but the other services require a longer lead time.