These seemingly harmless products found in most Australian homes can pose a serious risk to children. As unbelievable as it may sound, it's not illegal to sell unsafe products in Australia.

While many of us may assume the products on our shelves are tightly regulated, the ACCC has reported that unsafe products are causing two deaths and 145 injuries every day.

And some of these products are surprisingly common – in fact, half of all Australian homes are estimated to contain a recalled product.

According to Dr Ruth Barker, a paediatrician and director of the Queensland Injury Surveillance Unit, children are particularly vulnerable to product-related injuries.

"The way children interact with products can take parents by surprise, and manufacturers are failing to use the information available to them to design products that minimise the risk to children," she says.

Worryingly, the ACCC estimates that 33% of children are exposed to unsafe recalled products in their homes.

What's the risk?: Their shape and size make them easy for children to swallow, and if they become stuck on the way to the stomach they can cause severe burning which can be fatal.

How many people are injured?: Around 20 children present to hospital emergency departments every week in Australia due to a suspected button battery ingestion or insertion. Parents often aren't aware their child has swallowed a button battery until it's too late. "The symptoms are vague and often misdiagnosed as something minor like a virus," says Barker.

Do they have safety standards?: There is a mandatory standard for toys designed for children aged three and under which requires that battery compartments are secure. However, in other household items there is only a voluntary code. In a recent CHOICE button battery safety test 10 out of 17 common household products failed.

How to stay safe: CHOICE product safety expert Chris Barnes advises to look for a sturdy, screwed-down battery cover, though the safest option is a product that doesn't use button batteries at all.

Join our campaign to demand an end to dangerous button batteries.

What's the risk?: Bunk beds with insufficient guardrails and unsafe gaps can cause falls, limb injuries and even strangulation or accidental hanging.

"It's often the kids who are playing on the bunk who are injured," Barker says. "But unfortunately there have also been some deaths due to kids falling from bunk beds during their sleep."

How many people are injured?: Around seven children a week were admitted to hospital from 2006 to 2012 due to injuries associated with bunk beds, and there were two bunk-bed related deaths between 2004 and 2014.

Do they have safety standards?: A mandatory standard was introduced in 2005, but according to the Victorian Injury Surveillance Unit (VISU), this hasn't reduced the number of bunk-bed related injuries.

How to stay safe: The ACCC recommends checking that guardrails, fasteners and connectors are secure and advises that children under the age of nine shouldn't sleep in the top bunk bed.

What's the risk?: According to VISU, the most common cause of injuries is children falling from the cot. While less common, the most serious hazards according to Barnes are "head and limb entrapment and strangulation caused by clothing snagging on protruding parts of the cot".

How many people are injured?: Around two children a week were admitted to hospital from 2006 to 2012 due to injuries associated with cots. And there were 11 cot-related deaths in 2004 to 2014 – eight because of entrapment in a cot and three due to positional asphyxiation (where a baby falls asleep in an unsafe environment/sleeping position).

How to stay safe: Barnes says that parents can take some simple precautions when buying a cot. "Look for certification to the mandatory standard AS/NZS 2172, stick to the major brands and check things like the strength of the bars and the sturdiness of the structure yourself," he suggests.

He cautions against buying from eBay or unfamiliar online stores. "You'll sometimes see false safety claims made for dodgy cots online," he warns. The ACCC has also observed frequent violations for both cots and bunk beds bought online.

Our cot reviews reveal which models have passed our key safety tests.

What's the risk?: "The biggest problem is babies falling down stairs," says Barker. However, walkers can also allow infants to access hazards they couldn't otherwise reach like benchtops, ovens and utensil drawers. Walkers have also been linked with delays in learning to walk.

How many people are injured?: Around seven children per year were admitted to hospital from 2006 to 2012 due to injuries associated with baby walkers. "While the numbers seem small it is important to note that 80% of the injuries recorded in Victoria occurred in babies less than one year of age," says VISU data analyst Dr Jane Hayman, "so baby walkers are still a dangerous product for this age group."

Do they have safety standards?: There is a mandatory safety standard for baby walkers, but Kidsafe and SA Health recommend that they aren't used at all and they've been banned in Canada for 15 years.

How to stay safe: The ACCC advises that parents stay within arm's reach of their child at all times and limit use to 15 minutes at a time.

What's the risk?: The hot steam can cause third-degree burns and poisoning can occur if children swallow the essential oils used in the vaporiser.

How many people are injured?: A recent study found that roughly one child a month was treated for vaporiser steam burns at the Royal Children's Hospital's outpatient burns clinic in Victoria over a 10-month period. Barker also notes that poisoning from ingestion of essential oils used in vaporisers can occur.

How to stay safe: Avoid using vaporisers altogether. According to Barker there's no evidence that vaporisers are effective in treating colds in children. "They're a waste of money," she says. 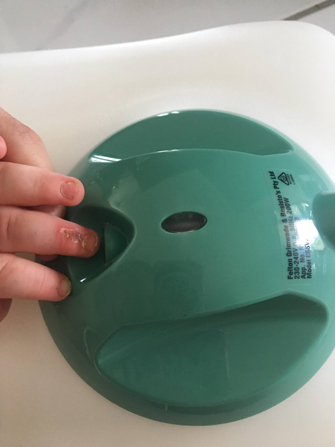 Diamond's son injured his hand after placing his finger in the vaporiser's steam vent.

Diamond's 10-month-old son sustained third degree burns from a vaporiser which was placed on the floor as advised in the instruction manual.

"I heard a bloodcurdling scream and saw him sitting on the floor in front of the vaporiser," she recounts. "He had put his finger into the hole where the steam comes out."

While the instruction manual also advised that the vaporiser shouldn't be used by children and that children should be supervised so they don't burn themselves on the steam, Diamond was surprised by how dangerous the product's design was.

"All they needed to do was put a cap over the centre where the steam comes out so that little fingers couldn't get in. Products should need to be approved before sale or they shouldn't exist."

Mother-of-two Katherin had a close call with a toy phone gifted to her daughter. When replacing the batteries the cover broke, leaving the button batteries inside exposed.

"The screw popped right through the hole and broke the cover," she says.

A friend advised her to "just put some sticky tape over it, it'll be fine." Fortunately Katherin was aware of the risk and she threw the toy away.

According to CHOICE expert Chris Barnes, a flimsy battery cover like this would probably fail the mandatory standard. Katherin says she's surprised that it's not illegal to sell unsafe products in Australia.

"They should have laws, especially in the $2 shops where the toys are cheaply made," she says.

Why are dangerous products on Australian shelves?

In other countries including the UK and Canada, it's against the law for businesses to supply unsafe products. This law, usually referred to as a general safety provision, doesn't exist in Australia.

CHOICE head of campaigns and policy Sarah Agar describes this as a huge loophole in Australian law.

According to an ACCC spokesperson, our current product safety system is highly reactive, meaning that Australians are being exposed to dangerous products which are only recalled after somebody is injured or has died.

"Despite our best efforts unsafe products continue to enter the market and unnecessarily harm consumers," the spokesperson says.

"If a business receives lots of complaints about a safety issue, they may choose to run a recall. But how they run it is up to them, and it's often quite a while after the safety issues are identified," she says.

A general safety provision would mean that consumers could reasonably assume that the products on Australian shelves are safe.

"This law would force businesses to be proactive from the start by ensuring products are designed safely," says Agar.