Rising rates on low-interest cards from the big banks

The official cash rate has dropped but the big banks haven't been passing on the benefits to consumers when it comes to low-interest credit cards.

Three of the big four banks have increased interest rates on their 'low' rate cards since 2013, despite the official interest rate falling to record lows, according to our latest analysis of data provided by comparison site Mozo.

Want to find out which credit card has the lowest interest rate? Check out our story on low-interest credit cards.

Official interest rates have been on the decline for the past four years. Interest rates were at 4.75% in June 2011 and since then have more than halved to reach the current level of 2%. But it seems the big banks haven't been passing on the benefits of this to their customers when it comes to low-rate cards.

The interest rates on ANZ, Commonwealth Bank, NAB and Westpac low-interest credit cards have moved by less than 1% over five years, with most rates increasing from 2013. Westpac was the only big bank which didn't increase the interest rate on its low-rate card over the past five years, keeping it consistently high at 13.49% at a time when the cash rate dropped by a massive 2.75%.

Not only have the big banks failed to drop their interest rates on low rate cards since 2013, they also don't necessarily offer the best deal.

"Not one supposedly 'low' rate credit card from the big four banks is close to the best rate available to consumers, which is 8.99%, offered by Community First Credit Union," says Erin Turner, campaigns manager at CHOICE. 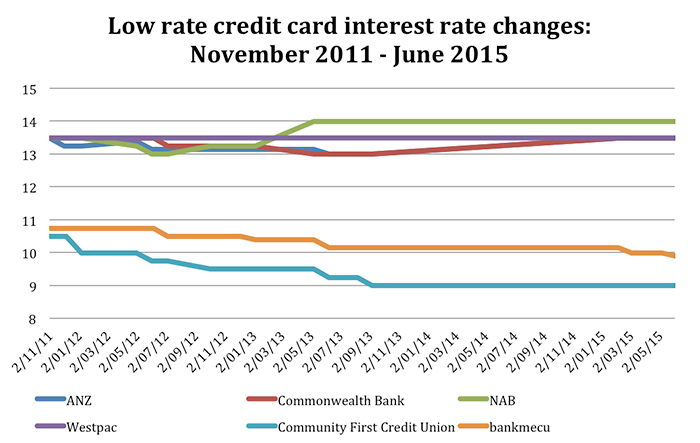 "The number of 0% balance transfer offers on the market has grown from 10 in June 2011 to 112 now – that is a staggering tenfold increase in these types of offers. Zero percent introductory purchase rate offers follow a similar trend, surging from three in mid-2011 to 47 now," says Ms Turner.

While it might seem like a good deal, many balance transfer deals have a sting in the tail and revert to an average 20.09% rate when the promotion period ends.

"Amazingly, they don't even revert to the card purchase rate, with the big banks opting instead to punish consumers with the higher cash advance rate."

CHOICE will be presenting its detailed findings as part of a submission to the upcoming Senate Committee on Economics inquiry into Matters relating to credit card interest rates.