What's in a sausage?

CHOICE fires up the barbie to investigate what fillers, additives and mystery meats are in a sausage. 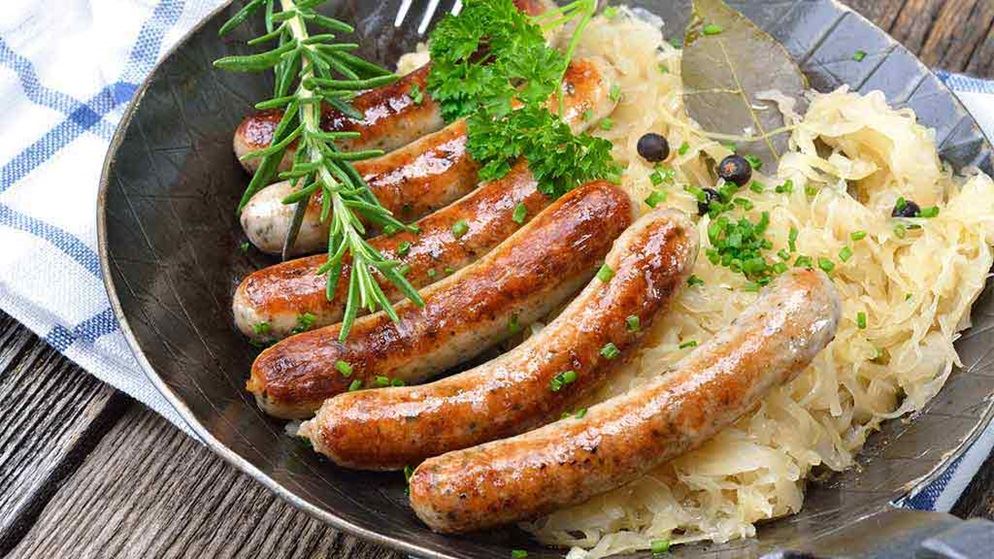 Sausage: the everything meat

Sausages were once the perfect example of up-cycling: leftover meat, organs and blood in a handy package that, in an age before refrigeration, could be cured with salt and spices for eating later. Times have changed, but have sausages? We investigate what you'll find in a sausage today, bought from the supermarket, and from a shopping centre, gourmet, or organic butcher.

''A traditional sausage is meat, fat and seasoning in a natural casing which is made from intestines,'' says Romeo Baudouin, head chef at Victor Churchill butchers in Woollahra, Sydney. ''The use of cereal fillers is a British custom stemming from the first and second World Wars, when meat shortages led to breadcrumbs and flour being added. That practice continues today as people got used to the taste – it also requires less meat, making them cheaper to produce.''

As well as meat and fat, high on the ingredients list you’ll see fillers or binders such as rice, flour, maize, hydrolysed vegetable protein, potato and tapioca starch, and rusk (wheat). A little water is required to bind the meat and fillers, but more might be used to add bulk to mass-produced sausages which are sold by weight.

We found a variety of intriguing additives on ingredients lists that add flavour and colour while keeping costs down for manufacturers. These included sugar, spray-dried wine, HVP preservative, yeast extract, natural roast beef flavour and smoke flavour. Most mass-produced or butcher-made sausages use preservatives to inhibit bacteria growth and delay the grey-brown oxidisation of meat. Sulphur dioxide (220), sodium and potassium sulphites (221-225 and 228) are permitted in sausages at a limit of 500mg per kilogram, but could cause problems for people who are sensitive to sulphites. There are no regulations limiting the level of sodium in sausages and, although offal is allowed, it must be declared in the ingredients list or to consumers at the butchers.

The lowdown on labelling

Food Standards Australia New Zealand (FSANZ) specifies that fat-free meat flesh must make up at least half the total weight of the sausage, and that the fat content should be no more than half the weight of the fat-free meat flesh. Fat-free meat flesh is broadly defined as ''the skeletal muscle of any slaughtered animal, which can include any attached animal rind, fat and connective nerve, blood, blood vessels and, in the case of poultry, the skin''. If the label specifies a particular type of meat, such as beef, the regulations say it should contain beef.

We discovered that working out the ''fat-free meat flesh'' content of a sausage is not so simple. It took several emails and phone calls to various authorities to establish that when an ingredients list says pork (70%) it refers to the combined total of fat-free meat flesh and fat.

For example, in order to work out the lean meat content of Welsh Dragon sausages, you'd firstly have to look at whether there is any other ingredient containing fat in the ingredients list. If not, you take the total fat per 100g in the nutrition panel – in this case it’s 19g fat – and subtract that from the 70g/100g (70%) pork, to discover there is only 51% of fat-free lean meat in the sausage.

The definition of 'meat'

If you see ''meat'' in the ingredients list, the product may contain ''the whole or part of the carcass of any buffalo, camel, cattle, deer, goat, hare, pig, poultry, rabbit or sheep, slaughtered other than in a wild state”. Butchers are exempt from labelling requirements if products are sold unpackaged, but they're obliged to supply that information if asked, and must indicate when a food contains added sulphites in concentrations of 10mg/kg or more.

For consumers concerned about undisclosed offal; despite the usual myths about eyes and innards, your sausage is most likely offal-free. One meat industry insider pointed out that offal fetches good prices in overseas markets, so it’s not cost-effective to waste it in sausages here in Australia. And, in any case, offal is generally stripped out of the carcass before it’s delivered to butchers. 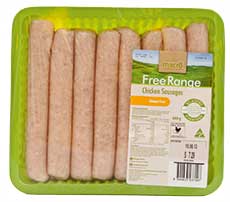 ''To pick a quality sausage you should be able to see the mixture of lean meat and fat through the casing. It should look appetising and the skin should be plump and dry, not damp or slimy,” says Baudouin. “A natural casing will not be shiny, and you should barely be able to see it. When you cook it, the skin shouldn’t shrink and peel away. The casing should be married to the meat and keep the sausage moist."

George Papanicolaou, from Dulwich Hill Gourmet Meats in Sydney, agrees. “Don’t be scared of a little fat in the pan when you cook the sausage. A sausage that releases no fat when you cook it can mean it has too many binders, and this can mean all the fat is held in the sausage. The more fat in your pan, the less fat you end up eating.” Don’t pierce a sausage in the pan, as all the juices and flavour will leak out, and always cook over a medium heat or the sausage skin may split.

We cooked six varieties of beef sausages and measured the fat left in the pan. The gourmet, independent butcher and organic snags left up to 30ml of fat in the pan (from eight sausages), while the supermarket varieties released so little fat they were hard to cook.

Price can be an indication of quality. Breakfast sausages are often cheaper because they’re made with lower-quality cuts of meat, or a combination of different meat off-cuts. Finely ground, dense sausages could also be hiding poor-quality meat, an excess of binders, or more water than is necessary.

Is there a healthy sausage?

Sausages are not a health food. Due to the link between processed meat, red meat and colorectal cancer, the Cancer Council advises limiting or avoiding processed meats such as sausages, frankfurts, salami, bacon and ham.

''The high fat and salt levels mean sausages should only be eaten sometimes – about once a fortnight is appropriate,'' says Pip Golley, spokesperson for the Dietitians Association of Australia. However, Golley acknowledges that many young children don’t get enough iron and zinc, and beef sausages can help raise levels in fussy eaters in the context of a healthy diet.

When choosing a healthier sausage, Golley recommends one with:

We searched around for a healthier sausage during our investigation in July 2013, and it proved a challenge. We looked at more than 50 supermarket sausages and found fat content ranging from 3.8g (1.4g sat fat) to 18.4g (9.1g sat fat) per 100g. When comparing across brands, use the per 100g value rather than per serve, as we saw sausage weights ranging from 45g to 84g. Sodium content ranged from 410mg per 100g to 868mg.

The Woolworths-owned Macro Free Range chicken sausages contained 5.4g of fat and 480mg of sodium per 100g, but also had many processed ingredients. Woolworths Chicken Sausages had identical ingredients to Macro but a higher fat content of 10g. It’s also interesting to note that the label of Macro brand was suspiciously similar to the well-known brand Lilydale – which is not sold at Woolworths, but available from rival Coles.

In July 2013, we bought six different varieties of plain beef sausages and had them independently analysed for lean meat content, fat, sodium and sulphur dioxide levels per 100g. Only the Woolworths, Aldi and Coles sausages had nutrition labels and ingredients lists. The sausages we tested were:

We didn't sample sausages from IGA supermarkets, as they often source sausages from local butchers rather than offering a standard range across stores. 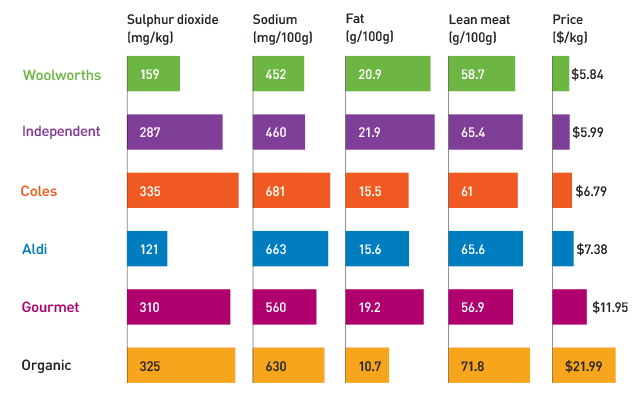 All sausages complied with FSANZ regulations, although with the minimum level of lean meat required to be 50g per 100g, the gourmet (56.8g) and Woolworths (58.7g) sausages had the lowest proportion. The sausage with the highest lean meat content and lowest fat levels was the organic, but it was the most expensive at $21.99/kg, and had the second-highest sulphur dioxide levels. Aldi claimed its sausages had 948mg/100g of sodium, however our testing showed they had 663mg which, although still very high, was 285mg less than the amount stated on the label. Although the independent had the highest fat (much of which seemed to end up in the pan), it had a good level of lean meat, the lowest salt and – overall – seemed like a good buy at $5.99/kg.

But how did they taste?

We hosted a sausage sizzle in the CHOICE kitchen and 11 hungry staff members did an informal blind taste test of the six sausage varieties.

It seems that sausage preference is hugely subjective, and people’s perception of salt and fat varies widely from the actual amounts in the sausages.

Although FSANZ sets regulations around sausages, it's the state and territory agencies that enforce the standards. In each state, we spoke to butchers who said council inspectors visit their premises randomly every three to six months, although a wholesaler in Tasmania said she sent her own samples for testing rather than having random audits.

Inspectors test sausages for sulphite, meat and fat levels, and sometimes the species of meat used, if a claim is made on the label. Food authorities also test sausages if they receive a complaint.

There are currently 14 non-compliant butchers on the NSW Food Authority name-and-shame list for excessive sulphites in sausages. The system isn't fool-proof and regulations vary in each state. In Queensland, for example, penalties range from $550 for selling non-compliant food to $275,000 for misleading conduct, such as selling beef sausages that contain another species of meat.

The snag with organic sausages

Consumers often choose organic because they're happy to pay a premium for foods with no or fewer chemicals – so we were concerned to find that of all the sausages we tested, the certified organic sausage had the second-highest level of sulphur dioxide (220) with 325mg per kilogram. According to the National Standard for Organic and Bio-Dynamic Produce, sulphur dioxide is not a permitted additive in organic meat products. The only organic product it's permitted in is wine.

The organic sausages we bought from the butcher for testing featured the logo of organic certifier OFC (Organic Food Chain) on the label. When contacted, OFC said that the placement of the certifying logo in the butchery was ''an error… and he never intended to sell the sausages as certified organic, only as organic. The OFC reference has now been removed".

Later that day, we found the OFC logo had been covered over by the butcher. The manufacturer of the same organic sausages displayed the logo of an accredited certifier, Australian Organic, on its website, despite the sausages not being certified at all. This incident illustrates the community’s confusion about organic and certified organic products. As there is no legally enforceable definition of organic in Australia, it’s really left to the interpretation of the manufacturer or seller, which makes it hard for consumers to judge the integrity of the product.

In contrast, if a product is certified organic it's been checked by one of seven certification organisations accredited by the Department of Agriculture. However, under the current regulatory system, if companies don’t comply with the standards there is no legal redress - although the ACCC will investigate complaints.

Exported organic produce must be certified to the National Standard, but for the domestic market certifiers can use their own standards which must be in line with the voluntary Australian Standard (AS 6000). Andre Leu, president of the International Federation of Organic Agriculture Movements, believes organic certification should be brought under a national regulatory system such as in the US, the EU, India and China, where organic claims must comply with one overarching, legally enforceable standard.