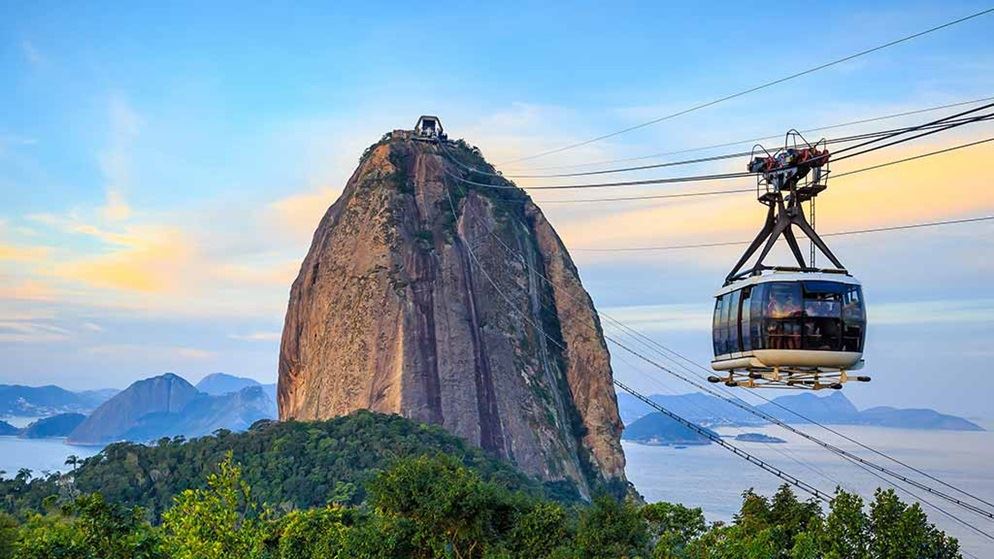 Flights from Australia to Brazil

Rio de Janeiro and Sao Paulo have efficient but limited metro systems, as well as connecting buses that link stations with outlying areas. The metro is a relatively safe and affordable way of getting around. Both cities also have an above-ground suburban train network.

Tip: The last carriage on every service is women-only (you can't miss it – it's painted bright pink).

Brazil has very few intercity or long distance passenger train lines, rather just a few scenic lines mostly used by tourists. There are inter-country rail links between Brazil and Argentina, Uruguay and Bolivia.

Brazil's towns and cities are connected by an extensive network of long-distance bus routes. Services are mostly clean, safe and on time. There are three classes of bus travel, the most expensive of which are the sleeper buses for overnight trips.

There are plenty of competing bus companies to choose from, but the easiest way to find a good fare is to search on buscaonibus.com.br, clickbus.com.br or brazilbustravel.com. Tickets can usually be bought at bus stations, but it's a good idea to book ahead if you're travelling on the weekend or at peak holiday times.

Buses are also the most common way of getting around cities. Sao Paulo and Rio both have dedicated bus lanes and extensive bus networks which cover more ground than the metros.

Rio has around 450km of cycle lanes, making biking an appealing alternative to joining the crowds taking taxis or public transport. Bike Rio is the city's bike share program, with stations in over 250 locations. To rent a bicycle, you'll need to register on the website or via the app, buy credit, then use your phone to unlock a bike. The downside for international visitors is that you'll need a Brazilian phone number.

Sao Paulo also has a bike share system, Bike Sampa. The car-congested city isn't quite as bike-friendly as Rio, but it's getting there.

Outside of the cities you'll find very few bike lanes, but the roads are reasonably safe and cycling can be a great way to see the more rural areas if you don't mind breaking a sweat.

Catching a taxi is usually less stressful than navigating public transport or hiring a car, although the cost can add up if you get stuck in bad traffic.

In Rio, yellow cabs are metered, but watch out for yellow cars illegally posing as taxis. Official yellow cabs will have a blue strip on their side. Fares are relatively cheap, although rates are higher from 9pm to 6am Monday to Saturday and on Sundays and holidays. Radio taxis, which are blue, green or white, are more expensive, but they charge a fixed rate so you'll have no nasty surprises. Most radio taxis accept credit cards, but most yellow taxis only accept cash.

In Sao Paulo, standard taxis are typically white, while Guarucoop radio taxis are blue and white. As in Rio, be careful not to get into an ordinary car posing as a taxi. Fares can be quite pricey, particularly when traffic is bad and at peak times (prices go up after 8pm and on weekends). Radio taxis, which must be booked ahead, usually accept credit cards but you'll need cash for the white taxis.

It's no use trying to use your Uber app in Rio as the city has banned ridesharing services (other Brazilian cities still allow them). Easy Taxi is a commonly used English-language taxi booking app which allows cashless payment, similar to Uber.

Tip: Most taxi drivers don't speak English so make sure you have your destination written down, just in case your pronunciation isn't up to scratch.

Avis, Budget and Hertz, as well as a number of local companies operate out of Brazil's major international airports, however you may find a cheaper deal if you pick up your rental car from somewhere other than the airport. In Rio, there are plenty of options along Avenue Princesa Isabel in Copacabana.

The big international companies are often a safer bet, as they're easier to deal with if something goes wrong.

Tip: Most companies will only rent to drivers over the age of 25.

Zipping around on a motor scooter may sound more appealing than sitting in traffic and trying to find a park in a rental car. It's also a lot cheaper. However, be aware that your travel insurance is unlikely to cover you for a scooter accident. If you don't have experience driving a scooter or motorbike, it's best not to even consider trying it for the first time in a foreign country. In fact, some scooter hire companies refuse to rent to drivers with no experience on two wheels.

See the Brazil laws and culture guide for tips on driving.

You can search for and book hotels, resorts and hostels online through sites such as wotif.com, booking.com or hostelworld.com. Compare booking sites and the hotel's website (if it has one) to find the lowest price. Check reviews on tripadvisor.com before you book.

hiddenpousadasbrazil.com is a good place to search for a bed and breakfast (known in Brazil as a pousada).

Brazil travel checklist A traveller's checklist before visiting Brazil. Includes advice on visas, vaccinations, insurance, money, SIM cards and what to pack.
Brazil visa guide How to apply for a tourist visa to visit Brazil, passport requirements and what to expect at the airport.
Brazil currency and travel insurance The best way to carry Brazil currency and how to get the best value Brazilian real, plus travel insurance tips.
Brazil laws and culture Brazil laws, driving in Brazil, and culture for travellers – the things to remember that are different from Australia.
Brazil health and safety Is Brazil a safe travel destination? Find out with our guide to the Zika virus, vaccinations, hospitals, emergency contacts and safety tips.
Brazil travel scams Common scams to watch out for when travelling to Brazil.