Our shadow shop of Harvey Norman, JB Hi-Fi and the Good Guys found that salespeople are still struggling to understand consumer guarantees. 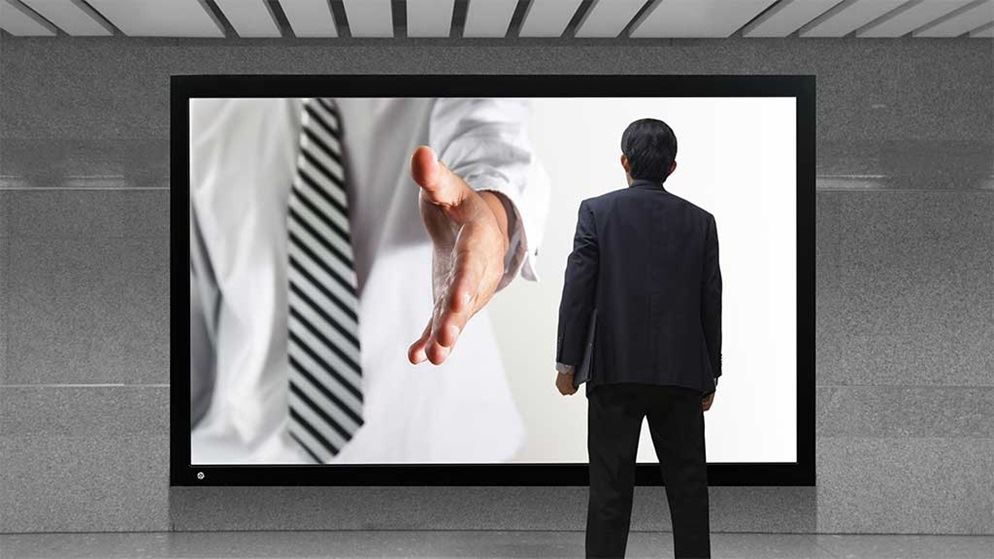 With the Christmas shopping season upon us, there's still plenty of confusion out there about consumer guarantees and your right to return faulty goods. When we called salespeople from Australia's major electronics retailers across the country to ask about buyers' rights, we were told some pretty outrageous and inaccurate tales.

We shadow-shopped 109 Harvey Norman, JB Hi-Fi and The Good Guys stores across the country. The results were troubling: nearly half the salespeople failed our shadow shop. The results reveal that the Australian Consumer Law (ACL), almost five years after its introduction, is either being ignored or is misunderstood by salespeople.

While the results were better than in our 2013 shadow shop there is still a long way to go.

In this report you can find:

Read our report about smart shopping apps that let you store receipts and track your spending through your smartphone.

A shadow shopper posed as a customer looking for a big-screen TV priced between $2000 and $3000. We called salespeople in 109 stores – either Harvey Norman, JB Hi-Fi or The Good Guys – asking if the store would take the TV back to get it repaired if it broke down around two years after we bought it (as with most TVs, the ones we shadow-shopped come with a one-year manufacturer's warranty). JB Hi-Fi offers two-and-a-half years voluntary warranty (including manufacturer's warranty), so our callers also asked what would happen if the TV broke down shortly after this warranty ended.

Video: Our video campaign shows you can't take a salesperson's word when buying a big-screen TV.

We checked with the ACCC's deputy chair Delia Rickards: "The consumer guarantees are not limited to a set period of time. Instead, they last for the amount of time that is reasonable to expect depending on factors including the nature and price of the item or any representations made about the item. What is in fact a 'reasonable time' will ultimately depend on the circumstances of each case. This means that suppliers and manufacturers could still be obliged to provide a remedy to consumers even after any warranty provided has expired."

So the right answer in our scenario is that the retailer would take the TV back, and assess on a case-by-case basis whether or not it would be covered. Salespeople were scored as "failed", if they told us:

We did not require that the salespeople mention the consumer law or explain it correctly.

And the results are in

Five years after the introduction of the Australian Consumer Law (ACL) 48% of salespeople got it wrong.

This result was an improvement on our 2013 shadow shop which found that 85% of salespeople misrepresented consumer rights saying that the store has no responsibility to repair, replace or refund a purchase.

While the results improved over the last two years, there's still a long way to go. Considering that the ACCC has prosecuted a number of stores for violations of the consumer law, it's surprising that the message still did not get through to nearly half of the salespeople we called.

Similarly to in 2013, nearly all salespeople still tried to offer us an extended warranty. 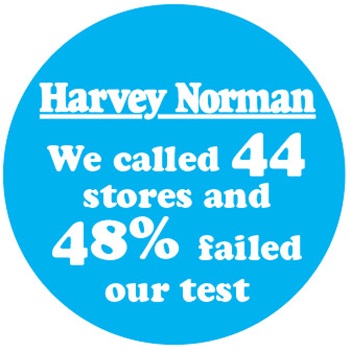 We called 44 Harvey Norman stores and 48% failed our test. Some salespeople told us scary things like, "It's going to cost you out of your pocket. You'll have to get in a technician, it could cost you thousands." But others gave us correct information like, "It's a bit of a grey area. It depends on what's wrong and what the expectations are for how long it should last for how much you paid."

Included in our calls were nine Harvey Norman stores at locations where franchisees had been prosecuted by the ACCC and fined for breaches of the consumer law. Disappointingly the salespeople of six of these stores still failed our test. We have given the ACCC the names of the stores which failed.

Update: In January 2016 a 10th Harvey Norman store, the Superstore in Bundall, Queensland was fined $52,000 for breaching the ACL. The court held that sales representatives made ten false or misleading representations concerning the existence, exclusion or effect of a guarantee or right, when they made statements to two consumers.

ACCC actions have now resulted in a total of $286,000 fines against 10 Harvey Norman stores.


Harvey Norman extended warranty: All but one of the salespeople offered an extended warranty called Product Care. In some cases, Product Care offers additional benefits to the consumer law. For example, you have the right to ask for a replacement if your product has only a minor fault – a fault that could be repaired. Under the consumer law the retailer can choose to repair the product rather than replace it if it has a minor fault.

Michael Mecham, corporate compliance officer at Harvey Norman, explains the benefit: "Examples of minor product issues that have resulted in customers taking up the replacement option in the past include faulty ice makers on an otherwise working fridge, faulty keys and track pads on laptop computers and full replacement of printers when they print intermittently because of paper feed issues." It also covers wear and tear, which the consumer law doesn't.

However, while the other two retailers we shadow-shopped have a cooling-off period for their extended warranties, Harvey Norman doesn't offer one. 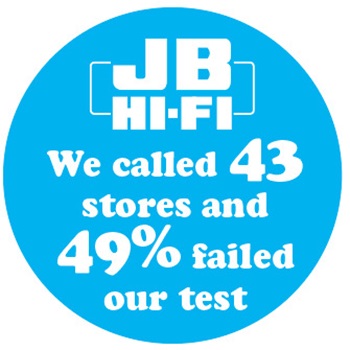 JB Hi-Fi is the only retailer in our shadow shop that offers a 'voluntary warranty period' on top of the manufacturer's warranty. The length of the period depends on the price and type of product. In the case of a TV worth more than $2000, they offer a total warranty period of two and a half years.

Under the ACL, your TV would likely also be covered during the same period if you bought it from another retailer, but it's fair to say that the JB Hi-Fi warranty provides more peace of mind and could mean less hassle if something goes wrong. If we had only asked JB Hi-Fi what would happen if a TV broke down after two years, the results would have been different and much more in favour of JB Hi-Fi.

We asked the sales staff what would happen just after the voluntary warranty period expired. A number of problems were revealed and salespeople in 49% of the 43 JB Hi-Fi stores we called failed our test.

The main cause of failure was that many salespeople told our callers there was no cover after the voluntary warranty had expired: "Once the warranty is finished then it's heartache. We give you an extra year. That's our courtesy to you. Once that has finished then there is nothing we can do." Only some salespeople explained it correctly: "There is never a time when you'll get a straight 'No', the manager will look at it on a case-by-case basis."

A few salespeople also told us that JB Hi-Fi had a "signed statutory agreement with the ACL" or they had an "understanding" with the ACCC.

We checked with a JB Hi-Fi spokesperson: "We have discussed our voluntary warranty with the ACCC and taken feedback from them into account. However, we do not have any agreement with the ACCC and they have not 'signed off' on it – we make this clear to our staff in our training."

The JB Hi-Fi spokesperson also agrees that there could still be cover after the voluntary warranty has run out: "The time periods … are minimum voluntary warranty periods." The spokesperson also explained that the customer can escalate the problem to the store manager and after that to company management if needed: "The matter would be considered on its merits and it is quite possible that the customer would be offered a remedy of some sort. There are many cases where this has occurred."

Additionally, some salespeople got the time period of the voluntary warranty period wrong and told us only about a 12-month extra warranty – two years in total (we didn't fail a salesperson for that).

Major and minor faults as well as wear and tear is covered for periods up to three years after the voluntary warranty – this means up to five and a half years for electrical items over $4000.

Also, on the plus side, JB Hi-Fi provides a 15-day cooling-off period. 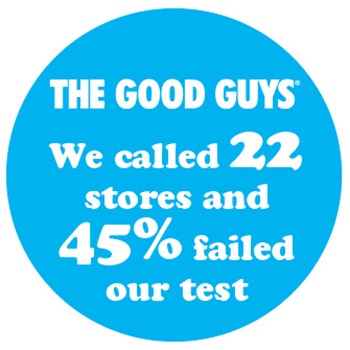 We called 22 stores and 45% failed the test. We received responses from some salespeople like, "There is nothing I can do. You have to talk to the manufacturer once it's out of the 12 months manufacturer's warranty – nine times out of ten they won't help you." But other salespeople gave good explanations of the consumer law such as, "It depends on what the problem is, how long you've had it, what kind of TV it is."

The Good Guys extended warranty: The Good Guys offer an extended warranty called Concierge, with some unusual features such as a store credit refund of up to $100 if the price of the product you bought drops within 30 days of the purchase date, as well as 60 days of unlimited tech support including software installation. Concierge also includes a 14-day cooling off period – the Good Guys told us they are currently reviewing whether this period will be extended.

It's disappointing to see that such a large number of salespeople are still struggling to acknowledge basic consumer law principles in sales conversations with their customers. This may be one of the reasons why in a recent CHOICE survey of 1024 Australian consumers, only about a third of respondents said they felt confident that the ACL would protect them.

The ACCC has repeatedly raised concerns that consumers are paying for extended warranties that don't give them any extra protection.

In December 2015, the ACCC negotiated a court enforceable undertaking with Lumley, a large extended warranty underwriter and claims administrator for a number of retailers of household electronic and white goods.The ACCC was concerned that Lumley's extended warranty brochures did not give enough information about the overlap between the warranties and consumer rights under the ACL and therefore had the potential to mislead consumers.

Lumley will now add information to the brochures comparing the features of the plan being sold with the existing remedies available under the ACL.

"CHOICE welcomes this action from the ACCC. Often, extended warranties just don't give consumers a good deal – particularly when the Australian Consumer Law already gives consumers the right to a refund, repair or replacement if the product doesn't work. Businesses should not be able to rely on consumer confusion when trying to sell these unnecessary extra warranties," says Matt Levey, CHOICE Director of Campaigns.

Guidelines on the sale of extended warranties, like those available in New Zealand, could help to avoid mis-selling. New Zealand salespeople need to give consumers a written agreement that clearly explains how each of the protections offered by the extended warranty agreement differs to the consumer law. There is also a mandatory five-day cooling-off period.

Now is a good time to talk about improvements, as an ACL review is scheduled for 2016. CHOICE will participate in this review and keep you updated.