They seem too good to be true - because they are.

Have you heard from friends about a secret investment circle or a club or game where you invest $5000 and get $40,000 back? Or the ads on telegraph poles that offer amazing opportunities? Get rich NOW! Work from home! Ring me and find out how!!!

Be careful, as these could be pyramid schemes and you are risking your money if you invest in them. These are illegal schemes that promise big returns on your money. They rely on the recruitment of new members so the people at higher levels of the pyramid earn money. The problem is, there needs to be an endless supply of members for the scheme to keep operating.

What is a pyramid scheme?

There are different types of pyramid schemes, but they all have one thing in common. The main source of income is the recruitment of members, rather than the sale of products or services. Usually, new members will pay money to join, and they receive payments depending on the number of members they recruit. Sometimes there are products or services that are sold as part of the scheme, but they tend to be worth very little or they're not related to the returns that are promised.

Ponzi schemes are similar to pyramid schemes. They are investment schemes where you invest a sum of money and then get "interest payments" or "dividends" which are designed to make your investment look like it's earning very high rates of interest.

In reality, the payments come out of your own and other investments and rely on new investors coming in so there's enough money to keep paying the earlier investors. Ponzi schemes often last longer than pyramid schemes because participants keep re-investing their money believing that the high returns will continue.

People often hear about these schemes from friends, neighbours, family members or community members. There is usually a sense of urgency and excitement and even if the returns sound like they are too good to be true, people don't like to feel like they are missing out. Unfortunately, when they do collapse, friendships and family relationships can be ruined. Adding to the distress is the possibility of facing a penalty for promoting or even being involved in a pyramid scheme – it's a maximum of $220,000 for an individual and $1.1m for a corporation.

Warning signs to look out for

Multi-level marketing schemes (MLMs) have business models that look a lot like pyramid schemes. Many are promoted through emails, on telegraph poles or on social media. Often the big sell is that you can work from home and earn a lot of money. You might have to sit through a long sales pitch or video before you are told exactly what product or service you'll be selling.

The difference between dodgy MLMs and real MLMs is that in legitimate marketing schemes, your income is related to the sales of products or services. Sometimes it's a bit hard to see the difference. Here's what you can look out for:

If you're concerned have a look on the internet to see if there are any warning signs about that particular business. 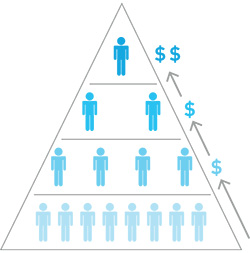 We've heard of an example in northern NSW where women were offered the chance to join a 'gifting circle', paying $5000 to enter the circle as a 'seed'. Eventually, if other levels of seeds were recruited, the seed could become a sapling, then a blossom, then a lotus. The lotus would receive $40,000 and leave the circle, but more circles would have to be created, with each seed aiming to become a lotus.

In December 2012 in Oregon in the US, a group of naturopaths in a gifting circle were required by the Department of Justice to pay back the funds they received, with one also paying a fine of $15,000. This one was apparently called Operation Abundance, but there are other similar schemes with names such as Womens' Gifting Circle and Women's Financial Collective. In August 2013 two Connecticut women were sent to prison for promoting similar schemes over a number of years.

In 2013 the Federal Court of Australia imposed penalties totalling $200,000 against three people involved in a pyramid scheme called TVI Express Oz that had been advertised on websites and on Facebook. Participants paid a membership fee of $330 and received a 'travel certificate' and the opportunity to receive commission payments for recruiting other people into the scheme. The Court found that the travel certificates were almost impossible to redeem and were of little to no value. The only way a person could earn income from their participation in the scheme was from recruiting new members. Therefore it was a pyramid scheme.

There are lots of names to look out for that have been used in pyramid schemes in the past. Airplane is a scheme that was doing the rounds in the 1990s, where the levels were called captain, co-pilots, crew and passengers. There is also one called the Original Dinner Party, where the levels are dessert, main course, side salad and appetisers. Aussie 2-up, 8-Ball and Treasure trove are others. Chain letters requesting money also do the rounds from time to time.

What should you do?

If you think you've been asked to join a pyramid scheme, you should contact the Scamwatch at the ACCC or your state or territory fair trading or consumer affairs agency.