Cutting edge design, but does it push all the buttons? 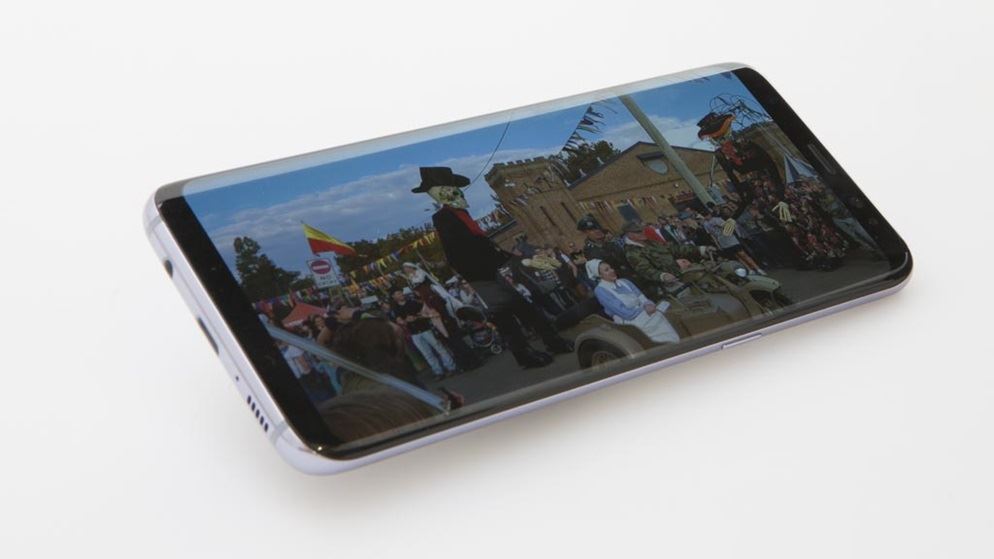 On the edge of perfection

While not creating the same level of hysteria as an Apple iPhone announcement, a new Samsung smartphone launch is nevertheless significant, particularly when the company's 2016 was so memorable for all the wrong reasons.

The latest Samsung Galaxy S8 series is under pressure to not only improve on the popular Galaxy S7 series it replaces but also make us forget the debacle involving exploding batteries on the doomed Samsung Note 7 in the latter half of 2016.

The full review of the Galaxy S8 and 8+ will be out later this month, when we put the models through a thorough test in our labs to see how it fares with the competition. Until then, first impressions on the Galaxy S8 sent to us from Samsung show a device that is stylish and powerful, yet not without flaws.

The S8 kit contains the normal items you would expect to get when forking out over $1000 for a mobile, with a few additional items to help make the smooth transition from micro USB mobiles (the most common interface for Android smartphones up to this point) to USB-C. It seems that USB-C will in time become the default connection for all smartphones, but there is still a huge installed base of micro USB devices and products. It’s nice to see Samsung acknowledge this by providing a micro USB/USB-C adapter in the kit, so your S8 can play nicely with other devices that don’t support the latest connection.

You also get a USB-C adapter to plug in a standard USB flash drive, which allows you to connect a standard USB flash drive to your mobile, which is very handy for playing videos directly from the flash drive without having to transfer the content. If you'd rather store everything on your S8, you probably don't need to worry about space for a while, as the standard internal storage of 64Gb can be expanded to up to 2TB using a microSD card although at the moment, you can only buy cards up to 256GB. A fast charger rounds out the kit and a set of high quality AKG earbuds.

For those who love to know about the specifications, the Samsung Galaxy S8 has an Octacore processor (which means its fast) an IP68 rating which means it's water resistant to a depth of 1.5m in fresh water for up to 30 minutes and is also dustproof. 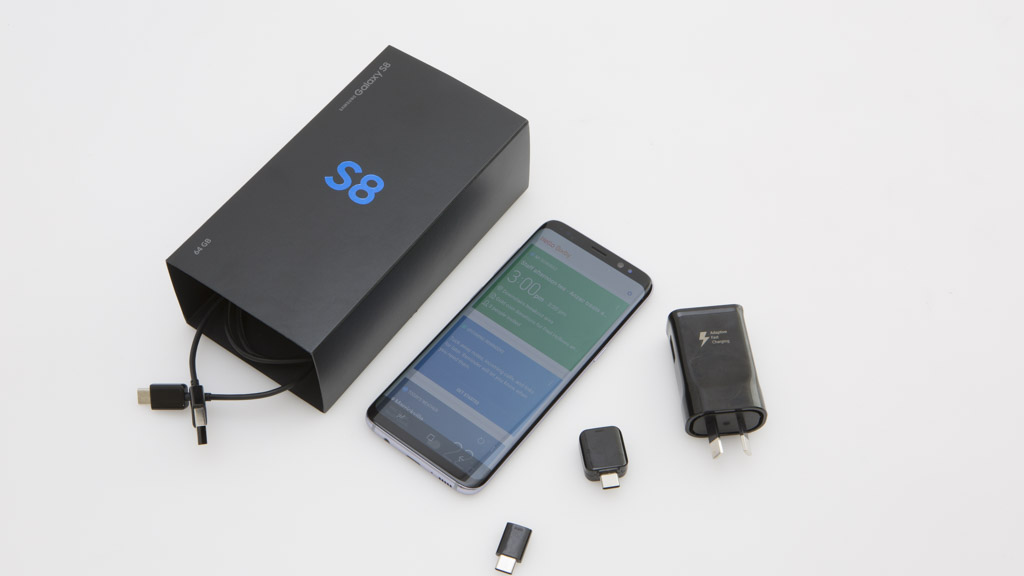 All you need is in the box, including a very fast charger.

The screen is arguably the most important part of a modern smartphone and the display on the S8 is stunning. Watching widescreen high resolution movies on the bright, AMOLED curved infinity screen is a pleasure, as the surprisingly large 5.8-inch display is housed in a body that is only slightly longer than the Galaxy S7. The curved screen on the S8 has been refined to the point where it is no longer a gimmick and actually adds to the overall look and feel. Even if you weren’t a fan of the curved display, you will not be disappointed with the experience when watching video and the transition from the front display to the toughened glass back is almost seamless.

However, the extra length means some users may find it difficult to access all the menus and buttons single-handedly. For example, the placement of the fingerprint sensor to the right of the camera lens is irritating to say the least and if you usually hold a smartphone in your right hand, be prepared for an added period of adjustment as the tendency is to smudge the camera lens as you swipe across to reach the fingerprint sensor. An iris scanner with biometric authentication and facial recognition is also available. Although it seems to take more effort than it's worth to access the mobile, the fingerprint sensor seems to be the most common and easiest way to keep the phone safe without having to jump through too many log in processes.

Mobile controls include a power button on one side and a volume rocker on the other. Below the volume button is a dedicated Bixby button. The removal of the physical home button creates a smooth seamless design and will no doubt become the norm for all smartphones, with the three Android buttons (Open apps/Home/Back) revealing themselves as virtual buttons once you touch the screen. 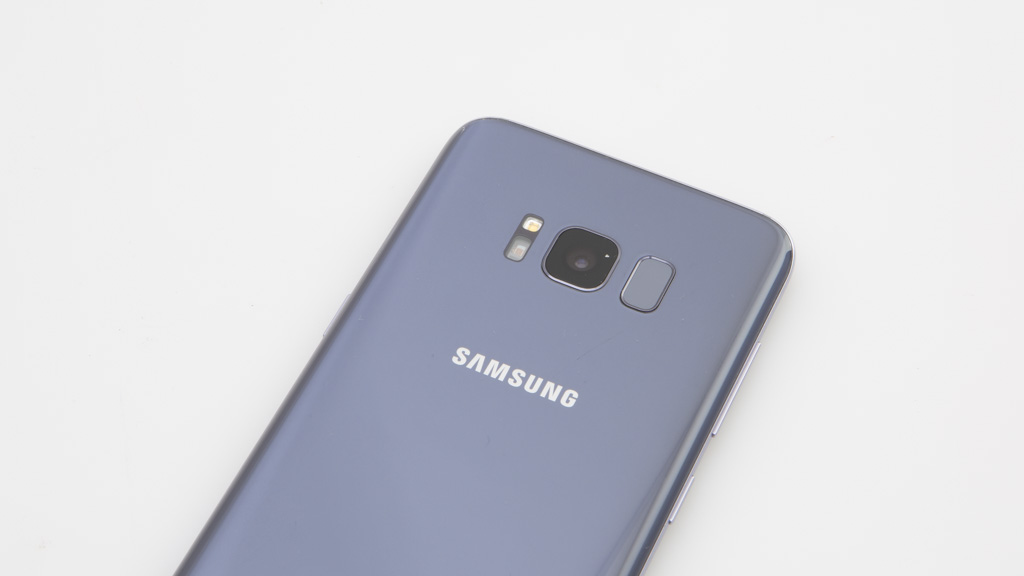 Fingerprint sensor placement next to the camera lens looks like an afterthought.

Some people like the voice assistant features on offer with Siri (on their iPhone) or Google's Assistant (Android) but the ability to turn the feature off means if you don’t like it, you don’t have to deal with it.

Bixby, on the other hand, is Samsung’s version of Siri/Google Assistant as well as some other search, calendar and notification features that's supposed to learn how you live and act accordingly. However Bixby is inextricably linked to the Samsung experience and for people who don't want to be bombarded with AI info, this could be an issue. The Bixby button falls comfortably under the thumb when holding in the left hand and would be very useful if you did actually want to use Bixby. If you don’t want to use the feature the button would have been an ideal shortcut that could be associated with an app that you may want to use, such as camera, office doc, mail. Unfortunately, Samsung doesn't allow this flexibility and it's easy to press the Bixby button unintentionally. If you don't create a Samsung account, the experience is even more irritating than just closing Bixby every time you accidentally press the button. At least the ability to change the Bixby button to Google Assistant might have been more useful. 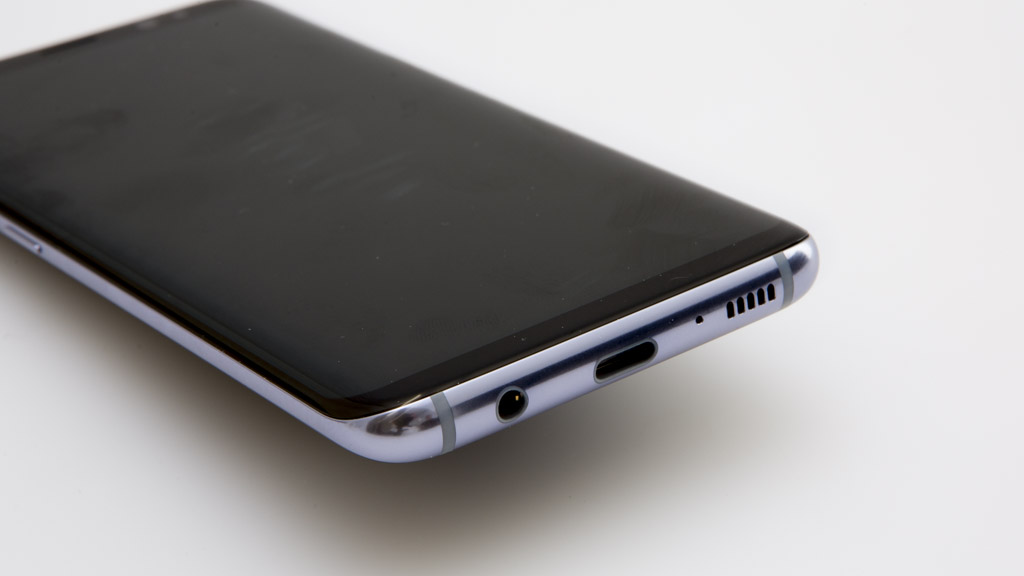 USB-C is the future, get used to it. Thankfully, the headphone jack remains.

The 'always on' display is a simply elegant way to see notifications without having to wake the phone, as it not only shows the time, but also battery life, email, text and calendar notifications. Camera performance is also very good, with fast autofocus, even when panning across a scene and the ability to take multiple shots and HDR proving to be very useful when capturing images in challenging lighting situations. The on-screen controls are easy to use and nice touches, such as swiping to swap from main to selfie camera mode, keeps missed picture opportunities to a minimum. Some other in-camera features, such as stickers (putting cat ears on your photo) and a good range of filters, should keep most people happy capturing casual snapshots. However, the dual-lens camera that has proved to be a very useful feature for capturing more of the scene in confined spaces such as clubs or at family gatherings isn't available on the Galaxy S8. 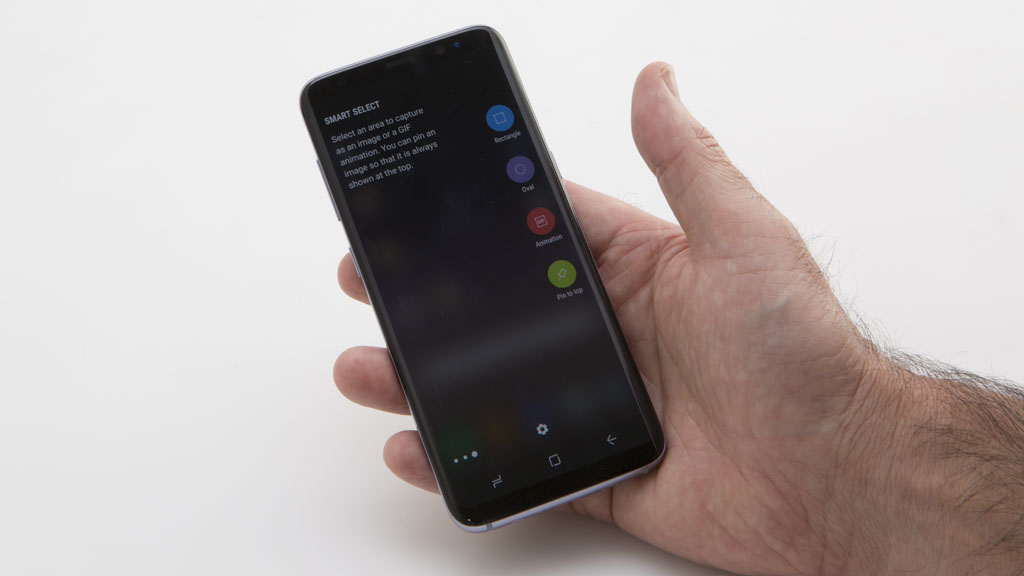 Samsung continues to add some of its look and feel to the standard Android menus and general look and feel with Samsung apps and an Apps Edge drawer, which slides out when you tap the area on the edge of the screen to reveal a collection of apps you and with a swipe from the right edge of the display. Although some smartphone owners wanting the clean Android experience may have issues with the Samsung’s take on the Android operating system, the intrusion really is minimal. General performance is fast and sure, with apps starting quickly and general tasks carried out as soon as selected.

Although the case is comprised of a combination of toughened glass for the display and back, the device doesn't feel like it will slip of your hand when holding. However, a case would be recommended as it must be emphasised that this is not a cheap phone and a drop to the kerb won't be covered by Samsung if your only defence is 'but it looks too cool to put in a case!'