High cost of living with a disability

Mobility aids and other assistive technology is critical to the lives of Australians with a disability – but are we paying more for it than people overseas? 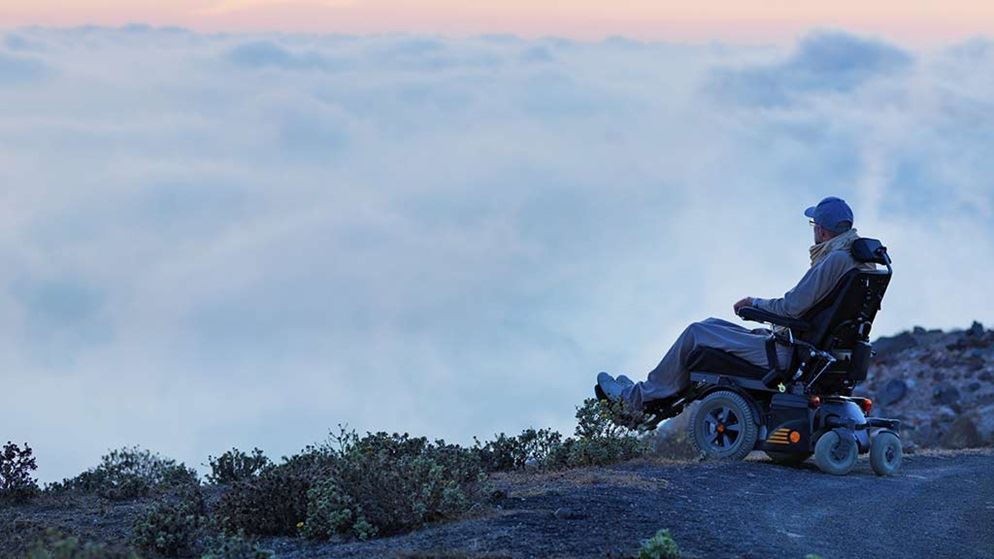 Some Australians with disabilities believe they're paying more than consumers overseas for mobility aids such as wheelchairs, mobility scooters and other assistive technology.

On the other hand, there are some people in the sector who argue that local prices for AT are fair, and that complex equipment requires intensive customisation and servicing on the ground.

What most do agree on, though, is that the current rollout of the National Disability Insurance Scheme (NDIS) will change the landscape when it comes to how Australians with a disability decide to buy the products and services that are best for them.

In our Mobile phones for seniors reviews, we compare specially-designed phones from with popular smartphones to find what's best for elderly and impaired users.

The state of the AT market in Australia

According to the Australian Bureau of Statistics, in 2015 there were 4.3 million Australians with a disability (that's nearly one in five people).

Of the 15.4 million Australians living in households who were of working age (15 to 64 years), there were over two million people with a disability, which is one in seven people, while just over half (50.7%) of Australians aged 65 and over reported living with disability.

For people living with a disability, tailored equipment such as wheelchairs and mobility scooters, services and technology are critical to their day-to-day living and being able to work and participate in the community.

Currently the state and Commonwealth governments are heavily involved in buying and distributing medical aids and devices. However, a fair amount of purchases are made directly by consumers without financial support.

The National Disability Insurance Scheme (NDIS), which is currently being rolled out, will provide additional support to individuals with disability and will affect both consumers and suppliers (government and non-government) of medical aids and equipment.

In the meantime, some consumers of AT have expressed concern that the retail prices of certain types of medical aids and equipment are substantially higher in Australia than on overseas internet sites, with some local consumers reporting that they can save money on certain products even after paying for shipping.

Is it cheaper to buy AT from overseas?

Australian consumers often pay more for products than their overseas counterparts. Price discrimination can see us paying significantly higher prices, usually without much justification, for items like software, movies, music and even cosmetics. The margins are so good that the Australian market has been referred to as "Treasure Island".

But while products like media and make-up could be considered 'nice to haves', assistive technology, or AT, is essential to people's quality of living.

From a quick scan online it may appear that Australians are paying more than their overseas counterparts, but with AT, it's very difficult to compare like with like. In 2014 the Queensland Competition Authority (QCA) conducted a review to find out if there were clear price disparities for disability aids and equipment sold in Australia versus overseas.

The review found that consumers in the USA and UK generally pay less at retail than Australians do for many aids and equipment, particularly with simple products that require little or no after-purchase adjustment or servicing such as incontinence products or shower chairs. And some of the more complex products also cost substantially less overseas. The report cited the example of a manual wheelchair advertised on Australian websites for $2236 that could be bought from a US site for $1401.

But in the case of an item such as a motorised wheelchair, depending on the disabilities of the user, it's likely extensive adjustments and modifications would be needed before the chair can be used. After modification, adjustments and future repairs made under warranty, the QCA review found that the gap between most prices reduced dramatically or completely disappeared.

Chris Sparks is the executive officer of Assistive Technology Suppliers Australasia (ATSA), the leading industry body representing assistive technology suppliers in Australasia. He says he can pinpoint exactly when the misunderstandings about costs in the local market occurred.

When the Australian dollar hit parity with the US a few years ago and there was a rise in access to online US-based retailers, many people saw they could buy equipment from there for less, says Sparks. He agrees that with simpler equipment such as shower chairs or pressure cushions there may be some savings to be made if customers team up and share the cost of international shipping. But when it comes to complex equipment, Sparks says there's more to the issue than simply finding the best price online.

"One parent was so angry because the wheelchair they had bought their child in Australia had cost $11,000 and they said they had looked online and that they could have had the same chair for just $3000 from the States, says Sparks. I found the original supplier in the USA, and then investigated the cost of freight for that particular model and it was over $1000. And that was just to get the very base level chair, without any customisation – it was a totally basic model. By the time I'd been thoroughly though the quote I honestly could not see where a penny had been gouged out for the Australian price."

In for the long haul

Another issue to consider, says Sparks, is the long-term relationship that owners of complex equipment – such as motorised or stand-up wheelchairs – will have with their retailer or supplier. "Repairs, batteries, motors, even gearboxes … as an owner you're prevailing on your provider to come on out and get you going again," Sparks says. For the very complex equipment the hands-on support goes through the roof. "As a supplier you can easily churn though 30 to 60 hours of service time with a single customer. You need highly skilled staff and the actual level of service is extreme."

Carolyn Campbell-McLean is a disability training and communications consultant and director of Muscular Dystrophy NSW, she also uses a motorised wheelchair. She says that when it comes to assistive technology the user and supplier are "beholden" to each other, thanks to the need for maintenance and customisation. "I only get a new chair every nine years. It's a long time to have a relationship with suppliers. You do want them to fix your chair as soon as they can when there are problems. My wheelchair is pretty good, but it's not a luxury item – I am in it all day, every day. But in that sense they have the balance of power, you don't have any other choices."

Pricewise, Campbell-McLean says customised equipment is expensive. "I know many of these companies spend a lot of money developing things, and that costs." Despite this, she says the lack of choice in the market can be frustrating. She points out that a wheelchair could cost $27,000, the same as a car, simply because of the difference in the size and scale of the two markets.

What are your postage options when US retailers won't ship your purchases to Australia? Find out in ShopMate and US freight-forwarding services.

Life on just about every level is costly if you have a disability, so there will always be instances when it's tempting to source products directly from overseas to try to save money. Serena Ovens, Executive Officer of the Physical Disability Council of NSW (PDCN) says that she's known Australian Paralympians who've sourced specialist equipment overseas at far lower costs. However, she does have this warning for local consumers tempted to buy from overseas: "It depends on the equipment but in some cases it may not be set to Australian standards. With some devices there may [even] be different speed limits which can make the equipment illegal."

The National Disability Insurance Agency (NDIA) is the independent statutory agency charged with implementing the NDIS. It has this advice for online shoppers: Consumers should be ensuring that suppliers are offering important protections they may require such as Australian-enforceable warranties, maintenance, spare parts and repairs in a timely way and advice on matching the right AT for their specific needs (including where they will use the equipment.)

Serena Ovens says sourcing AT can be incredibly complex in Australia. "People need equipment but it's not always clear where to go to purchase it. [Then there's] working out funding, and then when you do there are long waiting periods for some people."

Carolyn Campbell-McLean agrees that the system can be difficult to navigate. "I'm a well-resourced person and I know how the system works, but there are plenty of people who aren't well set up; they might be struggling with day-to-day life, or they may not have good English – for them it's very difficult." The Queensland Competition Authority report also highlighted what it called the "asymmetry of information" where the consumer, the person with a disability or their carer, must rely on their supplier or occupational therapist for help with deciding what to buy without necessarily being aware of better price options or even having the ability to search for a better price.

Campbell-McLean says that ideally the NDIS will mean that consumers with a disability will be able to shop around, but she believes being able to review and compare products is difficult. "Certainly there is a market for something like CHOICE but for AT, where we can make our own decisions about what we buy."

Will the rollout of the NDIS change the market?

Campbell-McLean is optimistic that the rollout of the NDIS will change the landscape for the better. "The NDIS will likely bring a change to the market and it will be more competitive. Not only will you know what you need and how to get it, but also what suppliers have and what prices they are charging. It's quite transparent and there is an approval process."

The NDIA acknowledges that there's currently "insufficient readily-available information for people with disability to easily compare prices and value for money for some areas of AT supply". A spokesperson says that the NDIA is working with participants and the sector to enhance both the availability of information and participants' skills in choosing between competing AT options, and that it will also work with appropriate regulatory authorities including the ACCC to counter practices of price inflation.

What is the NDIS?

The National Disability Insurance Scheme (NDIS) came about after a 2010 public inquiry by the Productivity Commission into a long-term disability care and support scheme. The NDIS legislation was passed in March 2013 and the NDIS Act 2013 created, along with the scheme and the National Disability Insurance Agency to implement the scheme. The NDIS aims to provide the 460,000 Australians under the age of 65 with a permanent and significant disability and their family and carers with the reasonable and necessary supports they need to live an ordinary life. The main point of difference over the previous system is that the scheme will provide a personalised funding package (allocation) for people who are eligible, which will give the recipients greater control and choice over how the funding is spent.

The NDIA is responsible for working out who should get support from the NDIS and how much. The scheme is expected to be fully available by 2019.