The high cost of university textbooks 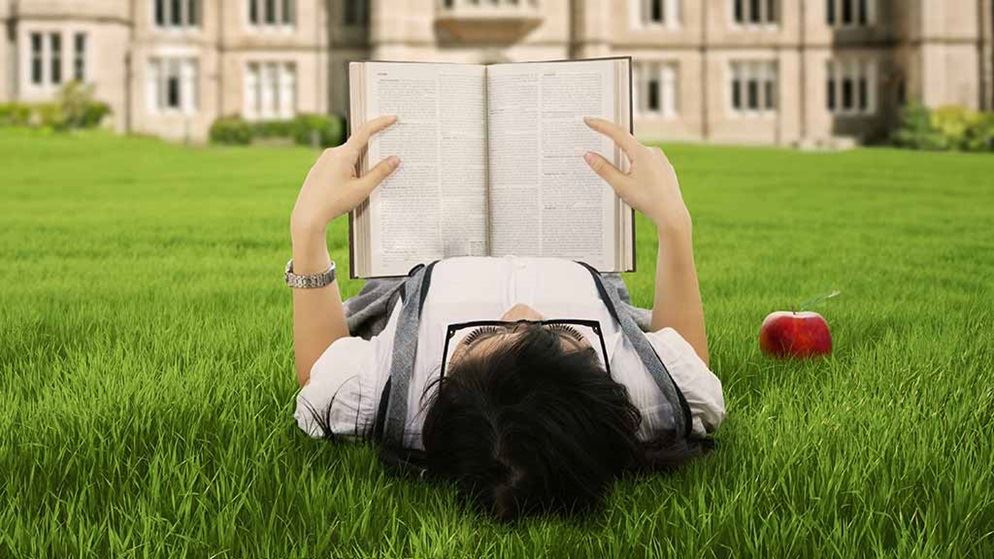 The cost of university textbooks can cause some students to reconsider their career paths – at least that's what the National Union of Students (NUS) says. But the publishing industry begs to differ.

NUS national welfare officer Robby Magyar says he's experienced the issue firsthand. He was initially going to study psychology, but the $200 price tag for one text – typical for the program – changed his mind. New editions came out every year, Magyar says, making it impossible to buy a used book.

And that's just one case. Magyar tells the story of a nursing student at Flinders University faced with a $2000 textbook bill, one of many such anecdotes he heard on his national tour of uni campuses during orientation week earlier this year.

Some students Magyar talked to said they had started a degree, found that it's not for them, and then been stuck with a stack of costly textbooks. It's mostly an issue for science, maths, medicine and law students, whereas arts students generally aren't required to purchase such specialised texts.

Need an affordable computer for uni? See our laptop and desktop reviews.

The issue of textbook affordability has been gathering steam for a while. In a 2012 Universities Australia survey on student finances, textbooks were the second biggest expense outside of tuition, averaging about $600 a year for full-time undergraduates (transportation was the biggest cost).

At last count, there were about 1.3 million tertiary students in Australia, 25% of whom are international. Yes, textbooks are big business, generating about $400 million a year for Australian publishers.

Lifting restrictions on parallel imports is the answer, Magyar says. Another option is to move textbooks online, a growing trend in the US that is currently being trialled by ANU.

We asked Universities Australia whether textbook costs are placing an undue burden on students and if parallel import restrictions should be lifted but the organisation declined to comment.

Regardless of how the parallel import issue affects University textbooks, CHOICE has long been an advocate of the practice, making recommendations to this effect in the 2012 House of Representatives Inquiry into IT Pricing, the 2014 Harper Review of Competition Law and Policy, the 2015 Productivity Commission Inquiry into Intellectual Property Arrangements, and through many other consultations and reviews.

In its 2014 submission to the federal government's review of competition policy, the Australian Publishers Association (APA) recommended that restrictions on parallel importing be removed unless they're in the public interest. But the submission goes on to argue against parallel imports on many fronts and, in effect, says the restrictions in place at the moment are in the public interest because they encourage competition between authors and publishers in a way that benefits consumers.

The federal government's competition review recommended in November 2015 that parallel import restrictions on books be removed, in the hopes that books will become more affordable for consumers. The Productivity Commission made a similar recommendation in 2009 and more recently, in a draft report released in April this year, it called for an end to restrictions on parallel import of books by the end of 2017.

The trouble, according to Maygar, is that publishers want to protect their income streams. "It's a money-making exercise where students are taken for a bit of a ride."

Another interested party is the Australian Manufacturing Workers' Union, says Maygar, which represents companies that design, print and package books. Meetings with the union to talk about textbook costs have not gone well, Maygar says. "It's a polarising issue, and we're not as well resourced or equipped as people on the other side."

The APA maintains the NUS has its facts wrong, and takes issue with the long-running recommendation by the Productivity Commissions to lift parallel import restrictions for books.

Following the Commission's April 2016 call for the adoption of a US-style 'fair use' model (which calls for removing parallel import restrictions and allowing largely unrestricted use of copyrighted material), APA CEO Michael Gordon-Smith didn't mince words.

"Instead of wise or measured recommendations, the Commission's draft report delivers a radical manifesto completely at odds with the government's pursuit of innovation and a knowledge economy. The report uses one-sided analysis, old data, and simplistic models to support an agenda for sabotage."

Such a model would deal a "huge blow" to Australian education and lead to fewer Australian books available locally, the APA contends. It also points out that 'fair use' is an ambiguous concept that has given rise to numerous lawsuits in the US.

The APA told us it tried to contact NUS repeatedly to discuss the issue but didn't receive a reply, and the organisation refutes the charge that textbooks are disproportionately adding to the costs of higher education in Australia.

The APA provided CHOICE with an international comparative breakdown of textbook costs for 106 books available in Australia, the UK and the US. According to the APA's analysis, price differentials were negligible, and in many cases books were cheaper in Australia.

On the face of it, textbook costs in Australia don't seem to be out of whack. A 2005 study from the Center for Economic and Policy Research in the US, for instance, says textbooks and supplies cost an average of $US898 for a full-time first year student.

We shopped at various online sites in Australia, the UK and the US for one widely used textbook – 'Discrete Mathematics with Applications' (4th edition) by Susanna E Epp – and found that prices for a new, hardback edition ranged from a low of $167 in Australia to a high of of $426 in the UK (where a $175 deal was also available). Prices in the US were consistently and significantly higher on average than UK or local prices.

"I don't think the public realises how much material and expense goes into a textbook – they don't see that," Petrulis says. "There are generally two or three years of academic work behind each text along with diagrams and other important visual elements sourced from third parties. These people don't give it to us for free."

"Each text is built from the ground up, we have small print runs, and the window for sales is two to three years. We are not an industry that is gouging students."

Petrulis argues that parallel importing wouldn't make a difference, since Australian costs are already on par with other countries that use the same textbooks.

If there were to be a uniform price throughout the world, Petrulis says, it would likely align with the US price on Amazon or a similar US mega-retailer.

"If the National Union of Students wants to have a discussion about the price of education, that's fine. That would include a lot of things, but they're just focusing on one small aspect called textbooks."

Where can you find cheaper textbooks?

Textbooks may or may not be fairly priced depending on who you believe, but they are expensive. There are a few services that rent textbooks, but the caveat is that you generally can't write notes in them and must keep them in good condition. Minimal highlighting is generally allowed.

Some universities also have second-hand book shops on campus. It's worth checking out, though you'll need to make sure you're buying the right edition.