Mineral make-up: not so natural

Mineral make-up isn't quite as natural as cosmetics marketers make out. 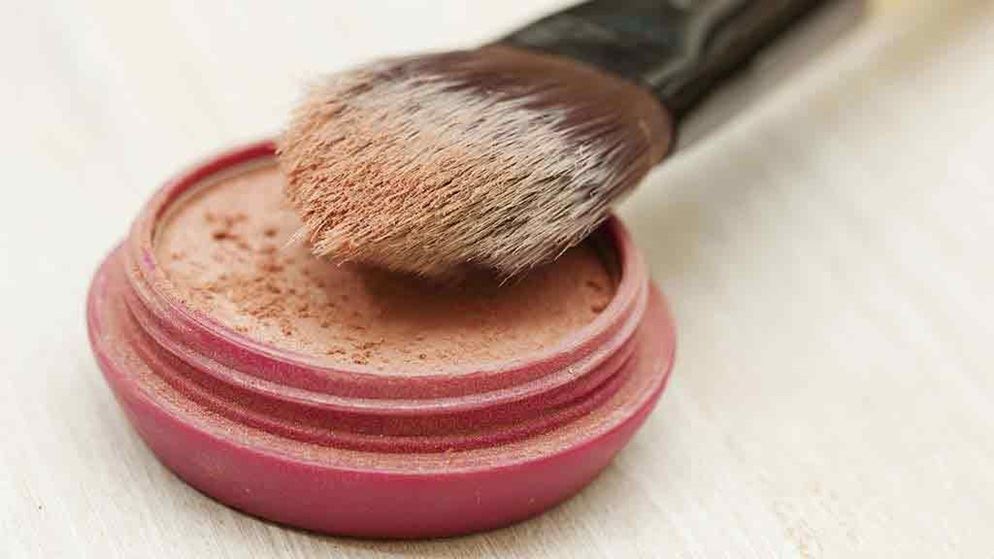 For anyone who wears foundation, the benefits of mineral make-up sound like a dream. Far from clogging your pores or being bad for your complexion, it claims to be so gentle you can sleep in it. Some brands even claim using it will improve your skin.

Despite having been around since the 1970s, mineral make-up has seen a recent surge in popularity. Capitalising on what seems to be the public's passion for all things "natural", many major cosmetic brands have launched a line of mineral foundations over recent years and are selling them from department stores to supermarkets.

How is mineral foundation different?

Mineral foundation is marketed as a more natural alternative to other foundations, such as liquids and pressed powders. The biggest difference is that it usually contains finely crushed, naturally occurring minerals, and most come in loose powder form to be applied using a special brush.

It's a radical departure from the usual quick application of liquid, sticks or pressed powder bases with fingertips or a sponge. Although a little more complicated and messy, the claims you'll be improving your skin and appearance make the extra effort seem worth it – who wouldn't want to use make-up that's good for your skin?

But is it really natural?

Even though it's claimed mineral foundation has many good qualities, including being great for improving acne, moisturising skin and not clogging pores, dermatologist Philip Artemi says none of these claims are true. "Mineral make-up isn't anything but an alternative kind of make-up, nothing more," he says, arguing it doesn't have any therapeutic effect. As a cosmetic, mineral foundation can't actually make any therapeutic claims.

As for being more natural than other kinds of make-up, once again mineral foundation fails to live up to its claims. Most of the mineral ingredients naturally contain traces of toxic impurities and require processing to remove them. As ingredients undergo chemical processes and purification to render them safe for cosmetic use, it's quite a stretch to define them as "natural", says Artemi.

Some will contain bismuth oxychloride and talc as well.

It's a personal choice

For consumers who wish to avoid all these added extras, cosmetic chemist and pharmacist Tina Aspres recommends checking the ingredients on the package. Her first rule of thumb is to look for a product with as few ingredients as possible. The products we found available had as little as five ingredients and up to 30.

Aspres also suggests looking for a product that's fragrance-free, doesn't contain parabens or other preservatives, and doesn't include bismuth oxychloride. After that, she says it's a case of trial and error to see what looks best on your complexion. "Some people with oily skin find that the mineral powders darken in patches on their skin, while other people find it quite drying," she says. "Some people love the light coverage it gives and the way it feels. It all comes down to personal preference."

If you have problem skin

While they can't work the magic on your skin that the marketers would have us believe, some mineral foundations may appeal to people with skin conditions such as rosacea, acne and eczema. Artemi says that simpler mineral make-ups – those that contain only a handful of ingredients, as well as being fragrance- and preservative-free – are likely to be less irritating.

Bismuth oxychloride is a very common and popular ingredient in cosmetics; we found it in 10 of the 14 products that we compared. It's used to add bulk as well as giving a visible sheen that camouflages lines, wrinkles and minor discolorations. It also gives the product a silky, luxurious feel. On the downside, it's a totally synthetic ingredient, a by-product of lead, tin and copper refining, which is further refined and combined with water and chloride.

Despite the marketing hype, mineral make-up doesn't improve your skin, nor can it be considered a "natural" alternative to other types of foundations – it's simply an alternative. If you have sensitive skin, look for a mineral make-up that doesn't contain fragrance, preservatives, or bismuth oxychloride.