The dangers of spray-on cosmetics

Deodorants, sunscreen, fake tan and make-up may be safe on your skin, but are they safe in your lungs? 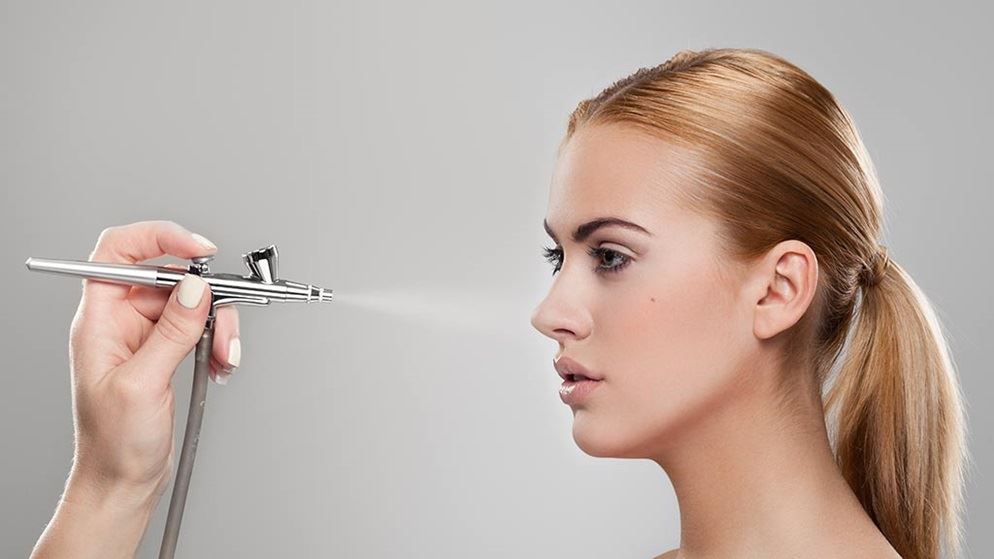 Aerosol deodorants, body sprays and hairspray have been around for decades, while spray-on sunscreens and fake tan are becoming increasingly popular – and now aerosol and airbrush make-up is available. Yet some of the ingredients in these products, while safe to your skin, are suspected of being harmful when swallowed or inhaled.

Most of the time the effects of spray cosmetics are short-lived and can include symptoms such as dizziness, breathlessness, headaches and tiredness. People with lung diseases such as chronic obstructive pulmonary disease or asthma are particularly susceptible, and may have symptoms worsen. But long-term effects are less well-known.

(Spray gun, misting or aerosol can)

The active skin colouring ingredient in fake tan is called dihydroxyacetone. While it's safe when applied to your skin, there are concerns about its safety when inhaled, eaten or absorbed through the skin via mucus membranes (for example, your lips or eye area). It has been approved for topical application on the skin by the Therapeutic Goods Administration (TGA), but if it enters the blood stream via inhalation or absorption, it's no longer topical. Despite this, it's widely available in aerosol and airbrush sprays or booth misting, and it's often applied without breathing, lip or eye protection.

The Food and Drug Administration (FDA) in the US, which has the same position as the TGA, recommends people use protection over the eyes, nose and lips when getting a professional spray tan to prevent contact with the tanning liquid: there are small eye shields and nostril filters which don't interfere with the look of the tan, and the lips can be covered with lip balm or petroleum jelly.

(Airbrush or aerosol can)

Airbrush-applied foundation is touted as the way to a smooth, flawless make-up finish. While most often found in TV and film studios, it's become increasingly popular for weddings and other photo shoots, with home airbrush kits also available. And for those who want the fine finish without all the fuss of airbrush equipment, there are canned aerosol products available.

Some of these products are silicone-based, some are water-based, and both have their advantages in terms of appearance and longevity. However, some that claim to be silicone-free suggest it's a positive feature because silicone's bad for you – bad for your skin, but also bad for your lungs.

The 'silicones' in question are siloxanes that fall into two broad classes when used in cosmetics: dimethicones and cyclomethicones. Dimethicones have been shown to be safe, even when inhaled. Some cyclomethicones have caused concern when inhaled. Cyclotetrasiloxane is considered toxic to reproduction in the EU, where a review of scientific studies found inhaled cyclotetrasiloxane impaired fertility in rats. However, more studies are needed to determine its effects on people.

Another potentially harmful ingredient in the aerosol products we looked at is titanium dioxide, which is considered safe on the skin, but its health effects are uncertain when it's inhaled – and remember, you're spraying it straight at your face.

Mostly known for its role as a sunscreen, titanium dioxide is used in cosmetics such as make-up foundation and lipstick to provide a white-coloured pigment or opacity.  The International Agency for Research on Cancer has rated it as "possibly carcinogenic to humans" when inhaled. This is based on animal studies where high concentrations were inhaled. There's not enough information on humans to draw firm conclusions.

Population studies have linked the use of hairspray by pregnant women to hypospadias (a malformation of the penile opening) in baby boys. The most likely culprit is phthalates, chemicals used to give hairspray its hold and also used in fragrance. Phthalates are known endocrine disruptors – that is, they have hormonal affects in animals. Hairdressers are most likely to be affected, though one small study reported a non-significant trend in home users. However, occasional inhalation of hairspray is generally not associated with negative health effects.

In other research, hairdressers were found to have reduced lung function compared with people who didn't work with the products looked at, which included bleaching powders as well as hairsprays.

So-called hairspray poisoning can also cause short-term problems, due to alcohols and solvents. Symptoms like blurred vision, breathing difficulty and burning pain in the throat are usually short-lived, though coma is also possible – especially if deliberately abused.

Deaths due to excessive use of spray deodorant have been reported in teenagers. Doctors blamed the propellant ingredients butane and propane, which affected the heart rhythm, causing cardiac arrest. While instructions may say to use them in a well-ventilated space, they're often used in a bathroom with the door closed.

The dangers of spray sunscreen hit the headlines when people suffered serious burns when it caught fire after it was applied. The sunscreens contain flammable propellants which could ignite if used near an open flame. But in these cases the sunscreen contained alcohol which was still wet on the skin, and there were incidents where it was ignited by a barbecue flame, citronella candle or cigarette.

There are concerns about potential effects of inhaled zinc oxide and titanium dioxide, which are often found in sunscreens, often in nanoparticle form. However, there are no aerosol sunscreens with these ingredients on sale in Australia.

As for other sunscreen ingredients, the answers are less clear. Some have been found to have endocrine disrupting effects – that is, they interfere with animal hormonal systems. Because these products don't readily penetrate the skin, they're not considered a risk to humans. However, when inhaled it might be a different story, and there's little research to demonstrate safety or danger.

Should we be concerned about using these products?

Inhaled aerosols and particulate ingredients present different health risks depending on their size. The smaller they are, the deeper they can penetrate into our lungs. Other factors such as particle type, airborne concentration and exposure frequency and duration are also important factors.

People working with these sorts of products, typically in hair and beauty salons, have the greatest potential for repeated exposure. However, consumers may also be at risk of exposure due to occasional inhalation either at beauty salons or at home.

"While the number of aerosolised hair and skincare products is increasing, there is still a knowledge gap around health and safety of these products, and further research is needed to allow firm and evidence-based conclusions," says toxicologist Dr Shahnaz Bakand, a health and safety expert from University of Wollongong.

"Collaborations between academics and industry partners are required to conduct toxicological and epidemiological investigations in this demanding area."

Meanwhile, inhalation should be considered as a significant route of exposure to aerosolised hair and skincare products, affecting not only the lungs but allowing quick access of inhaled ingredients into the blood stream.

"Proper ventilation is vital to minimise the risk of inhalation exposure to airborne materials," says Dr Bakand. "Other control measures, such as using safer products, sourcing safety information on product labels or safety data sheets, relevant training on safe work procedures and using personal protective equipment should be also considered to eliminate such hazards, or minimise potential risks and to ensure health and safety."

How to use spray-on cosmetics and skincare safely

While some spray products appear to be riskier than others, there are also many unknowns. The good news is that it doesn't take much to reduce any potential risks.