Will this pocket-sized personal hygiene product dethrone conventional air fresheners, or are its claims a little on the nose? 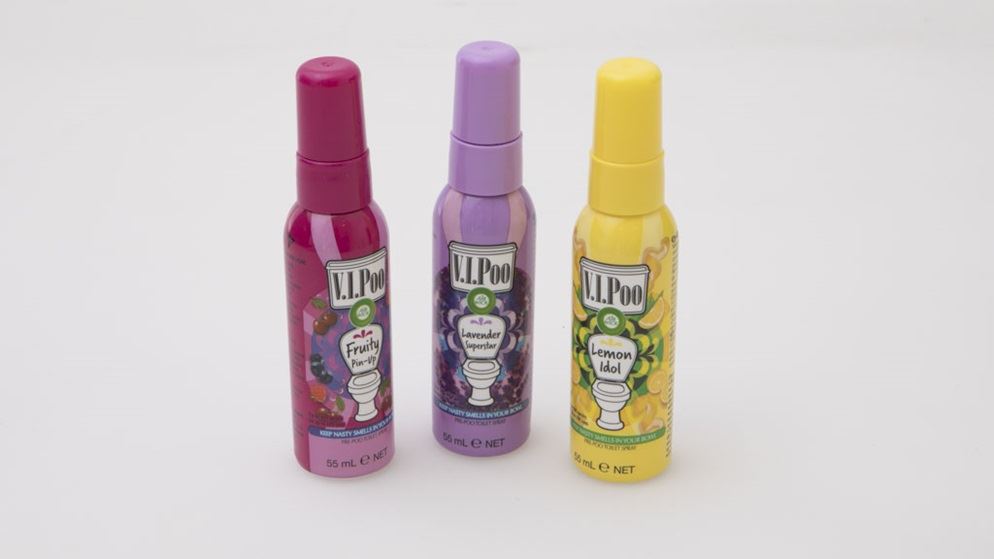 The smell of success?

What does V.I.Poo do?

The secret to pooing in public without the pungent proof could come in a purse or pocket-sized pump pack of V.I.Poo. Unlike aerosol air fresheners which fill the air with masking agents that fool no-one and often smell worse than the original offence, this is a pre-poo prophylaxis. Three to five squirts of V.I.Poo directly into the toilet before taking your seat apparently creates a protective layer on the surface of the toilet water, with the aim of trapping the olfactory evidence of last night's poor dietary choices in the depths below.

Its convenient size means you never need to be caught out when driving Mrs Brown to the coast, and it comes in a range of celebrity-themed scents (Lemon Idol, Fruity Pin-up, Lavender Superstar and Rosy Starlet) so you can customise your bathroom experience.

If it works, this is great news, both for defecation decliners who can now go 10 rounds in a heavyweight bathroom bout without taking the title of Gaseous Clay, and the seasoned cubicle club, who can continue to crazy pave the porcelain while enjoying a more pleasant environment.

How we tested it

We asked CHOICE staffers to keep a bottle handy when a grizzly came scratching at the back door then asked them to evaluate the air quality before and after. We also used feedback from early adopters who seem only too keen to leave evidence of their use online now they're not leaving it in the bathroom. We checked to see if V.I.Poo left a residue behind after use as this could impact your toilet cleaning routine, and we also approached Sydney Water about V.I.Poo's impact on our waste water systems.

Is there a downside to using V.I.Poo?

We've been successfully toileting for years without manufacturer Reckitt Benckiser's help, so you don't actually need V.I.Poo at all. However, it can make the process a bit more pleasant for you and those who follow. So for $10 it's a small price to pay for a bit of consideration.

With V.I.Poo it's important to plan ahead. Forget to pre-spray and you'll still find yourself wallowing in the wafty winds of shame. Likewise, V.I.Poo claims to target solids not gasses, so passing wind still presents a pungent problem.

Use V.I.Poo and you're adding strangely named chemicals to our waste water network. And while its ingredients are commonly found in many hygiene and household products and (in V.I.Poo quantities at least) are unlikely to harm the environment, it's good practice to keep chemical additions to our sewer system to a minimum.

Does it actually work?

It's time to clear the air. Yes, V.I.Poo works, but not for reasons you might think. According to Sydney Water's sanitation experts, a waterborne barrier won't provide protection from malodorous maladies because the offending odours are actually released during the process itself, not from your demons of the deep (which for the most part won't start giving off odours until long after they're safely dispatched beyond the S-bend). So foul smells don't even come in contact with the water, let alone get trapped beneath it.

So why do users swear by it? We suspect it's for two reasons – firstly, the placebo effect is powerful, and believing in something hard enough tends to make it true (for the believer at least). And secondly, because just like conventional air fresheners, it masks foul smells with a scent of its own. So the air in your bathroom will seem fresher, even if it's not necessarily the case.

But panacea or placebo, for the self-conscious among us V.I.Poo may provide a real benefit: alleviating the stress and anxiety of being too afraid to go when you really need to – and to us that smells like freedom.