How to buy cruelty-free cosmetics

Our guide to animal testing, certification and how you can make a difference.

Even if wearing lipstick isn't your thing, you probably use a number of toiletry and personal care products — from soap, shampoo and toothpaste, to deodorant, moisturiser or shaving cream. All of these are generally safe if used as intended.

To establish their safety, though, some of these products may have been tested on animals. And for a lot of people, smelling nice just isn't worth that price. So how can consumers work out which products are tested on animals? And what are the alternatives to animal testing?

What the law says about animal testing

Australia doesn't require cosmetics to be tested on animals, as long as suppliers can provide evidence for their ingredients' safety. In fact, with a growing global trend towards the banning of cosmetics that are tested on animals (the European Union, India and Israel have led the charge), there are moves afoot for Australia to follow suit.

There are many ways to establish a cosmetic product's safety without the use of live animals, such as:

What to look for when shopping for cruelty-free cosmetics

There are several independent third parties that certify products as having not been tested on animals, including Choose Cruelty Free, the Leaping Bunny and PETA . These organisations:

However, it's important to note that in some cases even companies that abstain from the Chinese market may be penalised by the certifiers on the basis of their parent company's stance on animal testing.

Not all logos are created equal; just because they've put a bunny on it, doesn't make it cruelty-free. Look for an official logo from one of the third-party certifiers. 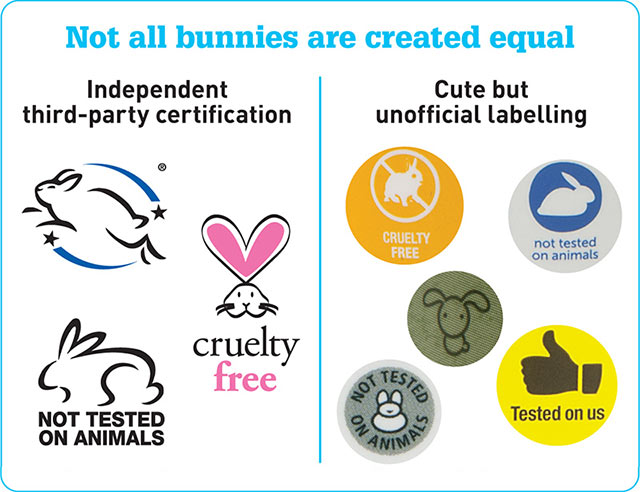 Labelling claims on cosmetics must comply with various state and federal laws, but the use of terms such as "not tested on animals" or "against animal testing" on cosmetics packaging isn't specifically regulated. We've found that manufacturers take liberties with the interpretation of such claims, and as most of the animal testing occurs overseas or during the supply chain, rather than while making the finished product, they don't fall foul of the Australian Competition and Consumer Commission.

Currently, all cosmetic products sold in mainland China must be registered with the authorities. To become registered, companies are required to submit a dossier to a government authority along with product samples for the authority to test.

The authorities then do a number of tests, including for pH [levels] and viscosity. They also conduct skin and eye irritation tests. At the moment, these tests are done on animals. This means that samples of products that are currently sold in China must, by law, be provided for animal testing.

China recently announced that it's phasing out its requirement that new, domestically-manufactured, "ordinary" cosmetics and personal care products be tested on animals this year. Companies will instead be allowed to conduct their own product risk assessment using ingredient safety data, which can be gained from non-animal testing methods, provided the methods are deemed scientifically valid by the EU.

However, it's not all good news. Foreign-manufactured cosmetics (unless they're packaged in bulk in China) will still have to be animal tested, as will "special-use cosmetics" such as hair dyes, antiperspirant deodorants, sunscreens and skin-whitening products.

And the larger issue is that regardless of the pre-market testing requirements, Chinese authorities still carry out post-market testing of all products on Chinese shelves, so any product sold in China (and any company that sells its products in the Chinese market) is tainted by animal testing. If that matters to you, you can get in contact with the manufacturer of your favourite products and ask if they're on shelves in China.