From paddock to plate - your steak's journey 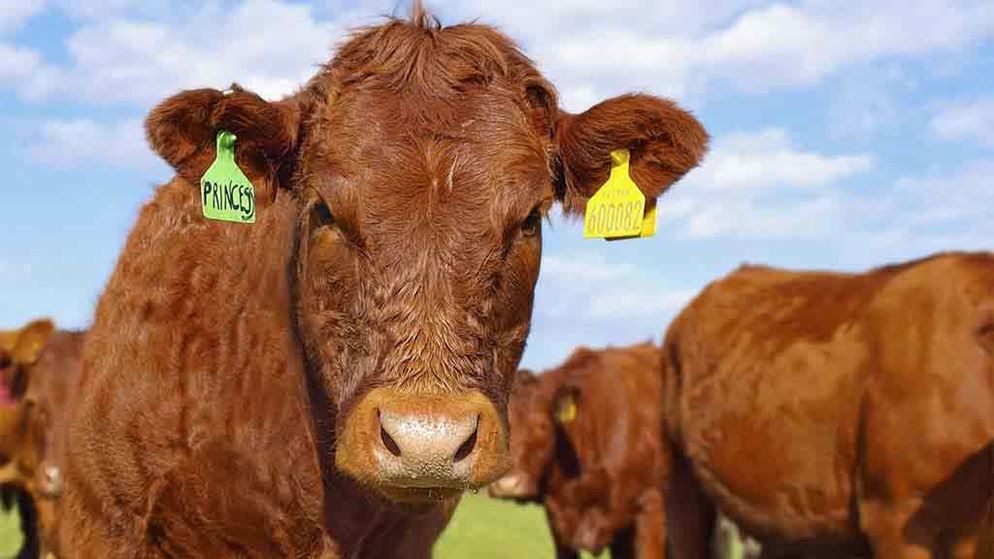 Care about the cow?

When tucking into a juicy steak, have you ever thought about the journey it's taken to reach your plate? Perhaps you buy organic or free range meat, and you're still left wondering if this is the best you can do as a meat eater to support animal welfare?

We help answer your questions by tracing your beef, from cow to plate, looking at each major step on the journey. The article covers:

There are more than 70,000 beef producers in Australia managing 27 million head of cattle. But the cows aren't all treated in the same way. The market has developed two main ways of producing meat to satisfy consumer demands:

For farms practising this model, animal treatment, tracing of origin (or provenance) and soil health are central themes, as is the health value of the meat. Rotational grazing, where cattle are moved around rather than being left in one pasture, is resource intensive but popular as it gives the grass an opportunity to regrow and minimises compaction of soil.

This is how most beef finds its way to supermarket shelves. Cattle raised this way generally spend their early months or years on a farm, before moving to a feedlot to be fattened on a high-protein grain diet. Soil aids, such as phosphate, can provide farmers with almost immediate boosts in feed pasture growth.

Although the chemicals used under the industrial model don't necessarily pose a direct risk to consumers, the nutritional standard of grass that has been exposed to chemicals and not allowed to flourish naturally by rotational grazing and complementary farming methods is questioned by advocates of biodynamics. Some are critical of the nutritional density (the protein content and number of other nutrients present) of beef produced under industrial practices.

Finishing at the feedlot

A feedlot, or "finishing yard", is a confined area where cattle are fed a high-protein, grain-based diet to maximise weight gain before sale. As most cattle are sold by the kilogram rather than by quality, farmers can feel pressure to produce cattle of a marketable weight as quickly as possible, which has contributed to the rise of feedlots.

Consumer demand for grain-fed beef is another contributing factor, according to Dougal Gordon, CEO of the Australian Lot Feeders' Association, the peak national body for the feedlot industry. Grain-fed beef has a softer texture and richer flavour than pasture-fed beef. According to industry body AUS-MEAT, in order to market beef as "grain fed" in Australia, cattle must have been fed in a registered feedlot for no less than 100 days, and for no less than 80 days of that on a high energy grain-based feed ration. Grain-fed young beef spends 70 days in a feedlot (60 days for heifers) and no less than 50 days of that on the grain-based ration.

Australia currently has about 450 accredited feedlots. Gordon says that between 70 and 80% of cattle produced for our two major supermarkets, Coles and Woolworths, spend 60 to 70 days in a feedlot before being taken to the abattoir.

Glenys Oogjes, executive director of animal protection organisation Animals Australia, says that although the feedlot sector is well regulated, there are some problems with the current standard.

"There is a problem inherent in taking a grazing animal out of a paddock and putting it on a high-protein grain diet in a pen. From a behavioural and welfare point of view, we are concerned."

Inadequate shelter for animals in feedlots is also a concern. Some do offer shade, according to Gordon, but it's not a legal requirement. The RSPCA argues that even cattle breeds adapted to hotter climates naturally seek shade, and feedlots should provide this shade without compromising the ability to dry out the pens following wet weather. Gordon says about 60% of cattle in all feedlots currently have access to shade and believes the remainder are mostly located in southern and alpine areas.

Accredited feedlots are audited on an annual basis for animal welfare, environmental and food safety issues. The program is independently owned and managed. Government representatives manage any issues that arise. But the audits are only announced to the feedlot owners, and results are not made public.

Off to the abattoir

From an animal welfare perspective, one of the shortest but most important steps in the paddock-to-plate journey is transportation to an abattoir - and how the stock is treated once it arrives. "What happens to the animal in the time that it moves from farm to kill is the part you want to guarantee is the most humane," says Grant Hilliard, owner of sustainable meat supplier Feather and Bone.

The increasing centralisation of abattoirs in Australia means more cattle are facing lengthy journeys. The Model Code of Practice for the Welfare of Animals: Land Transport of Cattle specifies mature, fit cattle may be transported for 36 hours without water. This can be extended to 48 hours if animals aren't showing signs of fatigue and the weather is mild.

Despite this, some research has found cattle are considerably dehydrated and noticeably tired after 24 hours of transportation.

Click here for a text-only accessible version of this infographic.

The regulation of abattoirs happens at a state or federal level, depending upon whether the abattoir is used for export or domestic purposes. Export abattoirs are regulated by the Australian Department of Agriculture's biosecurity division, while abattoirs working wholly for domestic purposes are regulated by individual state authorities that enforce a national standard. Meat that passes through an export-accredited abattoir may also be sold domestically.

Export abattoirs require a Department of Agriculture vet to be on site during the slaughter process, but domestic meat abattoirs are only required to employ an internal animal welfare officer. Although the Australian Meat Industry Council (the peak representative body of meat processors and retailers) guarantees best practice welfare standards in all abattoirs, Animals Australia campaign director Lyn White says the lack of independent oversight in domestic abattoirs leaves farm animals "incredibly vulnerable".

According to Animals Australia's Oogjes, animal welfare is generally of a higher standard in export-accredited abattoirs, due to the vet's legal duty to report welfare breaches or health-related issues to both the Department of Agriculture and the relevant state authority. But a Freedom of Information request, lodged by Oogjes in March last year and shared with CHOICE, details 55 reports of animal welfare breaches at Australia export abattoirs between 2009 and 2011, including many relating to ill, injured, moribund or "DOA" animals at export facilities. The breaches ranged from animals with pink eye and gangrene infections to ingrown horns, broken limbs and cattle in the very late stages of pregnancy, some full term and calving on arrival. Emergency slaughter was often required, yet in many cases it was not clear what action, if any, state authorities took after receiving incident reports from Department of Agriculture vets.

Consumers in the dark

Consumers have little access to the audit results of the abattoirs our meat comes from. Name-and-shame registers exist in some states. The NSW Food Authority recently uncovered animal welfare breaches at all 10 of the state's domestic slaughterhouse. Despite this, there's still no way of knowing which meat-processing facility your supermarket steak has come from.

Animals Australia, together with the RSPCA, has called for the introduction of CCTV in all domestic abattoirs to increase transparency in an effort to protect both animal welfare and consumer interests.

Once leaving the abattoir, beef can be broken down in dedicated processing facilities and sold by the box or pallet load, or on-sold as a whole carcass. The National Livestock Identification System ensures all beef produced for consumption in Australia can be traced from property of birth to slaughter for the purposes of biosecurity, meat safety and product integrity. But once the animal is broken down and packaged for sale on the supermarket shelf, this flow of information stops and in most cases isn't passed onto the consumer.

"Consumers aren't too worried about which farm [the cow comes from] - they just want confidence that Coles knows," argues Allister Watson, Coles' general manager of meat.

When sustainable models of farming generally result in higher prices on the shelf, is everyday consumption of meat a luxury we can really afford? Hilliard believes it is, provided the process is managed with respect. "We need to know which farm it came from, how the animals were grown, how they were transported and finally how they were slaughtered."

The first step? Move back to the soil, he says, and work upwards. The health of the soil can do a lot for the quality of grass and, in turn, the health of the animals feeding from it. "At a very direct level, ruminants [animals that break down plant-based material and are characterised by a four-chambered stomach] have a very strong part to play in increasing soil fertility," Hilliard says. "If they're used well for this purpose - moved quickly from area to area, working in unison with other animals to stimulate soil health - pastures will improve."

A more transparent process would mean greater peace of mind that you're buying a sustainably grown, quality cut of beef.

Beef that has been pasture fed is known for its intense beef flavour and firm texture.

The industry standard requires cattle to remain in a feedlot for 100 days (young steers for 70 and heifers for 60) in order to be sold on the domestic Australian market as "grain fed". Grain-fed beef has a soft texture and rich flavour.

The Australian Certified Organic Standard 2013 covers both Australian Certified Organic and Organic Growers of Australia. Farms, abattoirs and butchers can apply for certification. Feedlot feeding of livestock isn't permitted - although in certain cases farming systems that are "naturally ideal" for finishing livestock may be allowed when the natural environment isn't suitable for fattening animals. To be labelled organic, beef must only eat feed that is certified 100% organic.

Biodynamic farming incorporates organic principles and places emphasis on maintaining balance in the soil, noting the importance of caring for not only animals and plants, but also the soil from which they are able to grow.

Beef from cattle that haven't been injected with slow-release hormone growth promotants (HGPs) - a common practice to speed up fattening before sale. The World Health Organization and the Australian government allow the use of HGPs in animals for human consumption, but the EU doesn't. HGPs can improve growth rates by 15-30%, but it reduces marbling, which contributes to flavour. Coles has stopped selling fresh beef with HGPs, and Woolworths also offers some HGP-free beef products.