The many meanings of 'free range' chicken

Despite what the label says, chickens are often more cooped up than you may think. 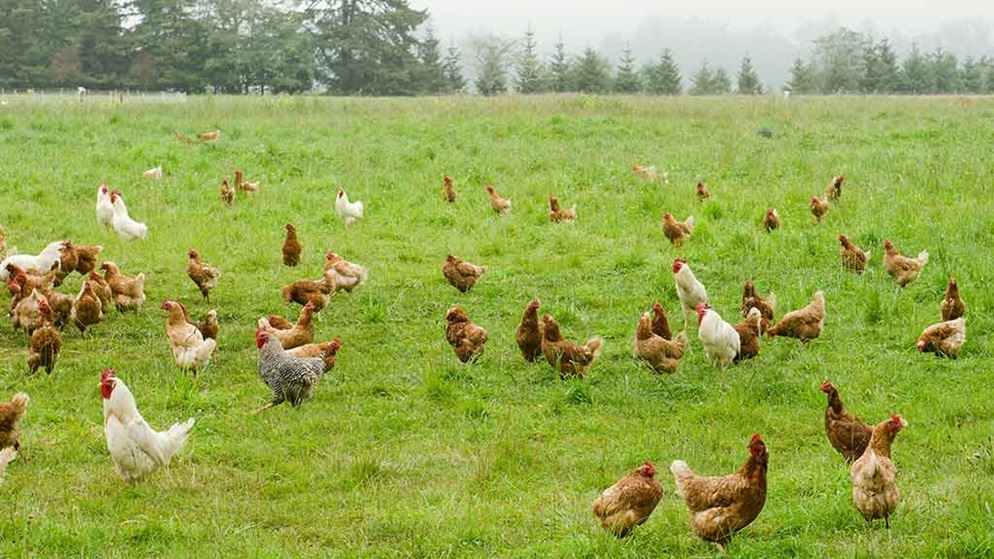 The idea of free-range chickens conjures images of fluffy chooks happily pottering around in grassy fields, and the marketing often reflects this idyllic image. But do free range farming methods reflect consumer expectations?

Shoppers are prepared to pay a premium for free-range chicken meat because they believe that the animals have enjoyed higher welfare conditions than conventionally farmed chickens. However, the only definition of 'free range' set out in the code of practice for raising poultry is that the chickens are given "access to an outdoor range and to indoor shelter".

"The lack of a legally binding definition of 'free range' means that some chickens which are essentially factory-farmed are being sold as higher welfare," says Lisa Chalk from Animals Australia.

While consumers may like the idea of chickens frolicking outdoors, the reality can be quite different. Just because free-range chickens technically have access to the outdoors, doesn't mean they actually go outside.

According to Chalk, most chickens don't go outside before they are fully feathered (around 21 days old), and meat chickens generally begin to be harvested when they reach slaughter weight (from about 35 days old). "This means that, contrary to public perception, some chickens might only spend at most 14 days outside," Chalk says.

The other issue is that the maximum stocking density inside sheds for meat chickens, whether free range or not, is 40kg of birds per square metre, which is about 20 birds at a harvestable weight of two kilograms each. Chalk says this level of density can prevent chickens moving through the throng of birds to get to the openings in the shed wall.

"Even though chickens may have access to outdoors, being timid animals, they might not go out if there isn't enough shade or shelter or there's no protection from overhead predators," adds Meg Parkinson from the Free Range Egg and Poultry Association (FREPA).

And even if the birds don't go out of the sheds – because the outside area is unappealing, or they can't get there because the shed is too crowded – the meat can still be considered to be free range.

"That's why it's important to choose certified free-range products," says Parkinson. "Lower stocking densities mean it's easier for birds to move around and access the outdoors, and have enough space to be comfortable indoors when bad weather means they can't go outside. Certification also means that farms are subject to third-party audits so shoppers know that certification standards are being upheld."

While consumers are attracted to the idea of outside access for chickens, the RSPCA says that going outside is not actually the most important welfare issue when raising meat chickens.

Rather than focusing just on the access to outdoors, the RSPCA says consumers should be looking at brands that offer overall higher welfare farming conditions.

Elise Meakin, communications and campaigns manager for RSPCA Australia, says that, if managed properly, higher welfare can be achieved in an 'indoor system', even without access to the outdoors. To achieve this, farmers have to commit to creating an environment where the birds are encouraged to be active and to express their natural behaviours.

"This can be done by providing environmental enrichment such as pecking objects, perches and sufficient space to move freely, along with bedding in which to dust-bathe and a dark period that's long enough so they can rest properly," Meakin says.

There is currently one brand, Mt Barker, which offers free-range chicken that is RSPCA Approved, with all the other RSPCA Farming Scheme Approved chicken meat being 'indoor' raised.

Each of the accreditation systems set out a code of practice that aims to have higher welfare standards than the basic conditions provided by conventional farms.

So how do the schemes stack up?

* The RSPCA indoor and outdoor certification is the same, except that outdoor must have access to an outside range that meets the RSPCA's specifications.

Although certified free-range and higher welfare products may offer comfort to consumers, it's not easy for shoppers to compare systems; basic information, such as stocking densities, is not generally written on packaging, and people have to do their own comparative research on certification websites. Even then, not all the information – such as how often farms are audited – is mentioned.

Are farmers complying with the certification systems?

"The rise of free range is an industry-led response to consumer concern about animal welfare," says Professor Heather Yeatman, from the School of Health and Society at the University of Wollongong. "But there is little transparency around self-regulated industry standards – for example, how are the free-range farms monitored, what action is taken if a breach of standards occurs, and is this breach publicly declared?"

"When it comes to the validity and transparency of certification systems which claim higher-welfare conditions, the only thing consumers can do is put pressure on industry to declare their monitoring and audit reporting so the public can have some confidence in the system," Yeatman says.

There are also issues outside of the certification systems, where producers might use marketing claims on their products that can be misleading if used inappropriately. For example, you might see claims such as 'free to roam' and 'range reared' on chicken meat labels, but there is no standard definition within the industry of what these terms mean.

There have been several prosecutions in the egg and poultry meat industries, and in 2014 the ACCC declared that it was prioritising clamping down on misleading claims relating to food products.

"Given the significant differences in the welfare of animals in different farming systems, the RSPCA believes there should be a nationally consistent approach to the labelling of welfare-oriented animal products so consumers have reliable information on how the animal was raised," says Meakin.

The Model Code of Practice for the Welfare of Animals is a series of guidelines outlining the minimum welfare requirements for livestock such as cattle, sheep and poultry. Lisa Chalk from Animals Australia says some of the practices that are permitted in the guidelines would be shocking to many people if they knew about them.

"Animals raised for food are denied the legal protections we give to dogs and cats – farmers are allowed to perform surgical procedures like beak trimming or tail cutting without anaesthetics, and [to keep] animals in conditions so cramped they can't move around – if you did that to a pet dog and cat you would be charged."

Chalk says the level of scrutiny varies between states, but there are no compulsory inspections of farms and the only time authorities usually check is when there is evidence of cruelty.

With regards to chickens grown for meat, there are several welfare issues associated with the way the chickens have been selectively bred to grow rapidly and reach slaughter weight in a matter of weeks. For example, rapid growth can cause leg weakness and this, combined with overcrowding, can lead to a lack of mobility and increases the incidence of lameness, skin diseases and the ability to access food and water. Chickens may also die from heat stress caused by poor ventilation or cramped conditions.

Other welfare issues include birds' inability to express natural behaviours such as scratching, foraging and dust bathing, and lack of access to perches. It's also permitted for chickens to be kept under continuous lighting for 23 hours a day.

'Cage free': Meat chickens have never been kept in cages.

Beak trimming: Beak trimming is routinely performed on egg-laying hens, but meat chickens are less aggressive towards each other and so aren't subject to this practice.

Antibiotics: Antibiotics are not used to promote or enhance a chicken's growth, but they can be used as a preventative measure against bacterial infection or disease.