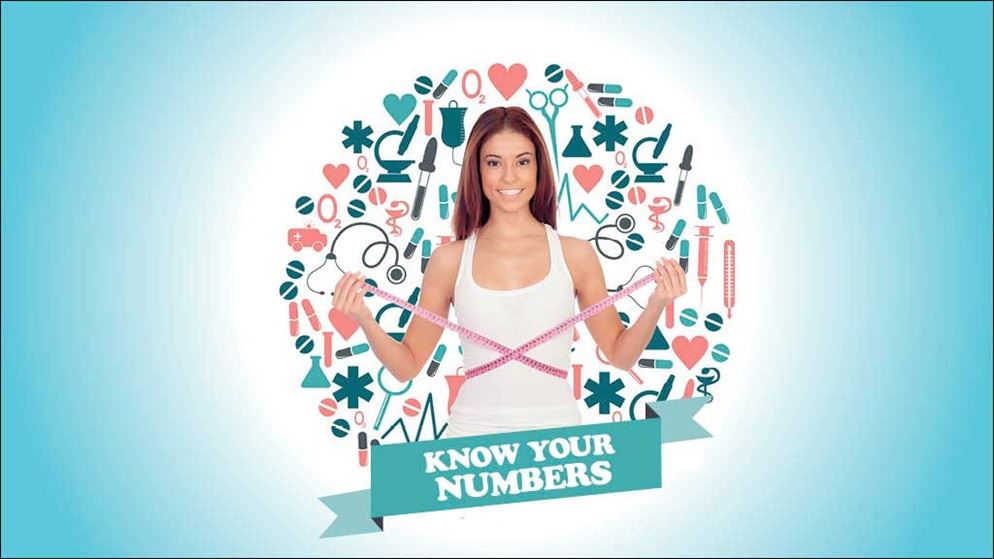 How does your health measure up?

We all know prevention is better than cure, and one way to help prevent illness is to keep tabs on key indicators of your health – weight, blood pressure, cholesterol levels and so on. Some you can measure yourself, while for others you'll need help from your doctor.

But what do the numbers actually mean? What's good and what's not?

In this article, we run through:

Health measurements you can check yourself

You can check the following key health indicators yourself at home. All you need is a tape measure and a set of scales.

Waist circumference is a measure of abdominal fat. Having fat around your abdomen ("apple" shape), regardless of your body size, could be a sign you have an increased risk for diseases such as heart disease and type 2 diabetes. Fat predominantly deposited around the hips and buttocks ("pear" shape) doesn't appear to carry the same risk.

Aim for a waist circumference of:

For men of South Asian, Chinese or Japanese descent, the cut-off is 90cm.

As often as you like – all you need is a tape measure. Measure while standing up with your stomach relaxed and after exhaling. Place the measuring tape at the midpoint between the end of the ribcage and the top of the hip bone.

But BMI does have its limitations:

The figures for being overweight and obese may vary between ethnic groups. For example, cut-offs are lower for Chinese, Indian and Malaysian people, but higher for Maori and Pacific Islanders.

What about my body fat percentage?

Two people with the same height and weight will have the same BMI, yet could have different amounts of body fat. At the same time, there are certain agreed levels of body fat that are considered optimal, depending on age and gender. So, it would seem body fat may be a better measure of health than BMI or waist circumference.

But there's not a lot of data suggesting that body fat measures provide better information about health risk than other measures. It's also much harder to get an accurate result without specialist equipment. So until more definitive research is conducted, BMI and waist circumference will work for most people.

Measurements your doctor can check

For some measurements you'll need the help of your doctor, or referral to a pathology service in the case of blood tests.

Blood pressure is the force of the blood pushing against the walls of the arteries as your heart pumps it round your body. It's always given as two numbers:

Untreated high blood pressure, or hypertension, can contribute to atherosclerosis, a hardening of the arteries and a build-up of fatty deposits called plaque. This in turn can lead to cardiovascular disease, heart attack and stroke. Hypertension is sometimes called the silent killer because it usually has no symptoms – you can have high blood pressure and feel perfectly well.

Smoking, physical inactivity, overweight/obesity, poor nutrition and excessive alcohol consumption can all increase your risk of hypertension. Lifestyle changes can successfully control high blood pressure in many cases, especially if addressed in the early stages.

Aim for less than 120/80mmHg. In general, lower is better, although very low blood pressure can sometimes be a cause for concern and should be checked out by a doctor.

Every two years from age 18 if it's "normal". If you have a personal or family history of hypertension, stroke or heart attack, you'll need to check it more frequently. A doctor is the best person to check your blood pressure, but a home blood pressure monitor can be useful for maintaining heart health and avoiding 'white coat hypertension'.

A small difference of 5mmHg blood pressure between right and left arms is normal. But a repeatedly measured difference in systolic blood pressure of more than 10mm Hg between left and right arms can indicate increased risk of future cardiovascular disease. A difference of more than 20mmHg for systolic or 10mmHg diastolic can indicate blocked arteries in one arm. This could be a sign of peripheral artery disease, which may also affect blood vessels in the brain and heart. Other potential problems with large blood pressure differences between arms include kidney disease, diabetes and heart defects.

It's good practice for your doctor to measure both arms to determine which has higher pressure, and use that as the basis for treatment and the benchmark for assessing changes in the future. However, most doctors measure the arm that's closer to them – in apparently healthy patients at least.

Aim for less than 10mmHg difference in systolic blood pressure between right and left arms.

Whenever your blood pressure is measured.

Cholesterol is a lipid (fatty substance) that occurs naturally in your body. It's essential for proper functioning, but your body generally makes all it needs. Eating too much saturated fat leads to excessive cholesterol in your blood, which can increase your risk of heart disease and stroke.

Smoking, hypertension and being overweight are also risk factors for high cholesterol. Like high blood pressure, high blood cholesterol doesn't produce any symptoms and many people first learn they have it only after a heart attack or stroke.

Cholesterol is transported in the blood by carriers called lipoproteins, of which there are two main types:

Certain lipid ratios are risk factors for some conditions. Having high triglycerides and low HDL and/or high total cholesterol is a risk factor for pre-diabetes, for example, so it's useful to know all the numbers.

Every five years from age 45, but more frequently if you're considered at moderate or high risk for cardiovascular disease.

Chronic hypoglycaemia can lead to brain and nerve damage. Chronic hyperglycaemia indicates diabetes which, if left untreated, can cause progressive damage to body organs such as the kidneys, eyes, heart, blood vessels and nerves.

Almost one in four adults over the age of 25 has either diabetes or a condition known as pre-diabetes (impaired glucose metabolism). People with pre-diabetes are more likely to get type 2 diabetes and are at risk of heart disease. If caught in the pre-diabetes stage, lifestyle changes can reduce the likelihood of progressing to full-blown type 2 diabetes.

The Royal Australian College of General Practitioners recommends screening for diabetes using the AUSDRISK screening tool every three years from age 40. Start at 18 if you're Aboriginal or Torres Strait Islander. A blood glucose test is recommended for those determined by AUSDRISK to be at higher risk of diabetes or with other high-risk medical conditions, such as polycystic ovary syndrome or a previous cardiovascular event (stroke or heart attack) with regular blood tests thereafter.