Is it as good for you as the claims would have you believe? Should you be drinking kombucha?

Homebrewers have been producing kombucha for thousands of years, but increasingly we're seeing kombucha on the drinks menus of restaurants and on tap in cafes and health food stores. And while soft drink sales are falling, the kombucha range stocked in the fridges of supermarkets and petrol stations continues to expand.

So what is it, is it good for you and is all kombucha created equal? We cut through the spin and answer the burning questions about this fashionable ferment.

Our fermented foods review has more on kimchi, kefir and other on-trend ferments. 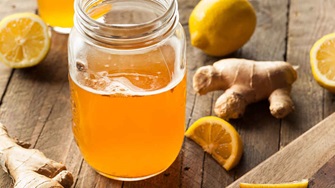 Other ingredients can be added to flavour the kombucha.

Kombucha is a drink traditionally made by fermenting sweetened tea with what's referred to as a scoby (symbiotic culture of bacteria and yeast).

During the fermentation process, the yeast converts the sugar in the tea to alcohol and the bacteria convert that alcohol to organic acids (such as acetic acid). What results is a refreshing, lightly effervescent and slightly sour drink, not unlike sparkling apple cider.

Commercial kombucha is available in a range of flavours including ginger, lemon, raspberry and passionfruit.

Much of its appeal lies in its low sugar content and its reported health benefits – preventing various types of cancer and cardiovascular diseases and stimulating the immune system to name just a few. And with Coca-Cola Amatil reportedly looking to buy into the kombucha craze, it's only going to increase in mainstream popularity.

Is it good for me?

With all the hype, it's reasonable to wonder if kombucha is something we should all be drinking on a regular basis. There are many reported beneficial effects of kombucha, and producers' websites are often liberally sprinkled with testimonials from customers who claim to feel better for drinking it. Some brands even suggest you should drink a bottle each day to enjoy the benefits.

In a poll we ran on CHOICE.Community, 79% (of 47 voters) said they drink kombucha for the health benefits.

Community member paulcg3 told us, "It appeals for its sherbet-y taste, potential for probiotics to reduce bloating, improve mood and avoid sugar."

"We have it for its gut benefits," says Narelle.

And according to Iccopes, who has allergies and intolerances in her family, "the benefits in our wellbeing by drinking kombucha [are] outstanding."

Kombucha certainly has a lot going for it.


There's no doubt that kombucha is a potential source of a wide range of bioactive components. But the composition of the products you buy can vary widely depending on the microorganisms present in the culture, the fermentation time and temperature and the type and quantity of tea and sugar used. And whether those bioactive components make it into our gut in sufficient numbers to have a beneficial impact is up for debate.

CSIRO senior research scientist Dr Michael Conlon, who specialises in diet and gut health, told us, "The health potential of probiotics more generally can vary depending on the number and type of microbes, what you consume them with, and the composition of your own gut microflora. It's likely the number of microbes in kombucha would be much lower than what you might see in a commercial probiotic product." He added that "fermentation generates certain types of acid and other bioactive compounds that can be beneficial, but whether they get through to the large bowel so that a benefit can be gained is unknown."

Studies regarding the claimed benefits of kombucha have largely been carried out on animals, and according to Conlon, "there's a lack of scientific evidence from human clinical trials to support the claims, and more research is needed."

Is it low in sugar? 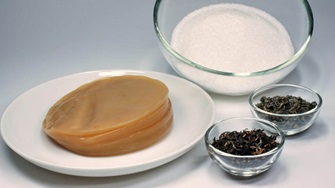 A standard kombucha recipe requires you to add sugar to tea, but the bulk of it is consumed by yeast during the fermentation process, with the amount remaining depending on how long it's left to ferment.

Strictly speaking, a drink must have 2.5g sugar or less per 100mL to be considered low sugar, according to the Food Standards Code. And the sugar content per 100mL of the bottled kombucha products we came across ranged from less than 0.1g (Remedy Kombucha) up to 3.8g (Parker's).

Sugary drinks provide excess kilojoules which can cause weight gain and obesity, eventually leading to health problems such as type-2 diabetes, heart disease and some types of cancer. So the increased availability of lower sugar alternatives such as kombucha in drink cabinets – and more people making a switch to these options – can make a real difference. For someone with a coke-a-day habit (for want of an extreme example), swapping it for a kombucha could reduce their annual added sugar consumption by as much as 12.7kg.

Do you know how much sugar you're eating? We explain why we think added sugar should be labelled.

Does it contain alcohol?

Some alcohol remains in kombucha after the fermentation process, but it's usually in trace amounts – and certainly if it's sold as a soft drink it needs to comply with state-based alcohol legislation (less than 0.5% alcohol by volume in Victoria and Queensland, less than 1.15% elsewhere) and labelled with its alcohol content if it's between 0.5 and 1.15%.

Kombucha's minimal alcohol content can be a major drawcard.

"I drink Kombucha as an alternative option to drinking alcohol," says CHOICE.Community member Amanda Adams. "The non-alcoholic options can be limited in pubs and bars and I can't stand drinking soft drink and juice and there is only so many glasses of sparkling water you can enjoy!"

It may be very low in alcohol, but its tart, lightly acidic flavour profile and palate-cleansing properties make it a drink that readily complements food, much like wine. Community member babbrook told us, "We have both reduced at-home alcohol consumption (wine) significantly and enjoy mostly fresh fruit steeped infusions… It seems to go very well with food." Some producers create menus pairing their kombuchas with different food items.

But controlling the fermentation to achieve a product with just enough acidity and sweetness, and ensuring the alcohol content meets state-based regulations is a balancing act, one that's particularly tricky when producing on a larger scale. And there are instances where this balance was out of kilter, and products have been recalled from sale.

Major US grocery chain Whole Foods Market recalled all kombucha products on its shelves in 2010, including multimillion-dollar brand leader GT's Kombucha, when samples tested were found to be more alcoholic than labelled. And more recently Australian producer Buchi recalled its kombucha drinks from stockists due to it containing alcohol at potentially intoxicating levels.

Because of this potential for the overproduction of alcohol when manufacturing non-alcoholic brewed beverages the Victorian government has produced guidance on the safe production of brewed and fermented soft drinks, which includes testing the alcohol content of every batch produced.

Should I drink it?

Kombucha may be touted as 'an immortal health elixir' – a 'living superfood' that's 'rich in antioxidants and acids'. And while the potential for beneficial health properties is evident, there's no guarantee that these features directly translate into actual health benefits, or even that drinking it will 'make you feel great'. And a claim that 'it harmonises your body, mind and spirit' is clearly puffery.

But if you like the taste or you're looking for an interesting alternative to alcohol or sugary soft drinks – and you don't mind the price tag (about $9–13 per litre in the supermarket) – kombucha is definitely worth a look-in.

Is all kombucha created equal? 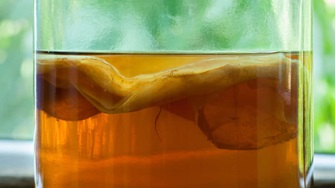 There's currently no standard definition for kombucha, so what's sold can vary widely. And with producers scaling up their production to meet increased demand, the drink you buy may only bear a passing resemblance to a kombucha made in small batches to a traditional recipe.

We reviewed the labels of a range of kombucha products and surveyed Australian kombucha producers – both large and small – to see how their operations and products differed. To get an idea of what to expect, we suggest you check the label – or ask the producer – for the following information:

Kombucha is considered by Food Standards Australia New Zealand (FSANZ) to be a traditional food, meaning it doesn't require pre-approval and there are no specific quality controls or manufacturing practices for it, other than the general requirement under the Food Act that it be safe and suitable.

When FSANZ considered it for novel food status back in 2004, it was noted that although adverse effects had been published in the scientific literature these were attributed variously to the growth of pathogenic bacteria or moulds, pre-existing health problems, excessive consumption or fermentation in containers with high lead surfaces. There had been no reports of illness associated with kombucha made from commercially supplied scobys or commercially prepared ready-to-drink kombucha. It was determined that kombucha tea – prepared under sterile conditions, fermented for the recommended time in an appropriate container, and consumed at a reasonable level – was safe.

We asked food regulator the NSW Food Authority if it had come across any issues regarding kombucha and a spokesperson told us, "While these forms of fermented foods are considered lower risk, if they are not prepared correctly they may present a higher risk. There are a relatively small number of manufacturers producing these types of brewed soft drinks, however their popularity is increasing and with the growth in popularity and subsequent commercialisation of these products there is work underway nationally to better understand some of these emerging foods and promote best practice with manufacturers."