Claims for astounding health benefits abound, but which ones stand up to closer scrutiny? 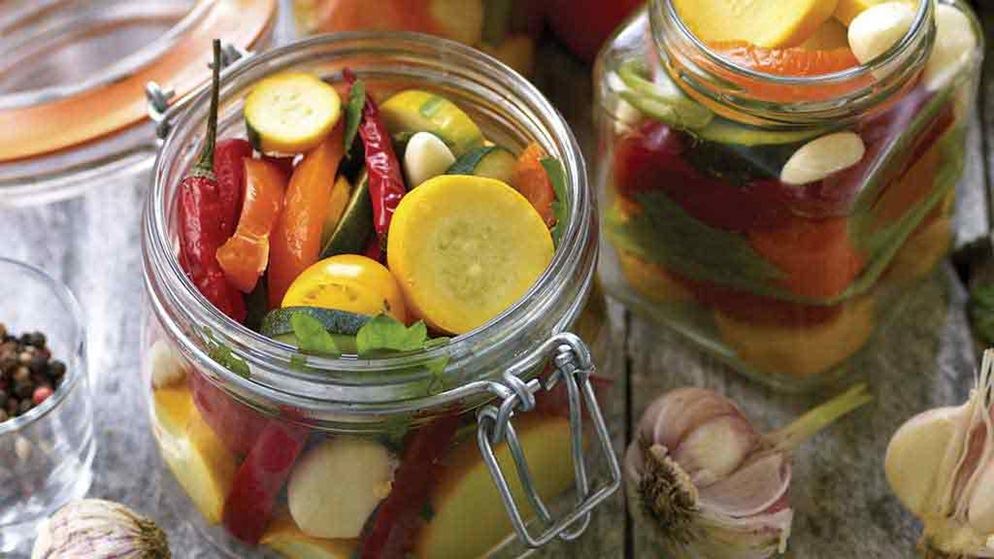 One of the hot topics in food and nutrition circles is fermented foods – from yoghurt and sauerkraut to kefir and kombucha.

As well as adding zing and zest to meals, all sorts of health benefits are spruiked around fermented foods, ranging from boosting your immune system and easing digestive problems at the conservative end of the plausibility scale, to curing baldness, insomnia, arthritis, chronic fatigue syndrome, multiple sclerosis, AIDS, and even cancer at the fanciful end.

CHOICE decided to find out what makes fermented foods special, and see whether they live up to some of these claims.

Fermentation is a metabolic process in which microorganisms such as bacteria, yeast or fungi convert organic compounds – usually carbohydrates such as sugars and starch – into alcohol or acids. For example, yeast converts sugars into alcohol, lactobacilli bacteria turn sugars and starch into lactic acid and acetobacter bacteria turn alcohol into acetic acid (vinegar).

What does fermentation do?

There are many different forms of fermented food and types of fermentation, which vary in terms of the microbes involved, their effects on food, and how much microbe and microbe by-product is left at the end of the process.

With a huge range of products making an important contribution to diets all over the world, the fermented food types more commonly consumed in Australia are:

Yeast in bread ferments sugars in the flour to form carbon dioxide and alcohol. The carbon dioxide is the raising agent in bread, creating air holes. As for the alcohol, most of it is destroyed in the baking process, though some remains in the bread.

A 1998 study found alcohol could be detected by breathalysers shortly after subjects chewed bread. But if you're worried about driving after you've eaten a sandwich, don't be – the effect was short-lived (less than a couple of minutes) and the reading was very low. In fact, you'd have to eat more than a kilogram of bread to get as much alcohol as one stubby of beer.

Uncooked bread, on the other hand, may be riskier. The same authors report two cases of dogs, having eaten raw dough, suffering from "ethanol intoxication" – otherwise known as drunkenness! 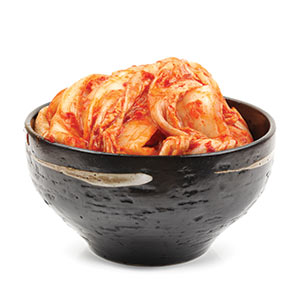 Kimchi, sauerkraut, dill pickles and other pickled vegetables can be fermented using lactic acid fermentation, where lactobacilli bacteria convert the sugars in the vegetables into lactic acid.

The vegetables and spices are mixed with salt or placed in a saltwater brine. The salt then inhibits the growth of unwanted organisms, until the acid produced by the lactobacilli lowers the pH sufficiently to inhibit growth and spoilage. The final product is rich in beneficial microbes. However, if the product is pasteurised for canning or bottling – for example, the sauerkraut you'd find on the supermarket shelf – the organisms are killed.

Lacto-fermented vegetables aren't mass produced – they're the realm of DIYers at home, or found in healthfood stores, delicatessens and speciality stores such as Asian grocers. The shelf-stable pickles you buy in the supermarket have been preserved using vinegar rather than fermentation.

Where salt has been used in lacto-fermentation, the sodium levels in the food can be very high. For home fermentation enthusiasts, one way around this is to kick-start the lactic acid formation by using lactobacilli-rich whey from the top of yoghurt, or using the juice from a previous batch. This allows the amount of salt used to be reduced. 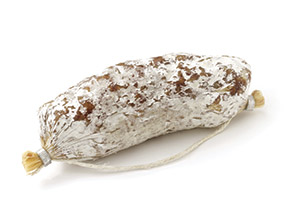 Salami and related meat products, such as pepperoni and chorizo, are made from uncooked meat mixed with salt, nitrate, spices and sugar. Lactobacilli ferment the sugars into lactic acid, which helps coagulate the meat and dry it out when curing, and gives the meat its distinctive tangy taste. The lactic acid and nitrates prevent the growth of harmful microorganisms, allowing the finished product to be stored without refrigeration.

Kombucha is a fizzy drink made from sweetened black tea, fermented with yeast and bacteria and served cold. The yeast turns sugar into alcohol and carbon dioxide, and bacteria called acetobacter, which are very common in the environment, convert the alcohol into acetic acid, giving it a sour taste. A small amount of alcohol may remain.

There have been some deaths linked with kombucha, likely due to dodgy hygiene during fermentation. Because of the variability in the quality of home brewing, health authorities have warned people against drinking large amounts of it.

Lactobacilli bacteria convert lactose sugar in milk into glucose and galactose, which break down further into lactic acid, giving yoghurt its sour taste. Live bacteria remain in the yoghurt and provide a valuable contribution to gut microflora.

A carbonated and slightly alcoholic fermented milk drink that looks a little like runny yoghurt, kefir is produced using a lactobacilli bacterial culture and also yeast. Lumpy bits resembling cauliflower, called grains, can be found in the final product, and are used to start the next batch. 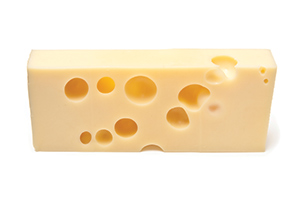 Lactic acid formed by lacto-fermentation acidifies the milk, causing it to curdle when heated. Bacteria – and sometimes added moulds – continue to be involved in ripening cheese as it ages, producing distinctive flavours and textures.

If you've ever tried olives straight from the tree, you'll know they're very bitter and hard. Treating olives in lye (sodium hydroxide) or saltwater brine, or even just salt, helps remove the bitterness. The substance that makes olives bitter is also toxic to bacteria, so once it's removed spontaneous bacterial fermentation takes place. The sugars in the olive are converted into lactic or acetic acid, and the olive gets softer.

Olives pressed for olive oil aren't fermented, and it's actually the bitter polyphenol compounds responsible for olive oil's health benefits and long shelf life, thanks to their antioxidant action. 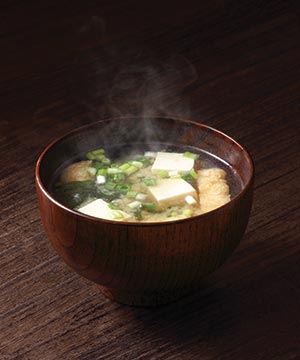 Fermented soybean products include miso, tempeh and soy sauce. Using desirable mould species and bacteria, the fermentation process breaks down phytic acid, increasing the availability of certain nutrients, and oligosaccharides, which can cause gas and indigestion. The fermentation process also enhances flavour. While some microbes may remain in the raw product, they are destroyed by heat.

In the initial fermentation, yeast turns sugars in fruit into alcohol – think wine or cider. Then, acetobacter start fermenting the alcohol into acetic acid. The vinegar is "complete" when all the alcohol is consumed. At this point manufacturers usually pasteurise and filter the vinegar, to kill and remove the bacteria and prevent them breaking down the acetic acid into carbon dioxide and water. However, unpasteurised and unfiltered raw vinegar still contains the bacteria.

Beer and wine have been made for thousands of years, fermenting sugar into alcohol and carbon dioxide.

In winemaking, naturally occurring yeast on fruit skin ferments the crushed grapes. In modern-day winemaking though, yeasts are added to provide a consistent result. The yeast is then filtered out of the wine.

In beer brewing, yeast is added to a starch source from grains, such as malted barley or wheat, water and hops for flavouring. While most commercial beer is pasteurised or filtered before bottling, some commercial beer and homebrew may still contain live yeast.

Bacterial and yeast fermentation of cocoa beans after harvesting develops the chocolate aroma.

Ripe vanilla pods have no vanilla aroma. But when curing in the sun and in insulated boxes, they undergo fermentation, where microbes convert glucovanillin (a sugar) into the aromatic vanillin flavour and glucose.

One of the key claims for the health benefits of fermented foods is their contribution of live microbes – ostensibly "good" microbes – to the existing colonies in the gut. Collectively called the microbiome, these microbes exert powerful effects on our bodies; when they're out of whack they have been linked with intestinal and bowel conditions such as ulcerative colitis and irritable bowel syndrome, immune disorders such as allergies and type 1 diabetes, and metabolism and metabolic diseases, including type 2 diabetes and obesity. They've even been linked with mental health disorders.

Probiotics are live microorganisms – such as bacteria, yeasts and fungi – that in adequate amounts may have health benefits. Found naturally in some fermented foods, and also available in tablet form, studies have shown they can improve digestion, help protect against disease, and enhance immune function.

Strains of lactobacillus and bifidobacterium bacteria are the most commonly used probiotics, as they can survive the passage through your digestive system to the gut, including the highly acidic conditions of your stomach. These are mostly found in yoghurt and culture drinks like Yakult.

Another claim about some fermented foods is that they help prevent cancer. Studies from Sweden and the Netherlands have found fermented milk products reduce the risk of bladder cancer.

A study of Polish immigrants to the US, who eat about 4kg of raw or lightly cooked cabbage (usually in the form of sauerkraut) per year, found the incidence of breast cancer in those women was three times that of their counterparts living in Poland, who eat about 13kg per year. Cooking cabbage seems to destroy the critical nutrients, whereas fermentation makes raw cabbage more palatable while also preserving it.

However, some fermented vegetables and fish products have been linked with increased rates of cancer, especially nasopharyngeal and gastric cancers, possibly due to the N-nitroso compounds formed in the process.

Other theories for the apparently increased rates of cancer are the high levels of salt involved, the addition of spices such as chilli, or simply that some of the cancer-fighting nutrients in fresh vegetables are destroyed in fermentation, and that by relying on preserved vegetables people aren't gaining the benefits of fresh vegetables.

While some fermented foods appear to have health benefits, they're certainly no magic bullet and their potential benefits must be considered in the context of overall diet and lifestyle. For example, while a traditional Japanese diet, which is high in fermented foods, appears to promote good health and longevity, so too does the Mediterranean diet, which doesn't feature anywhere near as many. And there is such a thing as too much beer or wine!

Although the foods with live microbes appear to be the most beneficial, take care to ensure there's no contamination with harmful microbes, such as listeria, E. coli and botulinum. And if you're watching your sodium intake, note that some fermented foods have very high levels of salt as well.