Are you contributing to the depletion of tuna fish stocks?

How to read the label to find the most sustainable canned tuna. 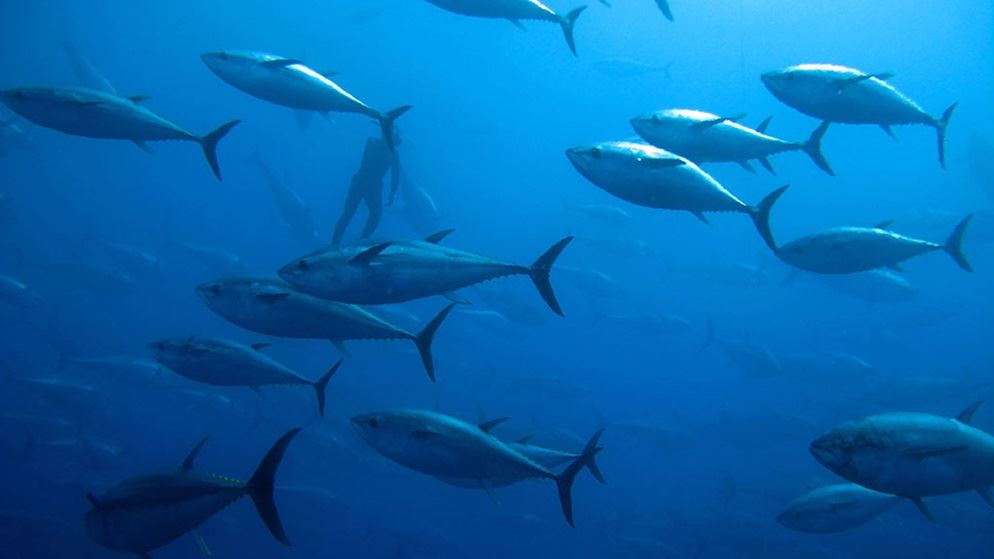 Tuna stocks are under threat, but there's a way to eat more sustainably.

Canned tuna is not just a tasty, protein-rich snack – it's a massive global industry. How massive? Try around 4 million tonnes caught every year, which has put enormous pressure on stocks.

Sustainability-conscious consumers have to be careful which tuna products they buy, because some species are at risk and others are overfished, explains Dr Quentin Hanich, leader of the Fisheries Governance Research Program at Wollongong University.

"On a global level, there is a failure of cooperation between countries who can't agree on necessary compromises that will protect fisheries," he says. "And in the absence of that consensus, labelling and consumer pressure sends a strong market signal that people want sustainable fishing."

When attempting to choose an eco-friendly tuna, you're bound to be bewildered by opaque packaging claims. But with a little know-how, you'll be able to recognise sustainable tuna on the supermarket shelf.

One recent development looks like good news for the world's tuna stocks. In early February 2016, major canned tuna company John West Australia announced a partnership with the Marine Stewardship Council, WWF and Pacifical (a tuna supplier committed to sustainable methods) to make what it calls "the single biggest brand commitment to help end unsustainable fishing methods within the canned tuna industry in Australia".

It appears to be more than a marketing move. "As a result of a collaborative effort by WWF, Pacifical, MSC and John West, Australians will now see over 100 million cans of clearly labelled Pacifical-MSC-certified sustainably sourced tuna in supermarkets," WWF Australia CEO Dermot O’Gorman says. "The magnitude of this – affecting a huge 43% of Australia's canned tuna – makes this a world first."

The John West collaboration with environmental interests is a big step in the right direction, but there's still plenty of opportunity to be confused by canned tuna labelling. "There are a variety of fish names on packaging," says Nathaniel Pelle from Greenpeace. "If you see 'thunnus' or 'genus thunnus', it simply means tuna. Look for skipjack (Katsuwonus pelamis), which is considered the most sustainable tuna."

Skipjack accounted for 68% of the 2.6 million tonnes of Western Pacific tuna caught in 2013, and its fish stocks are considered "healthy" by the Oceanic Fisheries Programme (OFP), an organisation that provides fish stock data to fishers in the Western Pacific Ocean.

You'll also come across yellowfin (Thunnus albacares) tuna, which is controversial because of disagreement about its level of sustainability. The OFP and the International Seafood Sustainability Foundation (ISSF), an industry body comprised of some of the world's biggest commercial fishing companies, says yellowfin stocks are healthy.

However, Greenpeace considers yellowfin stock levels "near threatened" and says that, without renewed and coordinated efforts, yellowfin will soon fall into the threatened category.

"Yellowfin is fished at its limit in certain parts of the Central Pacific and there is probably overfishing in the Western Pacific," says Hanich. "It's not a black-and-white situation and depends on which fisheries the tuna comes from. So skipjack is a safer choice if the label does not mention the catch region."

In August 2015 Coles released a new range of canned yellowfin tuna coming from the Maldives in the Indian Ocean. Find out how the sustainability of fish stocks can change and whether this range is sustainable.

Another species used for canning is longtail tuna (Thunnus tonggol). Pelle says he wouldn't recommend tonggol as a sustainable choice because there are not yet enough complete stock assessments, "so we don't know how healthy the fish stocks are".

The best approach to sustainability, says Hanich, is the pole-and-line fishing method, in which fish are caught with a single pole, line and hook. Compared to the more prevalent purse seine method (see below), pole-and-line is considered the best way to reduce overfishing and bycatch.

This method also requires more fishermen than the big industrial operations, creating more local jobs in the Western Pacific (where almost all Australian tuna comes from).

A purse seine is a large floating wall of netting that encircles a school of fish and is 'pursed' on the bottom, preventing fish from escaping by swimming downward. The catch is harvested by hauling the net aboard or bringing it alongside the vessel.

Purse seine fishing vessels are responsible for nearly 62% of the global tuna catch. Greenpeace's position on purse seine is that it's acceptable, as long as it's not combined with fish aggregation devices (FADs).

FADs are floating objects that attract tuna, but can also draw the attention of other marine life. Referred to as 'bycatch', these species are often swept up in the nets along with the 'target' species.

With FADs in use, skipjack tuna often shoal together with young bigeye tuna (Thunnus obesus), which is classified as over-fished in the Western Pacific, or yellowfin tuna, as well as sharks, rays and turtles. ISSF statistics show that FADs double the bycatch rate in the Pacific; in the Atlantic, FADS increase bycatch rates eight-fold.

Verifying whether a fish catch is FAD-free is tricky. "If a canned tuna label says purse seine but does not say 'FAD-free', a better sustainable choice is pole-and-line caught tuna," says Pelle.

According to Pelle, the massive commercial purse seine operations in the Western Pacific are dominated by Japan, Korea, the United States and Taiwan. He says these huge ships harvest local resources but often exclude local fishers, and they can haul up 3000 tonnes of tuna in a single fishing trip – almost double the annual catch of some Pacific Island countries.

"Only 5 to 10% of value of the whole tuna catch goes back to Pacific countries," Pelle says.

"The label 'dolphin friendly' is completely irrelevant in the Western Pacific," says Hanich. "It's the equivalent of saying it's koala friendly, because the chances of catching a dolphin are about the same as catching a koala in the nets."

In the Western Central Pacific, where tuna for the Australian market is predominantly sourced, dolphins tend not to be caught in tuna nets because they don't associate with schooling tuna. But it's a big problem in parts of the Eastern Pacific and Central America, where fishers deliberately follow dolphins, which lead them to tuna stocks.

Pelle agrees, saying the dolphin-safe logo is "part of a self-certifying system that isn't credible."

The term is misleading, as drift netting was banned by the United Nations in 1991. Although there is illegal drift netting occurring around the world, tuna fisheries supplying Australia are unlikely to be affected.

Who is the Marine Stewardship Council (MSC)?

Despite this criticism, MSC offers the most rigorous brand certification on canned tuna, says Hanich. "It has a certified supply chain from fishing boat to processing plant to wholesalers and retailers."

Each year since 2010, Greenpeace has released a list of the most sustainable brands, which takes into account species, fishing methods, labelling, transparency of supply chain auditing, and the level of support for sustainable tuna practice through political, industry and consumer channels.

"Every major brand in Australia has now agreed to phase in FAD-free, responsibly caught tuna by 2016," says Pelle. "Safcol have been the leaders in this change and were the first mainstream company in 2012 to embrace 100% pole-and-line caught tuna, and this helped change the whole industry."

Australian consumers now have the best sustainable tuna in the world, he says.

How do supermarket tuna products stack up?*

Fish4Ever: Described as "the benchmark of sustainable fishing practice", it has 100% pole-and-line-caught tuna.

Aldi: All new stock on order is FAD-free and pole-and-line, although Aldi is still using yellowfin tuna in its Ocean Rise range. Portview is a better option.

John West: Currently using 100% skipjack tuna, but its FAD-free and pole-and-line stock may not be on the shelves until late 2015.

Sirena: 100% pole-and-line, but uses yellowfin and tonggol tuna, and has poor labelling that doesn't specify the species.

Woolworths: Home Brand is now FAD-free. The Select brand is skipjack and all pole-and-line, but the Woolworths brand continues to use yellowfin and loses marks for poor traceability of its supply chain.

IGA: Has two pole-and-line tuna products in its private label range and is heading towards a FAD-free range during 2015, but their sourcing claims are not backed up by effective third-party audits.

Sole Mare: Its new range is 100% cent pole-and-line, but exclusively uses yellowfin tuna and has not yet obtained audited supply chain guarantees of sustainable sourcing.

Greenseas: 100% skipjack tuna from the Western Central Pacific Ocean, but the company has failed to provide evidence that it's sticking to its commitments to go FAD-free.

Despite its current use of yellowfin tuna, Aldi has taken a potentially helpful step toward letting you know whether the canned tuna in its stores is sustainably sourced. Through its 'trace your tuna' program, the company says it has "traced our entire canned tuna range from where it was caught, through our supply chain and into our stores".

Aldi's tuna cans have the Food and Agriculture Organization of the United Nations (FAO) catchment area number printed on the lids, which means you can find out where the tuna was caught using FAO data that matches the number with fisheries around the world. Making a connection between the location of the fishery and whether the tuna was sustainably sourced would be a reach for most consumers, however.

You'll see omega-3 claims on canned tuna, but products can be labelled "a good source of omega-3" when containing at least 60mg of DHA and EPA per serving. However, this is just a tad over 10% of the Heart Foundation's recommended 500mg of omega-3 daily. Canned tuna is generally not the best source of the essential fatty acid omega-3 compared to other oily fish, such as fresh salmon, mackerel or canned sardines.

The omega-3 content of canned tuna varies widely, so you'll need to carefully check the nutrition panel rather than relying on 'good source' labelling. For example, we found omega-3 content ranging from 80mg per 100g for John West Tuna Tempters Mango Chilli, to 970mg per 100g for the Safcol Tuna Pieces with Lemon and Cracked Pepper. In comparison, canned pink salmon has around 1410mg per 100g.

Buying tuna in oil will add kilojoules. John West Tuna Slices in Springwater has 484kJ per 100g; the John West Tuna Slices in Olive Oil Blend has 690kJ. Flavoured packaged tunas marketed as lunch snacks can also have extra sodium and sugar added to bump up taste. The Sirena Bruschetta Tuna Dill & Pickle has 526mg of sodium; Sirena Tuna in Springwater & Lemon has 162mg per 100g.