Five of the least healthy pizzas

From Domino's to Pizza Hut, we reveal the fast food chain pizzas you're better off avoiding this summer. 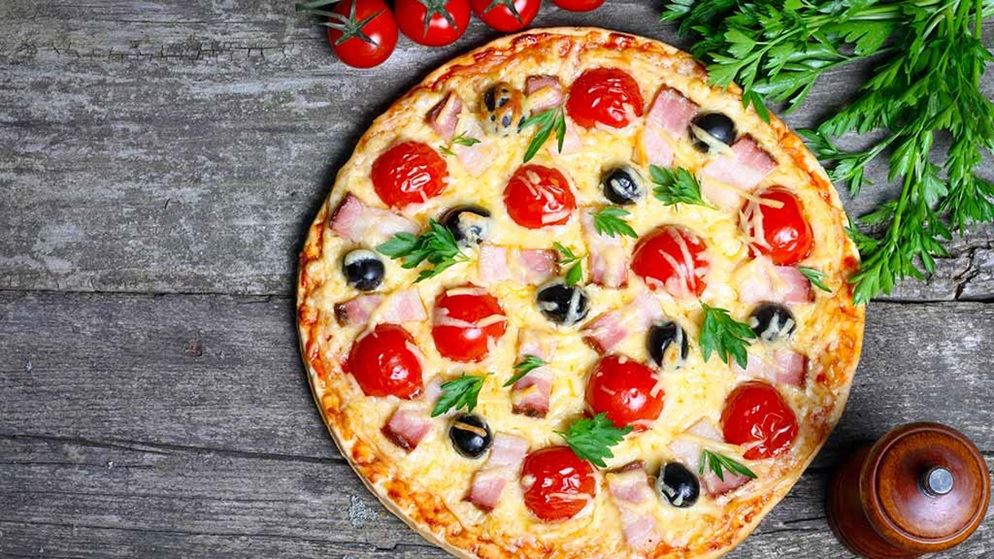 Any way you slice it

Summer's here, the weather's good and the days are long. What better way to enjoy yourself than to order a few pizzas, kick back and relax with friends and family in your backyard or down at the beach?

Pizza is the fast food of choice for Australians, according to CHOICE's latest Consumer Pulse survey. And no wonder, when it lends itself so perfectly to no-fuss, no-cutlery-or-crockery dining in the great outdoors.

But some pizzas are so high in kilojoules – and so loaded with fat and salt – you might want to think twice before you order, and perhaps choose a healthier option. Your body will thank you later.

Five of the worst

We looked at the kilojoule content of pizzas on the menus of Australia's favourite pizza chains – focusing on each chain's 'large' pizzas for a fair comparison – and identified the most kilojoule-laden offerings from each. We also point out some lighter alternatives. *The kilojoules in brackets are for a 'large' 8-slice pizza. 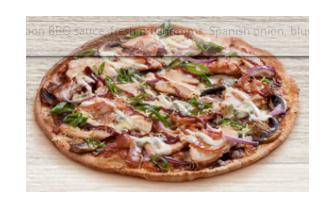 Some of you could easily wolf down a 12-inch pizza on your own. But with this meaty feast, you might want to reconsider. At 1120kJ a slice, it's not for the faint-hearted, and it has more kilojoules than any other large pizza we looked at.

Even if you stop at just two slices, you've eaten a quarter of the 8700 kilojoules the average Australian adult consumes in a day; all eight slices, and you've eaten more than a whole day's worth, with barely a vegetable passing your lips.

Pizza Capers' The Flying Pig, also weighing in at more than 1000kJ a slice, is not much better. 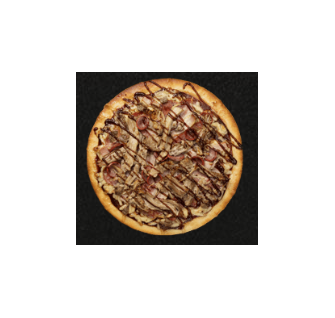 As the name suggests, this pizza is definitely one for the carnivores, boasting not one but six types of meat (pulled pork, bacon, ham, pepperoni, sausage and beef) in the topping. At 1046kJ a slice, you'll hit just shy of a quarter of the average adult daily kilojoule eating two slices of this 11-inch pizza.

Pizza Hut's Loaded Pepperoni, also more than 1000kJ a slice, isn't much better. Both feature in the top five most kilojoule-laden pizzas across all five chains.

And not only do processed meat toppings bump up the saturated fat and kilojoule content of a food, they're a big contributor of sodium, which can also weigh heavy on your heart. 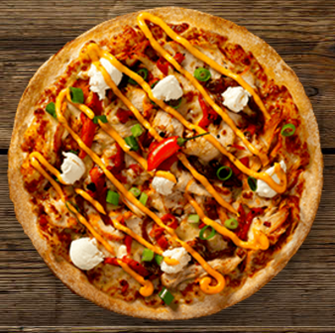 Its description of marinated chicken breast fillets, shallots, roasted capsicum, caramelised onions and bocconcini on a tomato base, topped with Peri-Peri sauce and mozzarella sounds fairly innocuous – it even contains veggies. But the Peri-Peri has more kilojoules than any other Crust large pizza – at 984kJ a slice, it's in the top five most kilojoule-laden pizzas across the chains.

If you're counting kilojoules, only order its range of 15-inch x 9-inch 'Upper Crust' pizzas if you're planning on sharing.

The name says it all, really. Just like its namesake in the burger world, this pizza consists primarily of minced beef, bacon and cheese. The bacon has also been 'maple cured' (adding sugary 'goodness') and the pizza is topped with mayonnaise.

The Double Bacon Cheeseburger pizza contains 834kJ a slice, which is pretty impressive given its comparably diminutive size. Domino's says its pizza diameters vary depending on the type of base, so we ordered this pizza with a standard 'classic crust', and it measured 26cm (10 inches) across. This could explain why, on average, Domino's pizzas have fewer kilojoules than the other chains.

It may not be in the same league as Pizza Capers' Bourbon Chicken & Bacon pizza, but of its standard 12-inch pizza range, The Carnivore is Eagle Boys most calorific offering. If you wolf down a whole one, you'll have chewed up 75% of your average daily intake in a single meal.

Eagle Boys also has a range of 'Mega' pizzas, which at 15 inches in diameter are the largest on offer across the chains. Its Ultimate Mega Meatlovers, at 9717kJ, has more kilojoules than any other pizza we saw. The mega pizzas are cut into 16 slices for sharing, however, so on a per-slice basis have less kilojoules than many of the large pizzas. This helps – as long as you limit the number of slices you eat.

Why should we care about kilojoules?

About 63% of Australian adults, and 25% of children, are overweight or obese.

Unhealthy eating, particularly the overconsumption of discretionary foods – ones that are not necessary for a healthy diet and are too high in saturated fat and/or added sugars, added salt or alcohol and low in fibre – contributes to this problem.

According to the last national nutrition survey, 35% of our kilojoules, on average, are coming from discretionary foods, which include biscuits, cakes, pastries, pies, processed meats, commercial burgers, fried foods, potato chips, crisps and pizza. Ideally, we should make healthier food choices and limit the amount of discretionary foods we eat. But when we do eat food like pizza, choosing lower-kilojoule options can make a difference.

Kilojoule labelling on fast food menu boards is mandatory in NSW, ACT and SA (if there are 20 or more outlets in the state or 50 or more nationally), with Victoria to follow in 2018. Having this information available at point of sale allows you to make a more informed decision about what you buy.

A word on sodium

High intakes of sodium can increase blood pressure, which in turn can increase the risk of developing heart and kidney problems, so it's a good idea to limit the amount of foods we eat that contain added salt. Pizza is notoriously salty, with processed meat toppings being a big contributor.

Each slice of a large Bourbon Chicken & Bacon pizza from Pizza Capers, for example, contains 711mg sodium. When you consider that 920mg of sodium a day is thought to be an adequate intake for an adult, just two slices of this pizza will give you way more than you need. Eat the whole pizza and you've even blown the recommended daily upper limit of 2300mg.

How to choose a healthier pizza

Fast food pizzas are generally high in kilojoules, fat and salt, and low in fibre and vegetables. But you can make healthier choices:

We compared the kilojoule content of 149 fast food pizzas. We've listed them below in brand order. To order by another criteria, simply click on the column headings.

When you order pizza from these chains, the default option is 'large' – all with eight slices per pizza – so we've focused on this size for the purpose of this review. Some pizza chains also offer 'small' or 'medium' size or even larger pizzas, but the number of slices can vary.