How to choose a healthy yoghurt

Are you eating a health food or a "dairy dessert"? How to pick the healthiest yoghurts from the nutrition traps. 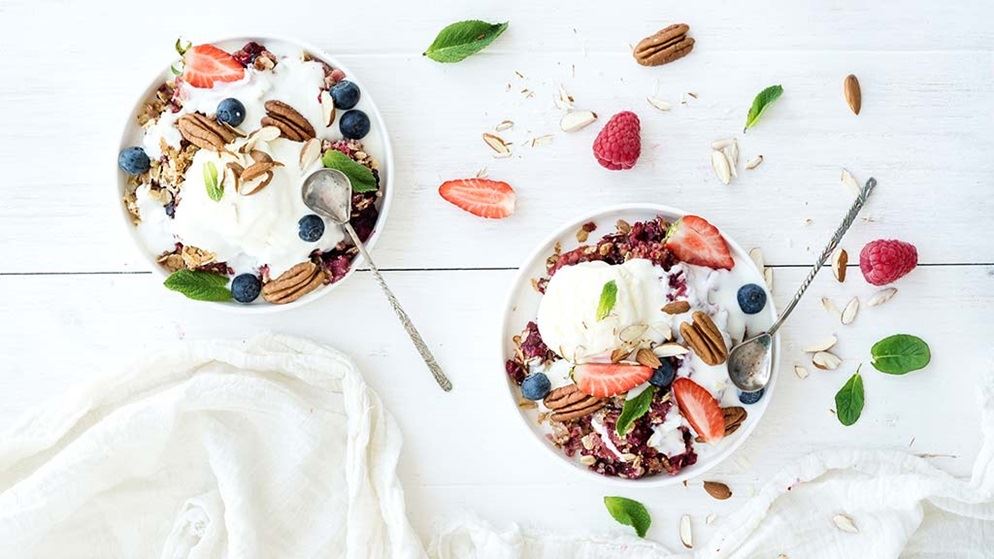 Yoghurt (also spelled "yogurt") is often marketed as a healthy, calcium-rich product. Yet some of the products in the supermarket fridge are closer to a "dairy-based dessert" than a health food. CHOICE decided to look behind the hype and find out how to pick the nutritious yoghurts from the products that should ring alarm bells.

At its simplest, yoghurt contains milk and live cultures (bacteria) that cause the milk to ferment, creating the distinctive sour taste. But modern commercial yoghurts tend to have extra ingredients such as sugar, cream, thickeners, gums, starches and flavours.

"The healthiest yoghurt choice is low- or no-fat plain yoghurt," says Kate Gudorf, an accredited practising dietitian and spokesperson for the Dietitians Association of Australia. "But if you need to sweeten it yourself, add a teaspoon of honey or chopped fresh fruit."

If you're buying flavoured yoghurt, Gudorf recommends trying to find one with less than 12g of sugars per 100g. Natural or plain yoghurt has around 6mg of sugars per 100g due to the naturally occurring carbohydrate lactose. Anything above 6mg will be added sugar, generally in the form of fruit pieces, fruit puree, honey and sugar.

Packaged breakfast yoghurt pots with muesli are an easy option, but the convenience can come at the cost of huge sugar levels. In the past we found a product that listed the nutritional information per 100g serve, which was a deceptively low 594kJ. But the small print showed there were actually 2.25 serves in the pot. If you could be bothered doing the numbers in the supermarket, you'd find that the 225g pot actually had a hefty 1339kJ and 42g of sugars (more than eight teaspoons). To put this another way, the whole pot had about the same number of kilojoules as an Almond Magnum ice-cream, but three more teaspoons of sugar. And really, who's going to divide a pot smaller than a metric cup into 2.25 serves? 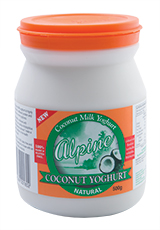 The passion for all things coconut (for example, coconut oil and coconut water) has spread to the yoghurt aisle with Alpine Coconut Yoghurt. Just like coconut oil, coconut milk yoghurt is a high-kilojoule, high-fat, low-calcium choice. Compared to full-fat milk-based yoghurts it has double the kilojoules, with 785kJ per 100g and a whopping 11.5g of saturated fat - three times more than the full-fat yoghurt we looked at.

Coconut milk has about 4mg calcium per 100g (compared with 193mg for regular yoghurt), and there's no calcium listed on the package so we assume no extra calcium has been added.

The Australian Dietary Guidelines says a serve of yoghurt is ¾ cup or 200g. If you want a yoghurt to eat on the go, look for a pot that's 200g or less. A 'between meals' snack should have no more than 600kJ. 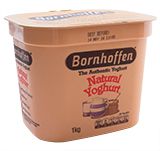 Calcium is a major health drawcard, but we found wide variations in calcium levels – from about 98mg per 100g to 206mg. "This comes down to the difference in processing methods," says Gudorf, "as some manufacturers add extra milk solids, which add calcium. Others, such as strained Greek yoghurt, remove liquid whey, which reduces calcium levels."

Although yoghurt can be a good source of calcium, it's unlikely to meet your total daily requirement. It's recommended that adults consume 1000–1300mg daily.

For children, the recommendations are:

Although the "squeezy" yoghurt pouches for babies and kids are all the rage and look very similar in size and design with similar sugar levels, there's a big difference in calcium levels. Products we looked at ranged from 132mg per 100g to a healthy 350mg. 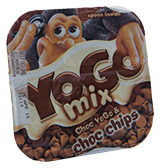 Be aware when choosing kids' yoghurt that sugary dessert products can appear on the shelves alongside healthier offerings. We found YoGo Mix Choc Chips, which doesn't contain any yoghurt but has 1090kJ and 29.9g sugar per 150g pot, in the same section as the 140g Vaalia Kids Strawberry Yoghurt (486kJ/11.2g sugars).

As most products aimed at kids have classic pester-power characteristics – bright packaging splashed with recognisable cartoon characters or cutesy images – it's very easy for any harried parent to grab a package your child likes the look of without checking the ingredients and sugar levels. A product that has the word "dessert" on the packaging should ring alarm bells.

Beginner's guide to yoghurt (or yogurt)

The removal of the whey also means Greek yoghurt often has lower calcium levels. Some brands also add cream, but this is not a traditional ingredient. Yoghurts must conform to food standards pertaining to claims like "low fat", however there are no regulations in Australia specifying that a particular style of yoghurt, such as Greek, has to be made in a certain way or contain particular ingredients.

Not strained and often containing thickeners such as cream, milk solids, gelatine and gums, which are added to create a creamy texture.

Milk and live cultures are added straight to the pot, which, makers claim, means thickeners such as gelatine need not be added.

Yoghurt without flavouring or added sugar.

Made by adding an enzyme during processing that breaks down the lactose into simple sugars, so it's safe for those who are intolerant to lactose.

Has the same ingredients as thick yoghurt but is thinner and designed to be poured over cereal or drunk by itself.

An ethical-ecological approach to agriculture that focuses on the relationship of soil, plants and animals. Like organic, it emphasises sustainability and does not involve chemicals in production.

Interested in culture? We look at the health benefits of kombucha to see if it's as good for you as people say.

Are "friendly bacteria" (aka probiotics) effective in yoghurt?

Probiotics are "friendly" bacteria that can help restore the balance of microflora in the gut if it's been upset by disease, stress, poor diet or antibiotics. In a healthy bowel, these bacteria fend off harmful microorganisms, aid digestion and nutrient absorption, and contribute to immune function. 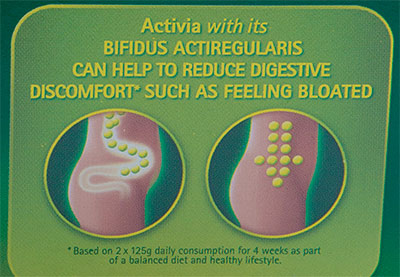 Evidence of the benefits of probiotics in yoghurt has been difficult to validate scientifically. In the EU, use of the word "probiotics" has been banned on packaging as the word implies a health benefit, although individual strains of bacteria may be mentioned.

In 2008, a class-action lawsuit in the US claimed Danone overstated the health benefits of its Activia yoghurt by claiming it could strengthen the body's defences or regulate digestion because of bacteria it contained. Danone settled out of court for $US35 million and changed the wording on its packaging.

To avoid falling foul of health claim regulations and still be able to spruik the benefits of probiotics, food companies use vague, pseudo scientific-sounding language and fancy trademarked names such Danone's "Bifidus ActiRegularis" (its scientific name is actually B. lactis DN-173010).

The packaging claims its bacteria "can help to improve digestive discomfort such as a bloated feeling" and is accompanied by a funny little diagram. But this health benefit is conditional on eating 250g of the yoghurt each day over four weeks as "part of a varied diet and health lifestyle".

"Don't eat yoghurt just to get probiotics," advises Gudorf. "If you're concerned about IBS [irritable bowel syndrome] or bloating see a dietitian who specialises in gut health who can set up a diet plan and direct you to the correct bacteria strain."

To maximise your probiotic benefits, look for yoghurts that have at least 100 million CFUs. Some yoghurts mention the names of the cultures but don't list how much it contains, so you have no idea how much – or how little – bacteria is in the product.