A hands-on look at Dell's 13-inch Inspiron 7000 2-in-1 which has Intel's 8th-generation processor and does double duty as a tablet. 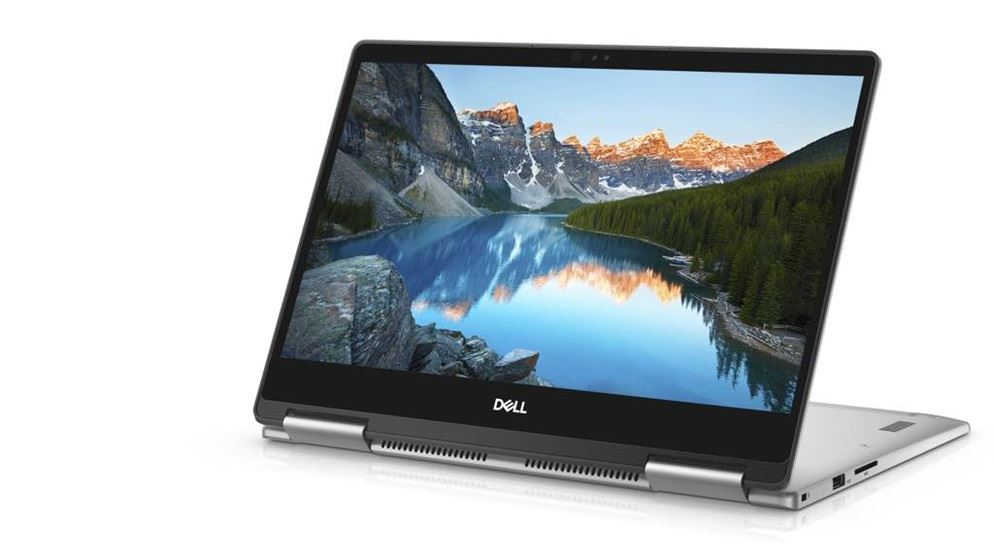 Dell's latest Inspiron 7000 2-in-1 series aims to provide the latest processor and features of a premium laptop and the versatility of tablet, but at a value-for-money price. The Inspiron 7000 2-in-1 comes in both 15-inch and 13-inch versions. We took a hands-on look at the 13-inch model courtesy of Dell to see what it has to offer.

The 13-inch Inspiron 7000 2-in-1 comes with a speed boost from the inclusion of Intel's latest 8th generation processor and is designed as a multimedia machine. The Full-HD (1920 x 1080 pixel) glossy touchscreen display folds back 360 degrees for use as a tablet. A Dell Active Pen is supplied for drawing, writing and note taking. It also has voice control and Windows Hello facial recognition (which worked perfectly in our testing, even in low light).

The keyboard has good sized (14mm) keys that are well-spaced and easy to hit, with ample travel (the distance the key has to make to be recognised) and a snappy response. They aren't loud and there are no keys in awkward positions. You get some space between the left and right arrow keys, which is welcome, and the primary purpose of the F-keys (function keys) is to change settings such as volume and brightness.

The touchpad is smooth, relatively large and we found its tracking accurate during our tests. It supports all common Windows 10 gestures. The screen seems quite large, due to the thin screen surrounds and the IPS (in-plane switching) panel provides excellent viewing angles and vibrant colour. Our only quibble is the blacks are sometimes a bit overpowering, which can hide fine details in dark areas. We noticed this primarily in the video playback test. Furthermore, as it's a glossy screen, you will have to put up with the sort of reflections, including the screen surround, that are common with such screens.

The Inspiron 13 7000 2-in-1 didn't get overly hot during our testing, but if you're using it on your lap beware of running CPU-intensive tasks for prolonged periods. There's a large vent on the bottom, which, if blocked, could see the unit heating up considerably. It's best to use this laptop on a hard, flat surface. Vents on the spine extract the warm air from the fan, which didn't make obvious noise during a 30-minute full-HD YouTube streaming session, but was noticeable during extended full CPU loads.

The 360-degree hinges let the screen rotate all the way around to convert from laptop to tablet mode (unlike the non-2-in-1 version, which still opens out a creditable 180 degrees to lay flat on the desk). Writing and drawing with the included Dell Active Pen stylus is fluid and responsive, and the accuracy of handwriting recognition is high. There's a handy delete button on the pencil. Drawing programs are a bit of a different story, with some delay noticeable when using Paint 3D, for example.

The downside of a 2-in-1 is having all that laptop attached, which makes it feel a bit too heavy to use as a traditional tablet. You can't just hold it in one hand comfortably – it's much better to rest it on a table or a slanted surface if you want to take notes or draw for more than a few minutes. For video, rest it in stand or tent mode, rather than holding it.

Build quality overall is good but we found that when opened 360 degrees in tablet mode, the hinges don't provide full closure between the screen and underside of the base, with a tiny gap in the top-right corner. When you tap this part of the screen, you can hear the screen hit the base, which can be a bit annoying.

Despite being fairly thin, the Inspiron 13 7000 2-in-1 has useful connections in the base: full-sized HDMI, two full-sized USB 3.0 ports, a USB-C port, and a full-sized SD card slot. No adapters are supplied for the USB-C port, but we tested it with a J5Create USB-C hub that has HDMI, USB 3.0, and Gigabit Ethernet connections. You could, for example, use the USB-C port to attach another monitor, and with the HDMI port already built in, use the laptop with an extra screen.

The USB-C port also supports charging, plus the laptop also has a power port on the left side and comes with a power supply (charger), though the plug sticks straight out quite a bit from the laptop body. A compact 90-degree angled power connection would have been preferable.

The relatively short battery life of the Inspiron 13 7000 2-in-1 lets it down somewhat. We found it lasted just 3hr 53min on average in our heavy usage test, and 7hr 15min in our light usage test. The 38 Watt-hour battery is relatively small, even compared to a thin laptop such as the HP Spectre, which has a 43 Watt-hour battery installed, giving us 4hr 55min in heavy usage and 11hr 46min in light usage.

The Dell Inspiron 13 7000 2-in-1 is a compact, versatile and stylish value package. It includes a fast latest-generation processor, high-quality IPS screen and a good range of built-in ports considering it's meant to be a slim, tablet-style laptop. It comes bundled with a lot of pre-installed software, which takes up much of the storage space, so be prepared to do some clean-up work to get rid of what you don't need. The main disappointment was the relatively short battery life achieved in our tests, so keep that charger handy for extensive on-the-go work. If you want a 4K display you need to go for the 15-inch model.