Apple's smallest Mac is back with a long-awaited upgrade that makes it a mighty compact desktop machine.

Mini to the max

It's been four years since the Mac Mini has received a major revamp, and it doesn't disappoint. We tried out the entry-level model courtesy of Apple to see how it has improved, and found it packs huge potential.

It's a very capable little workhorse that's easily portable (and stackable) without the compromises that come with a laptop computer.

It has four Thunderbolt 3 connections, two USB 3 ports, 4K-capable HDMI 2 video and gigabit ethernet. There's also the option of 10-gigabit ethernet for an extra $160 which, when used with a suitable router, can theoretically supply network transfer rates over 1GBps (gigabyte per second).

Should you buy more memory?

As usual, add as much RAM as you can afford to start with (it takes up to 64GB but there are only two slots and it's a trip to a dealer to upgrade). But you don't have to go overboard on internal storage initially if you don't want to.

In addition to whatever amount of internal storage you specify, you can later add heaps of super-fast capacity by plugging in external SSDs via the Thunderbolt 3 ports. And for serious professional processing speed you can attach an external GPU via the same method.

Apple says the new all-flash PCIe-based storage is up to four times faster and our tests turned in impressive results, with 2.5GBps read speed and 626MBps (megabytes per second) for writing data.

The internal cooling has been redesigned to double airflow for the heftier processors and we found the fan runs quietly, even under heavy processor load.

The revamped Mac Mini represents a big step up in performance for its size, going from the previous dual-core to a much more potent 4-core or 6-core processing unit and despite its diminutive size it has enormous potential. 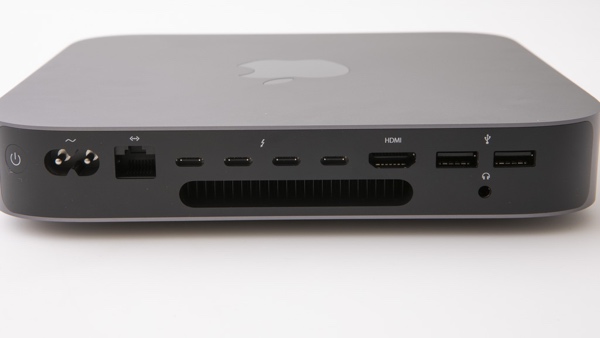 The Mac Mini is ideal if you have limited desktop space, though some cable management will be required if you connect up all the ports. You'll need to supply your own keyboard, mouse, and display.

You can hook up a 5K display or, if you're really keen, you could even hook up three displays – one via the HDMI 2 port, and two 4K displays through the Thunderbolt 3 ports.

To minimise cable clutter, you could opt for wireless – it has Bluetooth 5.0, or you could plug in a USB-based transceiver, and also take advantage of the built-in 802.11ac Wi-Fi adapter which produced good transfer speeds of 38KBps (kilobytes per second) in our transfer tests.