Fires caused by smartphones have led to plane seats being redesigned. 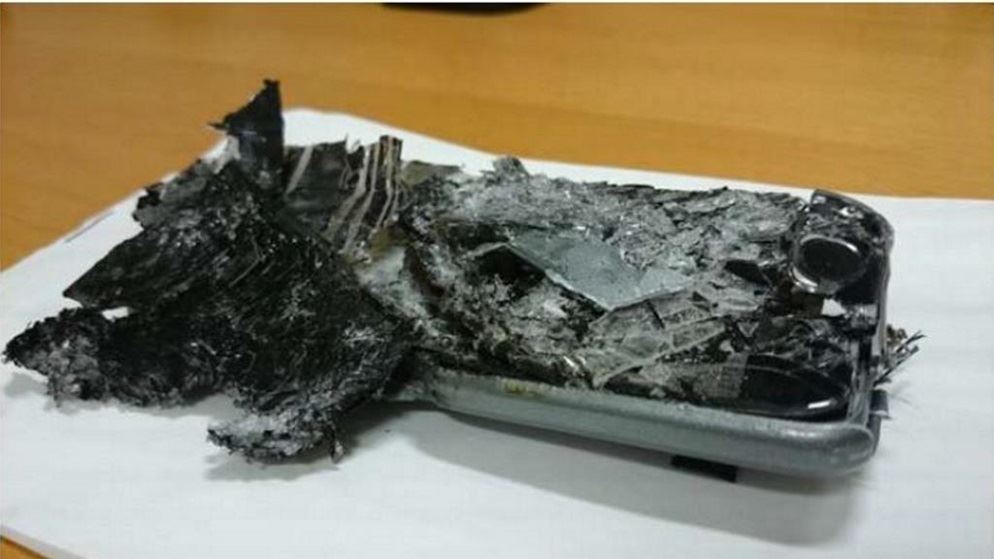 Remarkably, the number of occurrences sparked by lithium-ion batteries – the kind powering smartphones, tablets, laptops and more – does not appear to be increasing. At least 17 incidents were recorded in 2016, a noteworthy drop compared to the 37 recorded in 2014; perhaps owed to the redesign of components in aeroplane cabins (see below).

The ATSB downplayed the frequency of in-flight events involving burning batteries, but recognised the potential dangers.

"Three were serious incidents," a spokesperson told CHOICE. "Each serious incident carries a risk of fire during a flight." Six other cases considered less than serious "led to smoke or fire or fumes".

These are Australian statistics and do not include those that happen on foreign airplanes, including the case where a headphone battery exploded, leaving a woman's face, hands and clothing burned.

A crewmember was assigned to watch the seat for the remainder of the flight, readied with a fire extinguisher.

Lithium-ion batteries are "capable of ignition and subsequent explosion due to overheating", says a report by the US Federal Aviation Administration (FAA). Batteries that overheat can lead to thermal runaway, a chemical reaction that results in the repeated flaring and releasing of chemical electrolyte.

Smartphone batteries tend to be the most common cause of in-flight occurrences. The Australian Civil Aviation Safety Authority (CASA) has awarded smartphones the unflattering title of the "least wanted dangerous good" to be brought on flights.

All mainstream smartphones are powered by lithium-ion batteries; a fact now commonly known following the widespread recall of the Samsung Galaxy Note7, which is banned on flights. Manufacturers gravitate towards the technology because it's efficient, allowing a lot of energy storage to be condensed into a small space.

Of 39 reports of smartphones being lost or damaged on aeroplanes, nine required emergency procedures, according to 2016 data from CASA.

"An increasing number of passengers accidentally [crush] their phone in the reclining mechanism of their aircraft seat," said Shane Carmody, the director of aviation safety at CASA, in a briefing late last year.

"This can result in the damaged smartphone battery going into thermal runaway, possibly igniting a fire."

Such was the case on a Qantas flight travelling between US cities in June 2016, when what appeared to be a late-generation iPhone fell between and was crushed by the mechanics of a first-class seat.

"When the cabin crewmembers carrying fire extinguishers arrived at seat 3A, they observed an orange glow emanating from the seat.

"A crewmember discharged a fire extinguisher into the seat, extinguishing the glow."

Standard procedure is to immediately dunk the lithium-ion device in water, but in the case of flight QF11, the phone was wedged and couldn't be safely handled "without further damage and risk of fire".

A crewmember was assigned to watch the seat for the remainder of the flight, readied with a fire extinguisher.

Airlines have reviewed the designs of seats to ensure phones don't end up wedged beneath.

"About 10-15 minutes after the incident," the report continues, "this crewmember identified further heat coming from the crushed PED. They again discharged the fire extinguisher...eliminating the heat."

Of the 22 similar occurrences, this was the first event to result in a fire.

Airlines have tried to curb the number of these incidents. CASA says airlines have reviewed the designs of seats to ensure phones – and other lithium-ion powered electronics – don't end up wedged beneath. Pre-flight safety videos now prompt passengers to call a crew member when they drop their phone and warn not to move their seats.

Smartphones may be the most common devices powered by lithium-ion batteries, but they join almost any consumer electronic packing a battery.

Portable batteries and spare lithium ion batteries (similar to those powering laptops and drones) were placed second on CASA's list of least wanted dangerous goods to be brought on aeroplanes, while hoverboards – a product widely recalled because its lithium-ion batteries sparked a string of house fires – rounds out the top three.

These lithium-ion powered electronics were considered a greater flight risk than compressed oxygen, power tools with engines (such as a chainsaw and whipper snipper), gas cylinders, paint, fireworks, lighters and matches.