You can't judge a book by its cover – what about food by its label? 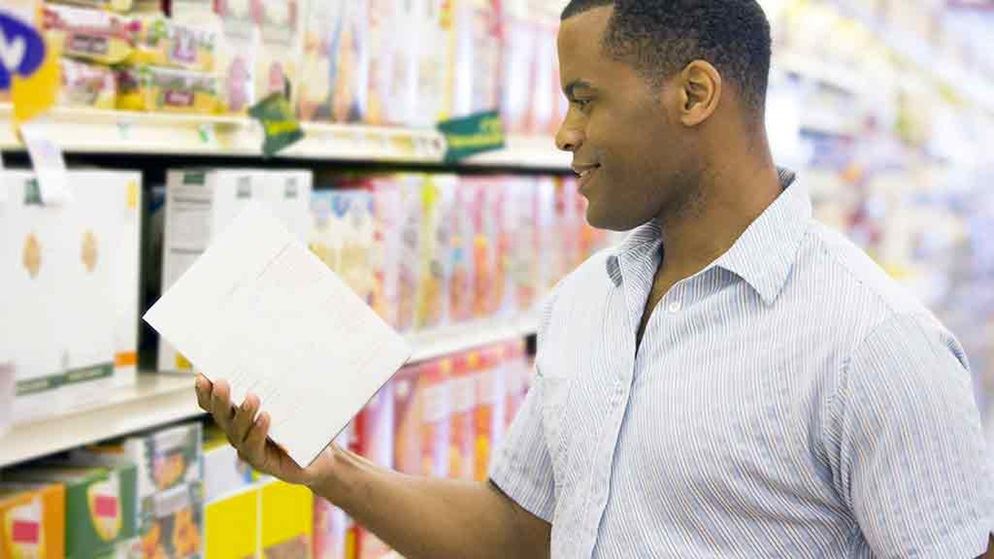 What can you tell by looking at a food label?

Trying to understand the labels on food can be a minefield of confusion and misinformation. Labelling legislation tries to make things a little clearer, but not all food manufacturers follow the rules, and they aren't always enforced.

We help you understand what a food label is really telling you and which crafty labelling tricks to watch out for.

What's on a label?

Most foods are required to have the following information on their label:

• The food's official name (called a prescribed name) or a description if there's no official name.
• The supplier's Australian or New Zealand contact name and address.
• The country of origin.
• Date marking (such as use by and best before) and a way of identifying the production lot.
• An ingredients list including the percentages of key ingredients – called characterising ingredients.
• A nutrition information panel.
• Quantity information, including net weight and serve size.
• Directions on how to store the food in order to remain safe.
• All the information needed on a label has to be in English, distinct, easy to read, prominent, with colours that contrast with the background, and appropriately placed.
Health Star Ratings and nutrition content claims, while both voluntary, are also key features on food labels.

Some foods must also include certain warning and advisory statements or declarations, such as foods containing genetically-modified ingredients or certain allergens.

There are only some foods that don't need a label, such as foods packaged in front of you, or those made and packaged where they're sold, e.g. prepackaged sandwiches in a sandwich bar.

Food labels must identify the country in which the food was made or produced. It's a mandatory requirement of the Food Standards Code, independent of the Trade Practices Act country of origin requirements.


Seems straightforward enough. However, decoding country of origin labels is far from it. Most consumers will be familiar with labels that say things like "Made in Australia from local and  imported ingredients." But which ingredients, from where, and how much? Our 2012 survey revealed that consumers are confused by the claims.

Here are the country of origin claims you might see in the supermarket:

CHOICE thinks labelling can, and should, be more honest and we are calling on the government for reforms that will simplify country of origin claims.

Update: On 21 July 2015, the government unveiled the chosen designs for a new, more detailed labelling scheme – see our updated story for more info.

Use-by and best-before dates have strict definitions: Some foods, such as bread, can use a "baked on" or "baked for" date instead of a best-before date (the baked-for date can't be more than 12 hours after the bread is baked). This system is far more helpful for bread, because a best-before date gives no indication when the bread was baked and how fresh it is.

Date marking or a batch code is a way of identifying where and at what time the food was prepared or packaged. This information is vital if a product needs to be recalled.

The ingredients list is your main guide to what's in a food. Ingredients must be listed in descending order (greatest to smallest) by weight, including any added water.

The list should also include the percentage of characterising ingredients. These are the ingredients mentioned in the name of the product or highlighted on the label in the form of words, pictures or graphics, or which are essential to characterise a food — for example, milk fat in ice cream or cocoa solids in chocolate.

When certain allergens are used as an ingredient in a food, they must be identified on packaging (mandatory allergen labels). These allergens include peanuts, tree nuts, milk, eggs, sesame seeds, fish, shellfish, soy and cereals containing gluten (wheat, rye, barley, oats and spelt).

However, "may contain" warnings are placed on packaging voluntarily by manufacturers to advise that there may be accidental cross-contamination of the food by allergens during processing of the food (voluntary advisory labels). For example, a chocolate bar may not contain nuts, but if made in a factory that makes other foods with nuts, there’s a risk that tiny traces or even a fragment of nut may contaminate the bar. As there is no standard wording, font or style specified, manufacturers use whatever wording they like - making the huge variety of so-called precautionary warnings confusing for consumers.

All foods should have a nutrition information panel (NIP). It tells you the quantity of various nutrients a food contains per serve, as well as per 100g or mL.

You can use the per 100g or mL information to compare the nutrients in similar food products.

To see how much of a nutrient, or how many kilojoules you will actually eat, refer to the per serve column. But check whether your portion size is the same as the serve size - your idea of a serve may not be the same as a manufacturer's, for example, a 200g tub of yoghurt can list a serving size as 100g, but most people would eat the whole lot in one go, and one manufacturer's serving size might differ from another.

The Health Star Rating (HSR) system is a voluntary scheme developed by consumer, health and food industry groups in a government-led process and signed off by food and health ministers from the federal, state and territory governments in June.

Participating companies apply a rating between ½ star and five stars to the front of food products, assisting consumers to make informed food purchases and healthier eating choices at a glance.

The HSR system is based on an algorithm that awards a star rating based on the quantity of specific food components within the product. It takes into account energy, saturated fat, sodium and total sugars for its baseline points (these being the four aspects of a food associated with increasing the risk factors for chronic disease), with the ability to obtain modifying points for certain positive aspects of a food such as fruit, vegetable, nut and legume content and, in some instances, dietary fibre, protein and calcium content.

CHOICE's Health Star Ratings campaign is actively calling on all food companies to embrace the HSR system, roll it out across their entire product ranges, and implement the scheme properly. This means adhering to the style guide so that label information is consistent and consumers can readily discriminate between foods in the same food category and compare foods across different food categories.

Australian packaged food products are required to display quantity information – the amount of food in the package, or net weight - on the front of pack.

If you buy a canned product, bear in mind that the net weight equals everything including liquid. For some foods, like tinned tomatoes, you may not mind the juice, but when it comes to tinned salmon, for example, it can be a costly problem and checking the ingredients list for the percentage of the ingredient you're interested in may be more revealing

The serving size (in g or mL) and number of serves per package is provided alongside the the NIP.

What's in a name?

Some foods have a name that's prescribed by law, such as ice cream and bread, and often this name alone is enough for you to figure out what the food is. Where the manufacturer can choose the name of its food, it needs to be accurate and can't be misleading. For example, a pie labelled "beef pie" must have more beef than any other meat, while a "meat pie" could contain a range of different meats. However, you'll often find examples of misleading names, so read the ingredients list carefully.

Like names, pictures mustn't mislead. So, for example, a fruit drink should not entice you with a picture of real fruit if it only contains fruit flavours. Unfortunately, when it comes to regulation none of the regulatory bodies seem to feel they own this one. The food regulator, Food Standards Australia New Zealand (FSANZ), no longer includes this in its regulations and says it falls within the trade practices regulations of "false and misleading".  Unfortunately breaches usually go unaddressed.

In 2013, a new standard was introduced to regulate nutrient claims and health claims on food labels.

Health claims refer to a relationship between a food and health rather than a statement of content. There are two types of health claims:

All health claims are required to be supported by scientific evidence and will only be permitted on foods that meet certain nutrient criteria, as determined by a nutrient profiling scoring calculator. For example, health claims will not be allowed on foods high in saturated fat, sugar or salt.

The state and territory health departments are responsible for enforcing food laws. Both the Food Regulations and the Commonwealth Trade Practices Act - administered by the Australian Competition and Consumer Commission (ACCC) - prohibit false and misleading information.

So you'd think this would be a safety net for the consumer, but in reality nothing much is ever done about misleading food labelling. State health departments are responsible for enforcing food standards, but they're under-resourced, so labelling issues tend to take a back seat to problems that risk public health and safety.

To deal adequately with misleading and deceptive labelling, more resources must be devoted to food inspection bodies.

The ACCC has relatively limited resources as well. It sometimes deals with the most blatant breaches and in recent years has taken on manufacturers telling porkies about the fruit content of their products, but in general it's difficult to get the ACCC to deal with small case-by-case labelling problems. Without adequate resources for proper enforcement at both the state and national level, any food labelling regulations will have little impact.

A list of the contacts dealing with enforcement of the Food Standards Code in each state and territory can be found here.

Don't get caught — what you think the label should mean and what it actually means could be two different things. Here are some tips on things to look out for.

If you're keeping an eye out for sugar, fat and salt, they can go incognito in the ingredients list. A sugar by any other name will taste just as sweet – and contain just as many calories. Look out for the following food euphemisms: