CHOICE's efforts to get airlines to 'ditch the ticks' pays off. 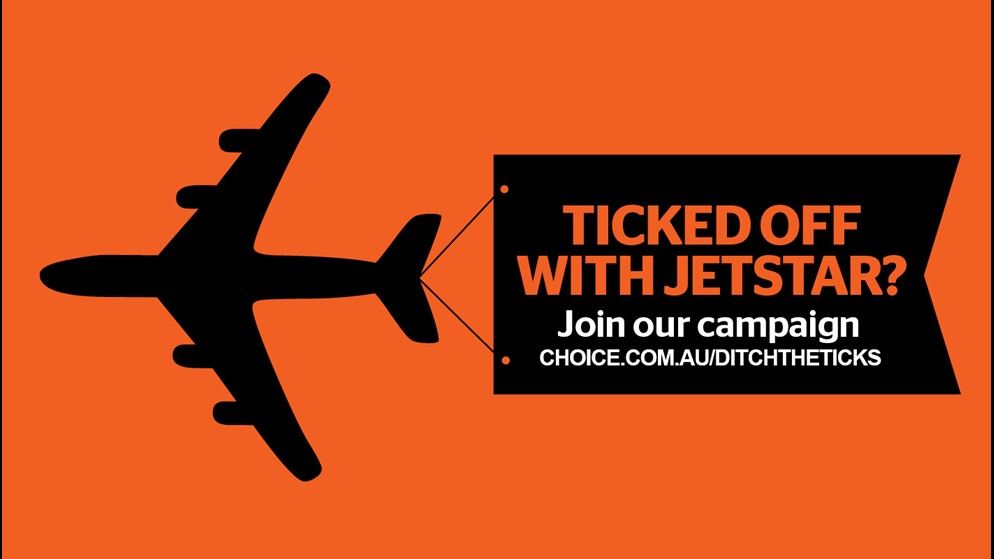 Ticked off with sneaky costs

UPDATED: Jetstar delays its start to ditching the ticks

UPDATED: Tigerair falls in line and ditches the ticks!

UPDATED: Jetstar responds to our Ditch the Ticks campaign

You're thinking about booking a last minute getaway. You've found a great deal online, you've selected your flights, but all of a sudden you find the cost isn't what you thought it was – in fact it's much more expensive! You've probably been a victim of the airline's sneaky pre-selected optional extras.

Thanks to pressure from CHOICE and the ACCC, this practice is all but stamped out in Australia. The last of the offending airlines and – in our opinion – the worst offender, was Jetstar, and even they've now pledged to ditch pre-selected extras. But you'll still need to be on the alert for hidden extra costs until mid-next year, as the airline says it won't be making those changes until July 2017.

When we first began campaigning on this issue Jetstar, Tiger and Virgin airlines displayed several optional services during the online booking process – many of them pre-ticked. These included travel insurance, luggage fees, seat selection and even charity donations. If the customer didn't notice these extras or forgot to manually uncheck the boxes during booking, the airlines added the costs to the final fare. It's particularly a problem if you're booking in a hurry, or if English isn't your first language.

In our comparison (see table below) we found that Jetstar was the worst offender, with pre-selected optional extras adding 40% to a return fare from Sydney to the Gold Coast over the Australia Day break in 2016.

We didn't think the airlines should be selecting these extras for you, and that customers are able to decide what optional extras they'd like without having them pre-selected.

* Return trip from Sydney to Gold Coast, departing January 23 and returning January 26 2016. Lowest cost ticket for each airline selected. Reviewed on January 13 2016 between 9:30am and 10:30am. Preselected optional extras left ticked. If the option had no preselection provided, then none was selected. We've not included the booking fee in the final price as some consumers can avoid the cost and it's not an automatically added extra, although CHOICE recognises that the majority of travellers pay by credit card when booking flights.

In 2013, we looked into common airline website booking traps. In November 2015 the ACCC took Jetstar and Virgin Australia to the Federal Court over their online booking tricks, ultimately finding that both airlines had engaged in illegal drip-pricing practices.

Months later Jetstar, Tiger and Virgin were still engaging in practices that could trick their customers into paying more than they need to.

CHOICE and New Zealand consumer advocate Consumer NZ called on Jetstar to end the dodgy ticketing practices. They finally provided a response to our campaign, but they continued to ignore our requests to meet to discuss a solution:

We've noticed that you have taken aim at Jetstar, calling us the 'worst offender' in relation to pre-selected products when customers purchase airfares.

It is puzzling that you have labelled Jetstar the 'worst offender' as the example you have chosen to highlight shows that it's at least $43 cheaper to fly with us than Tiger and Virgin.

Jetstar customers are very savvy and know how to find a bargain.

We are proud to not only offer incredibly great value fares, but also choice for customers who want to bring an additional bag or to choose a particular seat when they fly with us.

You would think a lobby group who goes by the name Choice would welcome the choice that we provide our customers and the approximately 20 per cent reduction in domestic fares across Australia since we started flying.

We thought Jetstar had completely missed the point. A great bargain on a flight is excellent for consumers, but saddling that bargain with sky-high pre-ticked optional extra costs is unfair and downright sneaky.

In 2016, the offending airlines began to have a "change of heart" – after a strong campaign by CHOICE and some intervention from the regulator.

Jetstar agreed to ditch the ticks in New Zealand after being given court enforceable undertakings to end its sneaky pre-ticked optional extras.

"Consumers are perfectly capable of deciding for themselves whether they want to pay for additional products or services. They do not need companies to make unsolicited purchasing decisions for them."

Following pressure from CHOICE and discussions with the ACCC, Virgin Australia announced on 1 December 2016 that it had ended the practice of pre-selecting travel insurance on its online ticket booking system.

Rod Sims, ACCC Chair, responded to the decision saying, "There are better ways for airlines to highlight the availability of these extras to consumers."

CHOICE welcomed Tigerair's decision on 2 December 2016 to join Virgin Australia in immediately getting rid of the pre-selected ticks for travel insurance and checked baggage on its online ticket booking system.

Hot on the heels of Virgin's decision, and under pressure from CHOICE and the ACCC, Jetstar announced on 2 December 2016 that it too will stop the practice of preselecting extras on online ticket sales – but not until July 2017.

Tom Godfrey, CHOICE spokesperson said, "Jetstar's decision to delay the removal of the tick box tax until July 2017 is unacceptable. Given Jetstar has already removed the preselection of extras in New Zealand, and Virgin and Tiger have done the right thing in Australia, the airline's seven-month delay is bad news for customers."

"If a company needs to use sneaky tactics to trick their customers into purchasing optional extras they may not want or need, it's time to rethink their business model."

Look beyond the airline's travel insurance

Jetstar preselects travel insurance for you when booking a domestic flight, but the booking screen times out, giving you only 10 minutes to read the 6500-word terms and conditions statement for the policy – where'll you find there's no cover for:

Save by taking carry-on luggage only

Cut down the extra costs on checking in luggage by travelling light and packing smart. If you're headed away for the weekend, or even just a week, you might be able to get away with taking carry-on baggage only. If you're travelling with Tiger or Jetstar it could save you up to $39 on a return flight.