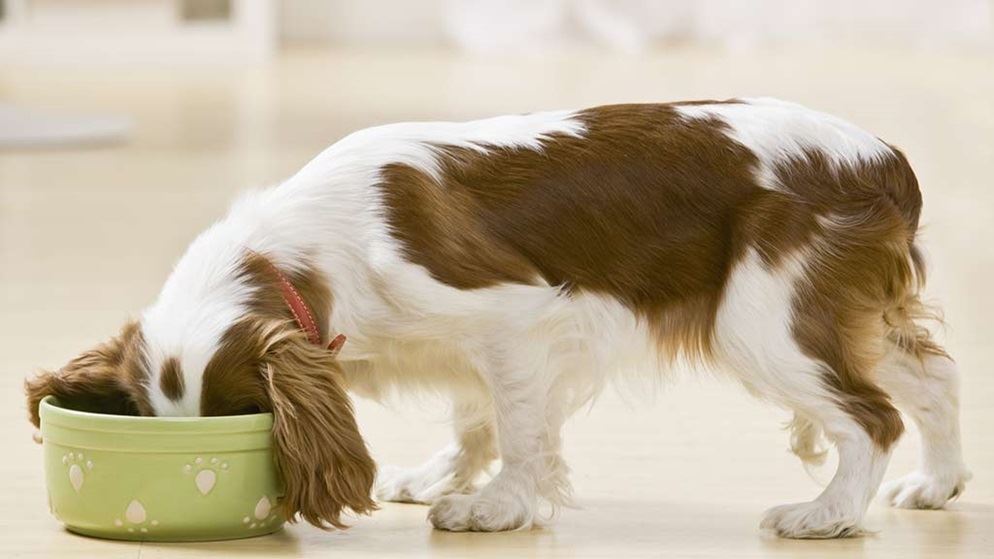 When Nina Waltman switched from Advance to Royal Canin dog food she thought she was doing the right thing for her eight-year-old Maltese Shih Tzu, Bella.

But when Bella fell ill a couple of weeks later, it prompted the family to take a closer look at the new diet.

Advance Dermocare dog food was pulled off the shelves in March 2018 after being linked to at least 100 cases of megaesophagus, a lifelong condition causing enlargement of the oesophagus and affecting eating and digestion. So far, 17 of the cases have proven fatal in Australia.

Nina had been feeding Bella an Advance product line that wasn't recalled, but she switched to Royal Canin Medium Adult 7-plus, one of the more expensive brands on the market, to play it safe. (Both brands are owned by US-based Mars Petcare, the biggest pet food company in the world by far with about $17.2 billion in annual revenue.) 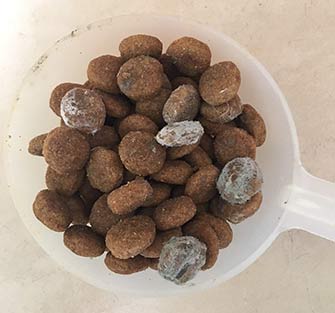 A couple of weeks after Bella started eating Royal Canin, which is made in France, she fell ill.

"She started shivering uncontrollably and her condition deteriorated really badly," Nina tells CHOICE. "She started moving very slowly and staring at the wall. Really strange behaviour, very lethargic. I thought she'd be okay in time but she was not okay."

Then Nina's daughter discovered something wrong with Bella's new food.

"There was a substantial amount of mould in the food, including a big clump of mould in the bottom of the bag," Nina says. She hadn't been in the habit of inspecting Bella's dinner after pouring it into her bowl.

The discovery was made on 3 September 2018 after Bella had been eating the mouldy food for two weeks. The Royal Canin dog food's expiration date was 31 January 2019.

Bella wasn't coughing, a symptom of megaesophagus, but she clearly wasn't well.

She started shivering uncontrollably and her condition deteriorated really badly. I thought she'd be okay in time but she was not okay

The vet told Nina that the mouldy pet food was a possible cause of Bella's illness, but she couldn't be sure because there was no test available to confirm it.

"She was in great health before she started eating the Royal Canin food," Nina says. "And when she stopped she gradually got better. But it took a long time and I'm worried there will continue to be health problems."

Whether the Royal Canin product can be linked to the high toxicity readings or the rapid decline in Bella's health remains uncertain, but Nina's experience in trying to report the mould issue to Melbourne-based Royal Canin Australia certainly fell well short of satisfactory in her view.

Nina reported the issue to the Melbourne office on 3 September. "The customer service person was very blasé. No apology, no nothing," Nina says. "She said someone would be in touch, but no one contacted me. I had to keep on calling them." 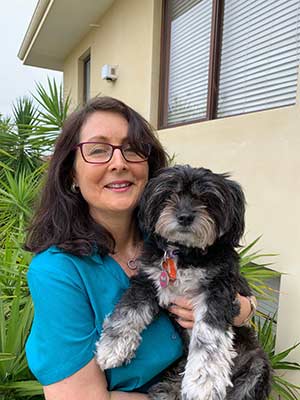 Nina's dog Bella is on the mend now, but Nina's worried that her health problems will be ongoing

She returned the product to the store on the same day. Nina's understanding was the store then sent the sample along to Royal Canin Australia's Melbourne office shortly after that.

It wasn't until 11 October that Nina received an email from Royal Canin saying it had found "elevated moisture levels" in the sample following testing in France.

She requested a copy of the lab report but never received one. And she asked that Royal Canin send the sample to the CSRIO for independent testing and provide her with the report. That didn't happen either.

It didn't help that Royal Canin's claims that it was in regular contact with Nina's vet from early on were shaky, since Nina's vet and Royal Canin's in-house vet didn't actually speak until at least six weeks after she reported the mould, according to Nina. The company had merely attempted to get in touch prior to that.

With the company's story failing to add up, Nina questioned the credibility of its version of events.

The NDA came from a vet who worked for Royal Canin Australia. Nina refused the offer. She says it came nearly a month after she first brought the issue to Royal Canin's attention and only after she proposed to go public and warn other dog owners about the mould problem.

No warning, no recall

What Nina really wanted was for Royal Canin Australia to investigate the issue locally and issue a recall if it had potentially dangerous products on the shelves, but Royal Canin didn't respond to this point when she repeatedly brought it up.

"Almost two months have passed since I reported the excessive mould found in your product and you've done nothing to protect other dogs from being poisoned," Nina wrote in one email, echoing a point that she'd made repeatedly. "It is impossible that the bag I purchased is the only bag infected. What has Royal Canin done about checking all the bags of dog food on the shelf next to the bag I purchased for mould?"

Royal Canin does not dispute that there was mould in the dog food Nina bought, but it stops short of accepting responsibility for Bella's health problems.

"As soon as we were made aware that mould was found in our product, we began investigating the issue," Royal Canin Australia Corporate Affairs Director Kelly Quirke tells CHOICE. "This involved speaking with the treating veterinary clinic and keeping in regular contact with the pet owner, as well as collecting a sample of the product for testing."

The French manufacturer keeps a sample from each batch that's exported overseas so that it can check it for quality and safety "if necessary", Quirke says.

Analysis by an independent laboratory did not detect mycotoxins that are known to be harmful to pets: Royal Canin

"We performed an analysis in our laboratory [in France] on our retained batch sample, and testing on the sample collected from the pet owner [Nina]. The findings were that the retained batch sample was normal and the kibble provided by the pet owner contained traces of mould. Analysis by an independent laboratory did not detect mycotoxins that are known to be harmful to pets. Just like human food, pet food is susceptible to mould formation in warm, humid conditions."

The findings suggest that the product may be in good condition before it's exported from France, but can go mouldy well before its expiration date while being transported to or sitting on the shelves of stores in Australia.

Which is surprising, since Quirke had assured Nina that Royal Canin products "are packed in high technology airtight bags with a controlled atmosphere to protect the kibble from oxidisation and to secure the nutritional quality of the food".

Will Royal Canin Australia be checking its products at pet food retailers for mould, as Nina requested, just in case there are health risks? In an email to Nina on 5 November, Quirke says "we are satisfied that there is no food safety risk to other pets and we will not be undertaking any further analysis of the sample provided".

As for any link between the mouldy dog food and Bella's poor health, Royal Canin says "it is not clear whether the symptoms experienced by Bella were caused by the composition of the kibble".

Nina's concerns about Royal Canin are understandable given the run of pet food incidents in recent times, including the Advance Dermocare recall.

In June this year, a woman reportedly found mould in Applaws Duck and Venison dry dog food which was a long way from its expiration date, and the woman said she knew of at least one case of a dog getting sick from eating Applaws.

And on 7 November is was reported that Australian-made Black Hawk Grain Free Salmon dog food had been pulled from the shelves after a number of dogs became ill after eating it.

(It's worth noting that Sydney-based Black Hawk ceased production and pulled the product in question from the shelves while it investigated. The brand is owned by the EBOS Group, whose animal healthcare division generated $44.7 million in 2016-17.)

These days Nina is making her own pet food.

Nina's main contact at Royal Canin during the two-month process of dealing with the company was a vet himself, and the vet practice where Nina takes Bella sells Royal Canin products.

Such connections have raised concerns among both pet owners and vets about conflicts of interest, since vet practices stand to benefit financially from their commercial relationships with pet food makers and might not want to draw attention to pet food problems. Pet food is a $3 billion a year industry in Australia.

We asked the Australian Veterinary Association (AVA) about the issue, which itself receives about a third of its revenue from sponsorships from the pet care industry including pet food makers.

"Our industry supporters come from a wide spread of industry including insurance, pharmaceutical, animal health to distributers," says AVA President Dr Paula Parker. "All corporate support is clearly identified through badging and labeling. We actively engage with these supporters to ensure that veterinarians have access to the latest innovations and products available and have the opportunity to ask technical questions about new and existing products."

Parker denies that there's any "outside influence" when it comes to the clinical decisions veterinarians make.

In its submission to the recent Pet Food Senate Enquiry, the AVA called for the mandatory application of Australian Standard AS5812 – Manufacturing and Marketing of Pet Food to all pet foods sold in Australia. The standard, which covers a range of items from labeling to ingredients, is now voluntary.

Which pet insurance policy is the best for you and your cat or dog? Our comprehensive pet insurance reviews looks at insurers such as Medibank, Petplan, Guide Dogs, RSPCA and more.