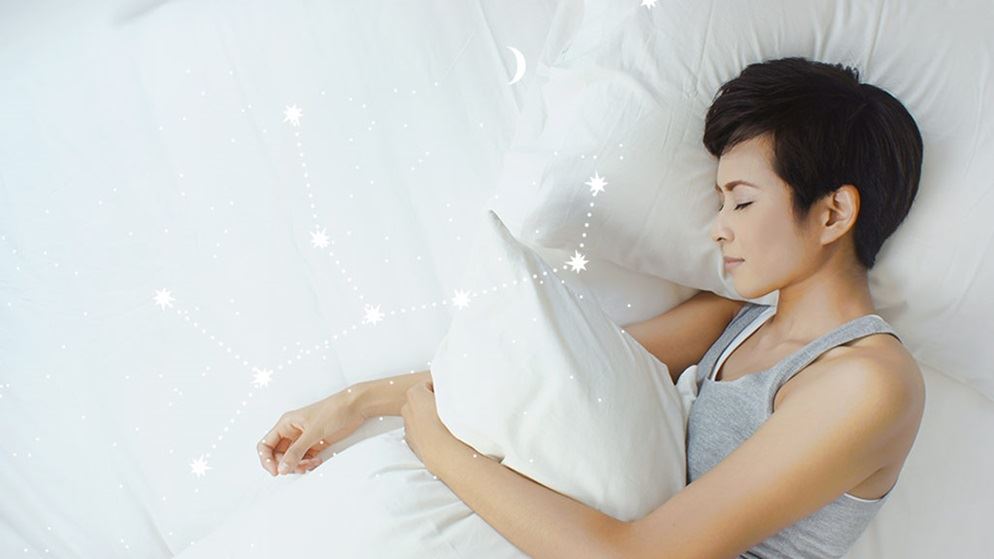 Whether it's down to our 24/7 lifestyles, modern stressors or new technologies, lack of sleep is rapidly becoming a major health issue in Western societies, with up to one-third of Australian adults reporting regular difficulty getting to sleep or staying asleep. The market for products designed to help people monitor and improve their sleep is burgeoning, and includes apps and wearables (the Fitbit and so on) that monitor sleep, alarms that wake you at an 'optimal' time and products designed to relax and calm you.

Fitness trackers have a wealth of features, including sleep tracking. Find our unbiased comparison at fitness tracker reviews.

So we put some of them through their paces in a user trial, asking our volunteers to rate their effectiveness. We tried:

How we trialled sleep products

We recruited volunteers with symptoms of insomnia – problems falling asleep, staying asleep or waking too early – to find out what they thought about a few different products designed to improve sleep.

They were also asked about ease of use, and any problems they had, and finally whether they'd consider buying it. Five or six people tried each device for two weeks.

So did they work? 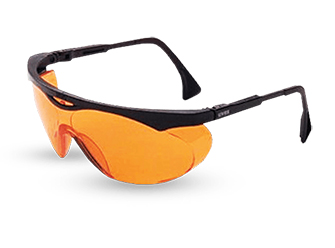 Rationale: Melatonin is a hormone released at night time that helps us sleep, and studies have found that the blue part of the light spectrum interferes with melatonin production and therefore sleep. Blue light is emitted from various electronic devices, including TVs, computer screens, tablets, smart phones, backlit e-readers and some forms of lighting, such as compact fluorescent and LED lighting.

With the popularity of night time electronics potentially contributing to sleep deprivation via blue light, various gadgets have been devised to block or filter the blue light. These include screen shields, glasses and apps or settings designed to turn down blue light on devices.

Claim: "These glasses successfully block over 90% of blue light, allowing you to watch TV, use your computer or smart phone right up to bedtime, yet minimising the awakening effect of the blue light waves that emanate from these devices."

How it works: Wear them for an hour or two before you want to go to bed.

The test: Five people who said they used screens at night tested this, putting them on at least one hour before sleep time.

Results: Some people found the glasses helped them fall asleep faster, while others found they stayed asleep longer. Overall, users said they 'probably' or 'maybe' slept better after using the glasses.

The main complaint was that they were too big and bulky, and kept falling off. The glasses we tested were fitovers, designed to wear over reading or other glasses. The regular ones may fit better and be a better option if you don't wear other glasses. They also distorted colours: "You definitely can't shop online for clothes while using it!"

Verdict: This was the most popular and effective of the products we tested – it's simple to use, not very expensive, and could be worth trying if you use screens at night. 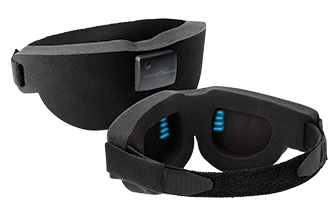 Rationale: Worrying, intrusive thoughts and other manifestations of the "overactive" mind can prevent sleep, and many sleep therapies aim to quiet the mind by encouraging focus on an object, breathing or sounds – much like meditation.

Claim: "Sound Oasis Glo to Sleep therapy mask will help you focus your mind on the process of relaxation and sleep - naturally and effectively... The Glo to Sleep mask rapidly slows the brain's activity level to a deep relaxed state."

How it works: The sleep mask, which blocks light from outside, contains small static blue lights (not strong enough to affect melatonin – see Blue light blockers), and you lie focusing on the blue lights. The lights can be adjusted for brightness and time (they switch off automatically).

The test: Six people tested this, choosing the brightness and time setting as they preferred.

Results: This one really polarised our volunteers! Three hated it so much they couldn't complete the two week trial:

On the other hand, two loved it and found it comfortable and relaxing:

The last triallist was somewhere in between.

Verdict: You might love it or hate it – but it's difficult to know which until you've tried it. 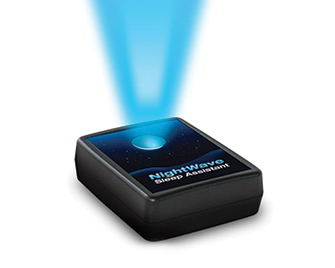 Rationale: Studies have found that deep, slow breathing has been found to reduce heart rate and blood pressure, as well as having other physiological effects that reduce stress and induce relaxation. This can help you fall asleep faster and stay asleep longer.

Claim: "[The NightWave] helps you to relax, clear your mind, and breathe deeply and rhythmically."

How it works:  NightWave projects a blue light (but apparently not strong enough to affect melatonin – see Blue light blockers) on your ceiling which pulses on and off. You breathe in and out in time with the light, which gradually slows down.

The test: Six people tested this, using either the 7-minute or 25-minute program.

Results: Some triallists found it helped a little with falling asleep, but none thought they'd buy it.

And this: "Moths were attracted to the blue light. It's creepy to watch a giant shadow of a moth on the ceiling!"

Verdict: While this could help relax you by controlling your breathing rate, you do need to keep your eyes open – having your eyes closed may be more relaxing for you.

Rationale: This device has a variety of sounds and music to choose from, including white noise, nature sounds and music designed to promote certain brain waves conducive to relaxation and sleep.

There is some clinical evidence to back this up: research has found that nature sounds (such as crickets, surf, rain, bird calls) reduce stress and heart rate and help people with tinnitus to sleep, and the specially designed music has been successfully used to induce sleep in people suffering pain.

The test: Six people tested this, choosing the sounds they liked best and the length of time that suited.

Most people chose the nature sounds, as they didn't particularly like the specially designed sleep music: "Some tones sounded like demos for the Alien soundtrack - not very conducive to sleep!", said one triallist, with another commenting, "Some sounds were very creepy – reminded me of a horror movie." Two did use one of the sleep music tracks ('Sleep Surf'), but it didn't improve the scores they gave.

Verdict: Many found the nature sounds relaxing and pleasant, and a couple thought it helped them fall asleep. But overall there were no improvements in sleep quality, and not much interest in buying it. 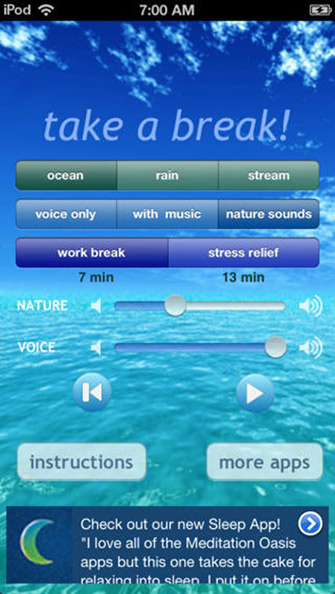 Rationale: Mindfulness is about focusing your awareness on the present moment and noticing sensations, bringing the mind back when it invariably wanders. Mindfulness meditation, whether designed especially for insomnia or just for relaxation or stress reduction, has been found in numerous clinical trials to help people fall asleep faster and sleep better.

Claim: Based on a mindfulness meditation program, this app makes no specific claims about helping people sleep – we included it to see if the relaxation aspect would prove helpful.

The test: Five people tried this app, listening to the 13-minute stress relief program. They could include the background nature sounds or music if they wished.

Results: This app was second only to the blue blocker glasses in terms of helping people sleep better. Not all our triallists liked it, but most found it helped with falling asleep or staying asleep.

"The music was the most relaxing background, but voice over volume should be set low – I found it distracting if set at the same level or greater than the background."

"I found the American voice annoying and would rather listen without the voice."

Verdict: If you have trouble sleeping due to stress, this app may help relax you before going to sleep – or at any time during the day, really. It's free, though paid upgrades including a sleep-specific program are available. 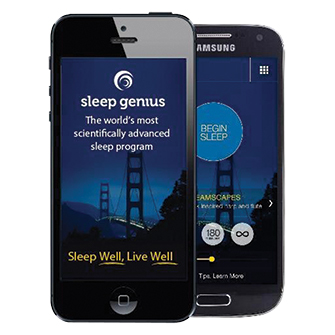 Rationale: This app is based on research designed to help astronauts living on the International Space Station – the noise in the craft, as well as experiencing sunrise or sunset every 45 minutes make sleep very difficult. The app uses a sleep-promoting combination of vibrations, binaural beats (stereo pulses of sound) and calming sounds designed to lower heart and breathing rates.

Claim: "The Sleep Genius Relaxation Program was scientifically­ created to reduce stress and anxiety by calming both the mind and the body. Our acoustically modifi­ed music induces the relaxation response, targeting the cardiac and respiratory systems as it synchronizes brain activity."

How it works: To get the full benefit from the vibrations and binaural beats, the user should wear earphones, which may not be comfortable, or hook their device up to a pair of stereo speakers, which may not be practical in the bedroom.

The test: Five people tried this app. Only one listened to the program in stereo, using earbuds. Others listened directly from the phone speaker or from a single wireless speaker.

Results: The triallist using earbuds reported the most benefit, and thought it helped with sleep and continued using it after the trial. The others reported no benefit, and two commented that it kept them awake.

One who reported no benefit said, "I thought the app was relaxing and could work for some people. I just found it was a bit of a distraction for sleeping."

Verdict: If you can use the app with earbuds or stereo speakers, it's worth trying – especially if you have an Android device and can get the app for free.

What does help you sleep?

Despite having good theories behind them, many of the gadgets didn't help much in giving our triallists longer, better quality sleep. So what can help?