We take the guesswork out of choosing your favourite treats. If chocolate is one of your weekly supermarket essentials (and why wouldn't it be?), make sure you're picking the best block on the ... er, block.

We taste tested 11 plain milk chocolates and 13 plain dark chocolates, all available from the supermarket, with the exception of Haigh's Premium chocolates (included to provide a comparison to a boutique brand). The chocolates range in price from $1.25 to $4 per 100 grams.

Although we found some standout best and worst chocolates, it's also apparent chocolate is a highly personal treat – even our expert chocolate tasters couldn't agree among themselves.

"Nice, strong aroma. Good balance of milk and sweetness. My favourite of the range." – Rebecca

The CHOICE panel also said this had a good balance between sweetness and flavour, was light and fruity with a good chocolate flavour and a creamy, smooth texture with a good melt.;

"Everything you can ask for in a milk chocolate – flavour, sweetness, creamy. Yum." – CHOICE panellist

A good all-rounder that ticks all the boxes for a readily available milk chocolate. But it's also one of the most expensive chocolates we found.

At less than half the price of the Lindt Excellence Extra Creamy Milk Chocolate, this was a close runner-up for the lay panel, with 22% saying it was their favourite. It came in equal third among the experts.

"OK for a mass manufactured chocolate, but little depth of flavour." – Jodie

The CHOICE panel liked this on the whole saying it had a smooth, creamy texture but lacked cocoa flavour and noted that it tasted "commercial".

"This was nice, inoffensive chocolate. It doesn't taste particularly gourmet but it was nice enough." – CHOICE panellist

A standout loser. It ranked as the worst chocolate by both experts and the CHOICE panel with an overwhelming 48% calling it their least favourite. The experts thought this was overly sweet, lacked flavour and aroma and had a grainy texture.

"Good if you are on a diet – it's so awful you'll only eat one piece." – CHOICE panellist

At $9.50 per 100 grams, up to seven times the price of the supermarket chocolates, you'd expect this one to stand out. But it came second last with the CHOICE panel, and the experts didn't rate it too highly either, saying that although it melted well, it had a grainy texture. None of the CHOICE panellists said it was their favourite, and eight per cent said it was their least favourite chocolate.

"Not bad, but not great either." – CHOICE panellist

You can do better for much less.

Best dark chocolate according to the experts

This was the highest-ranking chocolate for the experts, and for the lay panel came in equal third. But only eight per cent chose it as their favourite. The experts said it had good depth of cocoa flavour with a good snap, indicating a high cocoa butter content.

"An interesting dark chocolate with some fruity acidity, but leaves a slightly sticky mouthfeel." – Jodie

The CHOICE panel's response to this chocolate was mixed. Some enjoyed its strong cocoa flavour, while others found it too bitter, with a chemical flavour.

>"Very bitter – for the hardcore chocolate fans only!" – CHOICE panellist

Best dark chocolate as voted by the people

This earned the highest average score from the CHOICE panel, with 14% saying it was their favourite. It ranked equal third with the experts, but their reviews were mixed.

"Thin, good snap. Smooth, good aftertaste. A good bite. One of the best so far." – Tina

CHOICE panellists' responses were mixed, with some saying it was well balanced and pleasant while others called it ordinary and bland, and lacking in chocolate flavour.

If you're a die-hard fan of intense chocolate this probably won't satisfy. But for $2.15 per 100 grams it's good value.

Dark chocolates worth a mention

Aldi's Just Organic Dark Chocolate with 70% cocoa is worth a look, particularly if you like a strong, traditional and bitter-tasting dark chocolate. CHOICE panellists rated this well, with 19% (the highest percentage) saying it was their favourite.

Woolworths Gold Intense Dark Chocolate also didn't scrub up too badly, coming in second with the CHOICE panel and 11% saying it was their favourite. It also came in equal second with the experts.

Green & Black's Dark Chocolate divided the crowd, with some loving it and other hating it. Just over six per cent said it was their favourite, while 16% said it was their least favourite. But the experts rated it highly – it came in equal second with them.

Aldi's Choceur Dark Chocolate was pretty average according to the experts, but it didn't do too badly among the CHOICE panel, with 16% saying it was their favourite.

Experts and lay people agreed this was the worst dark chocolate, with a whopping 52% of panellists saying this was their least favourite. Experts felt the texture was thick, grainy, dry and chalky, with a poor mouthfeel, slow melt and a dull taste.

The crowd was pretty much unanimous in its dislike of this chocolate, describing it as dry, grainy and oily while lacking flavour and being reminiscent of cooking chocolate.

"Like plasticine, but with a bit less flavour." – CHOICE panellist

Not as bad as its higher-cocoa-content counterpart but still not great, with 11% of CHOICE panellists saying it was their least favourite and coming in second last with CHOICE panellists and experts. Experts described it as grainy, sweet and lacking in flavour.

CHOICE panellists described it as bland, with a strange artificial flavour and chemical aftertaste.

"OK, but not super exciting. Something weird, like artificial sweetener going on with the flavour." – CHOICE panellist

Overall cocoa content tells you about the intensity of the chocolate flavour. Cocoa percentage doesn't tell you anything about the quality and type of cacao bean, or the way it's been fermented and dried. Nor does it distinguish the amount of cocoa butter.

The cocoa content (or cocoa solids) claim on a block of chocolate simply refers to everything in the block of chocolate that is derived from the cacao bean. This includes cocoa mass/liquor (ground-up cacao nibs, which contain around 45-55% cocoa butter) as well as any extra cocoa butter added to the chocolate.
CHOICE staff taste testing chocolate.

According to one of our experts, Jodie Van Der Velden, cocoa butter content is a better indication of quality than the overall percentage of cocoa as it's what makes the chocolate melt in your mouth, giving it a luxurious feel.

In other industries such as cosmetics, cocoa butter is a valuable commodity. So many lower-grade chocolates such as compound or cooking chocolate have the cocoa butter extracted and replaced with vegetable oil (usually palm oil) so it can be sold off.

Other factors, such as the raw ingredients used and the way it's made and stored will also affect the quality of the chocolate. 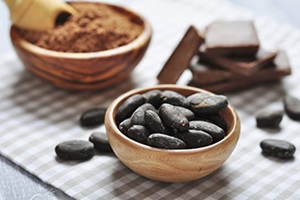 The best quality cacao beans tend to come from South and Central America. Generally, criollo and trinitario beans are better than forestero. While the label won't tell you everything, you can gather some wisdom from it. No single piece of information, such as the region or the cocoa content, determines the quality of chocolate. But a good chocolate should have very few ingredients: