"I tried to quit added sugar for a week"

Tips for spotting added sugar in supermarket food, and how to find low-sugar alternatives. 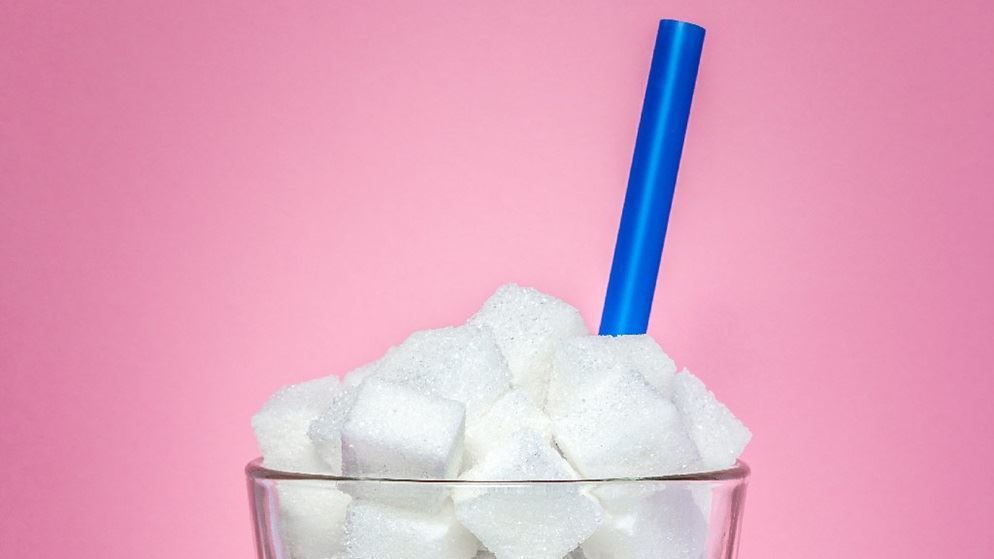 I once went a year without eating anything sweet; not just chocolate and ice cream, but everything sweet – including fruit, wine and even high-sugar vegetables like sweet potato and beetroot.

After the first few weeks my sugar cravings disappeared, my skin cleared and my energy increased. But my dramatic approach was both impractical and unnecessary, so I eventually reintroduced natural sugars into my diet.

Fast forward to earlier this year and excess sugar began dominating my diet once again. I needed to introduce some long-term boundaries to keep my health on track.

This time I knew that natural sugars weren’t my problem, so I decided to try quitting added sugars for a week.

Here's what I found: added sugars are in more supermarket foods than you probably realise.

It's harder than you think to avoid added sugar

I went into this week confident that, with the exception of the confectionery aisle, I wouldn't have to make many alterations to my usual purchases.

But I was surprised to discover many of the ingredients I was used to seeing in my grocery items, like barley malt, dextrose, malt extract and fruit juice concentrate, were added sugars. It was even more unsettling not knowing exactly how much of these added sugars I'd been consuming up until now.

Spotting added sugars in the supermarket

Since it can be difficult to tell if a product contains added sugar, I set off for my weekly shop armed with a printout listing the more than 40 names for sugar. 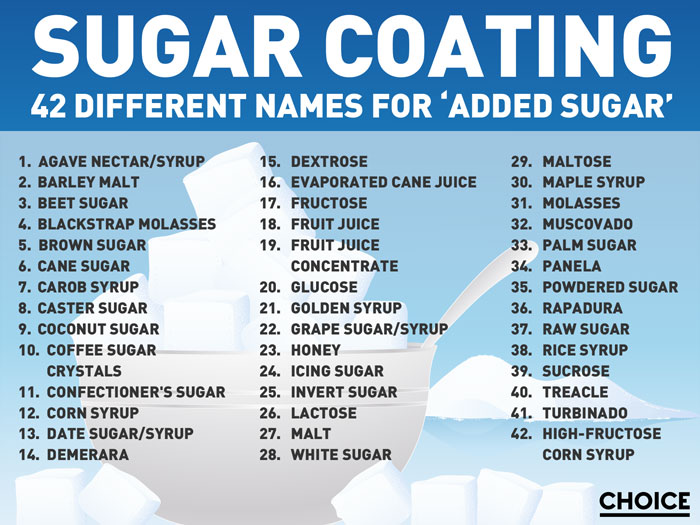 My intense scrutiny of ingredients lists earned me some strange looks, and doubled the time it took to complete my weekly shop, but here's what I learned.

(Note: Ingredients are listed in order of ingoing weight, so if sugar appears toward the beginning of the ingredients list, it is one of the main ingredients in the product.)

I found fruit juice concentrate, a form of added sugar, in a staggering variety of kids' foods – from a frozen Bolognese pasta bake to a snack bar.

The concentrate was often wedged between whole fruits in the ingredients list, making it easy to miss. For example, Calci Fruit Banana, Fig, Apple and Milk baby food from Rafferty's Garden contained banana, fig and milk, but there was no apple in it. Instead, added sugar – under the guise of 'apple juice concentrate' – made up 9% of the product.

When it came to choosing chips and crackers, I had to swap many of my favourite flavours – like salt and vinegar and barbecue – for plain salt when I found sugar in the ingredients list.

One meal even had added sugars in the roast potatoes

But things got more difficult when it came to buying pre-made spice pastes and sauces. While I knew I'd have to steer clear of obviously sweet flavours like honey chicken, I also found added sugar in more savoury options. I ditched my usual laksa paste, Five Tastes' Mild Laksa, when I saw the second ingredient was sugar, and I was unable to find an added-sugar-free alternative to replace it with.

Frozen dinners were also surprisingly sweet – one meal even had added sugars in the roast potatoes.

3. 'Healthy' foods can be high in added sugars

While sweet snack bars were the worst offenders in the health food aisle, I also found lots of added sugar hidden in seemingly healthy organic and gluten-free products.

When the sources of sugar are split up like this, it masks the fact that added sugar (in its many forms) is one of the main ingredients.

4. The drinks aisle is dangerous

With the exception of artificially sweetened drinks, the only drinks I found that were free from added sugar were water or plain milk. Luckily my two favourite beverages, tea and coffee, are naturally sugar free.

As a general rule, the closer a product is to its natural state, the less likely it is to contain added sugars.

Choosing whole or minimally processed foods from the five core food groups outlined in the Australian Dietary Guidelines, like whole fruit, vegetables and legumes, cheese and natural yoghurt, meat and fish and wholegrain foods, made it much easier to avoid added sugars.

Now that my added-sugar-free week is over I'll be reintroducing the odd treat, but many of the alternative foods and drinks I introduced have found a permanent place in my weekly diet.

Here are some of my favourites:

What are added sugars?

According to Steve Flint of Diabetes Victoria, "'Added sugars' is a broad term for the sugar added by manufacturers during processing to improve the taste and texture of foods, or by the consumer at home, such as adding a teaspoon of table sugar to a cup of tea or coffee. The 'free sugars' which are naturally present in honey and fruit juices are also referred to as added sugars, because they tend to be digested quickly and act similarly to added sugars.”

While quitting sugar cold turkey helped break my bad habits in the past, cutting out sugar completely isn't beneficial to health.

According to nutrition expert Dr Rosemary Stanton, there's no evidence that the naturally occurring 'intrinsic sugars' found in fruit, vegetables and milk, have any ill effects on health.

However, there is strong evidence linking overconsumption of added sugars to obesity, type 2 diabetes, and cardiovascular disease. This is why the World Health Organization (WHO) recommends we limit these sugars to a maximum of 5 to 10 teaspoons per day, or the equivalent of 10% of our total daily energy intake.

Why is added sugar so much worse for our health than intrinsic sugar?

As an example, Stanton suggests it would be difficult to sit down and eat five apples, because fruit takes takes time to chew and its dietary fibre makes us feel full.

"But if you extracted the sugar from those apples, you could swallow it as juice in just a few seconds, making it easy to over-consume kilojoules without taking in the nutrients found in whole foods."

Dietitian and Nutritionist Dr Alan Barclay warns that added sugars, along with refined starches like those found in rice crackers and chips, are also bad for our teeth. "Overconsumption of these foods alters the bacteria in our mouths, creating an environment that encourages tooth decay and cavities," he says.

With over half of Australians exceeding the WHO recommendation to limit energy from added sugars to less than 10% of energy intake, reducing added sugars is a good health goal for most of us.

But, as I discovered, knowing which packaged foods have added sugars and which don't is no easy feat.

The nutrition information panel (NIP) displays a food's total sugar content, but doesn't state how much of that comes from sugars that occur naturally in the food, and how much is added. For example, a jar of pasta sauce contains natural sugar from the tomatoes that make up the majority of the product, but it might also contain added sugar to make the sauce sweeter. The only way to know if all the sugar listed in the NIP is from the tomatoes or if some has been added is to read through all the ingredients.

You then also need to be aware that added sugars can go by over 40 different names (including some sneaky ones like turbinado, rapadura and panela), and that they can be scattered throughout the ingredients list.

To help overcome this confusion, other developed countries like the US have introduced labelling laws that require the quantity of added sugars to be listed separately to total sugars. This makes it possible to quickly compare products and determine which one contains the least added sugars.

Unfortunately, Australia doesn't yet have these laws, although the government is currently consulting on improvements to sugar labelling.

Have you tried to quit the sweet stuff? Join the conversation about added sugar at CHOICE Community.