It's supposed to be a health tonic, but where's the evidence for its benefits? 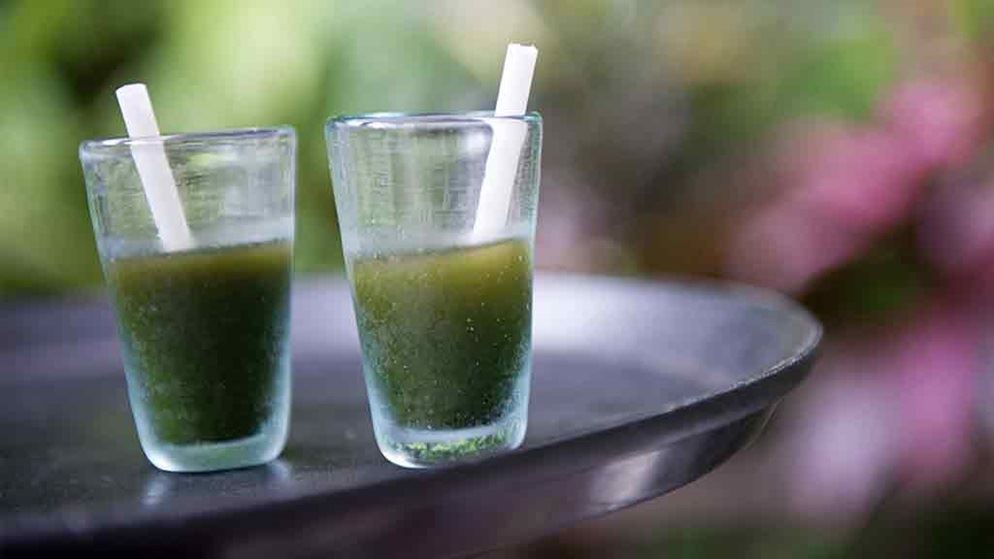 Wheatgrass - a shotglass of health or hype?

If you believe the sales pitch, wheatgrass can nourish the blood and detoxify poisons, purify the liver, rebuild the bloodstream, boost energy and immunity, play a role in keeping teeth and bones strong, melt excess fat in your system, help treat acne and even keep your hair from going grey — and all before breakfast (it's generally recommended you drink wheatgrass juice first thing in the morning on an empty stomach for best effects.)

We searched the medical literature for the evidence on wheatgrass to see which claims, if any, could be substantiated.

Claim: "A shot of wheatgrass juice is nutritionally equivalent to a kilo of fresh green vegies."

It's reported that the origin of this claim dates back to the 1930s when the "father of wheatgrass", Charles F Schnabel, supposedly said "15 pounds of wheatgrass is equivalent to 350 pounds of the choicest vegetables". Certainly wheatgrass has some nutritional value, but not to that extent.

We compared the nutrients in a shot of wheatgrass juice with a similar quantity (about 30g) of cooked spinach and broccoli. Even this small amount of these vegies contains more minerals and vitamins such as calcium, vitamin C and folic acid, than wheatgrass juice. And they contain fibre. Since not everyone likes spinach or broccoli or has the time to cook them, we substituted a garden salad — of a variety and size similar to what you'd get in a fast-food outlet — for comparison, and it blitzed the shot of wheatgrass juice for fibre and a range of nutrients. A whole kilogram of vegies is beyond comparison.

Daily wheatgrass juice doesn't mean you can ignore the recommended five veg and two fruit serves a day. It can contribute a little towards them, sure, but it's not a substitute for fresh fruit and veg.

Claim: "Wheatgrass acts as an anti-inflammatory and has wound-healing properties."

The use of wheatgrass extract has produced clinical observations of the improvement in symptoms and healing in patients with conditions including eczema, fractures, burns, osteoarthritis and skin cancers, to name just a few. These observations are interesting and deserve attention, but it can't be assumed that the improvements were as a direct result of the use of wheatgrass. To support the observations, controlled clinical trials are needed, but only a few have been conducted.

One trial in 2002 of patients with active distal ulcerative colitis — an inflammatory disease of the bowel — found that the severity of some symptoms of the disease was significantly reduced in the group receiving 100ml of wheatgrass juice. The result was compared with those on a placebo, and the conclusion was that it may be an effective treatment for this condition. The results are promising, but the sample size was small — just 21 patients, with only 19 completing the trial — so results can't be generalised.

In a clinical setting, some improvements in symptoms have been seen when a cream containing wheatgrass extract has been used to treat plantar asciitis — an injury affecting the sole of the foot, which becomes painful and tender. But when put to the test in a random, double-blind placebo-controlled trial, the application of wheatgrass cream was found to be no more effective than the placebo.

These claims seem to be based on the presence of chlorophyll, the green pigment in plants that plays the key role in photosynthesis. It makes up more than 70 per cent of the solid content of wheatgrass juice and its molecular structure is a bit like that of haemoglobin, the component of red blood cells that transports oxygen. The theory is that because chlorophyll and haemoglobin are alike in structure, taking wheatgrass juice enhances haemoglobin production. But as far as evidence goes, there's little to be found.

One small pilot study of 16 patients with transfusion-dependent beta thalassaemia (an inherited disease in which red blood cells die easily and regular blood transfusions are required) found that fewer transfusions were required in 50 per cent of patients when wheatgrass juice was taken daily, although in 50 per cent there was no benefit. These observations are interesting, but as the authors themselves point out, the mechanism needs to be proven and additional research carried out before the claims can be properly validated.

Verdict: Inconclusive evidence for prevention – none for cure.

Test tube and animal studies have shown that wheatgrass extract works against gene mutations, but there's no certainty that the same effect would happen in humans.

It was previously thought that this effect was due to wheatgrass containing chlorophyll, but more recently it's been proposed that it's a result of the antioxidant activity of the flavonoids it contains. Flavonoids are a group of naturally occurring compounds found in many fruits and vegetables, and there's evidence that eating fruit and vegetables can help reduce the risk of cancer. But you can't automatically draw the conclusion that drinking wheatgrass juice will also contribute towards this protective effect, as the laboratory studies were performed on an extract of wheatgrass, not wheatgrass juice itself.

There's nothing to substantiate claims that wheatgrass can help "dissolve tumours". This type of claim could be dangerous if someone were to substitute wheatgrass juice for their regular treatment.

Claim: "Wheatgrass gets rid of bad breath and body odour."

Verdict: The evidence isn't for wheatgrass itself – and it's mixed.

Chlorophyll has been claimed to act as a deodoriser and was particularly popular in the 1940s as an aid to reducing the odour from infected surface wounds and ulcers. To this day, plants with high chlorophyll content like parsley and wheatgrass are often recommended as aids to reduce problems such as bad breath and body odour.

In more recent years, just a few studies have been conducted looking at this property of chlorophyll, with mixed results. Some case reports found that chlorophyllin — a derivative of chlorophyll — decreased urinary and faecal odours in incontinent patients. However, a placebo-controlled trial found it to be no more effective than the placebo at reducing faecal odour.

As far as the evidence goes, there's minimal risk to your health from taking wheatgrass juice.

There's a small chance of bacterial contamination from the soil in the tray where it's growing if care isn't taken when it's cut for juicing. But these days a lot of wheatgrass is grown hydroponically (without soil) so this risk is eliminated.

If you have too much, nausea and diarrhoea are potential side effects. But if you've ever had a shot of wheatgrass you'll know that it's an unusual taste, and the chances of over-consuming seem highly unlikely.

All in all, throwing back a shot of wheatgrass juice can make an interesting alternative to your morning espresso and provide a few nutrients along the way, but don't hold your breath for anything more.