Are breakfast drinks a healthy option when you’re eating on the run? CHOICE checks out liquid breakfasts, such as Sanitarium’s Up&Go and more. 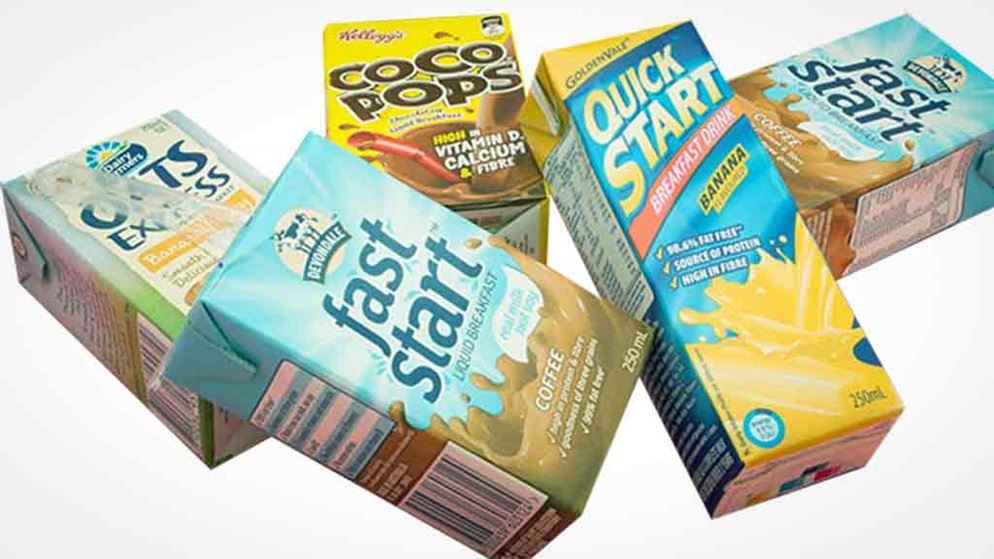 No time for breakfast?

Almost a quarter of Australians say they rarely have time for breakfast, according to research by Roy Morgan. And this is a problem. If you don't eat breakfast you'll probably be hungry mid-morning, and be more tempted by unhealthy snacks (morning muffin, anyone?).

Studies consistently show that if you eat breakfast you're less likely to become overweight, and a nutritious breakfast can help reduce your risk of heart disease and diabetes. Skipping the first meal of the day has also been linked to reduced intake of calcium and dietary fibre.

Tapping into consumers' increasing demand for meals on the go, liquid breakfasts are a growing category in the shopping aisles. Sanitarium's Up&Go has ruled the market since its launch 15 years ago, but other manufacturers have since entered the battle for shelf space.

But are liquid breakfasts as nutritious as they claim? CHOICE reviewed 23 products across six brands, looking at their ingredients, nutrients and sometimes unfounded assertions.

How do the claims stack up?

With claims such as "high in fibre", "fibre for digestive health", the "goodness of three grains" – you'd be forgiven for thinking the products are, well, high in fibre. But the industry's own voluntary Nutrient Claims Code of Practice allows products with as little as 1.5g of fibre per serve to claim they are a "source of fibre".

In January, a new food standard to regulate nutrition content claims on food labels was introduced, with manufacturers given three years to comply. Under the new standard, a product will be required to contain at least four grams of fibre per serve before it can claim to be a "good source".

Market leader Sanitarium - whose Up&Go products claim to be high in fibre yet have under four grams per serve - is one of the manufacturers that will need to change (either their composition or their labelling) before the 2016 deadline. And while others may just meet the 4g fibre per serve requirement for the claim, the value of the fibre typically used in breakfast drinks has been called into question.

Given that breakfast is traditionally the meal with the highest fibre content, it's disappointing that these drinks don't contribute more to our daily intake.

After 2016, a product must offer at least 10g per serve before it can claim to be a good source of protein. Kellogg's Nutrigrain and Coco Pops breakfast drinks both make this claim, but their current protein levels come in at 9.5g and 9.8g per serve respectively. Vitasoy's VitaGo banana and honey, chocolate, and vanilla drinks also spruik their protein levels, yet fall below what will be required.

Found in fruits, vegetables, oats, dried beans and lentils, soluble fibre dissolves in water and works to lower blood cholesterol and glucose levels. Insoluble fibre – the type found in wholegrains, the outer skins of fruit and vegetables, as well as nuts and seeds – promotes digestion and a healthy bowel. To receive the greatest health benefit, the Dietitians Association of Australia recommends we eat at least 30g of a wide variety of fibres each day.

Inulin, a starchy carbohydrate commonly derived from chicory root, is the favoured choice of fibre in liquid breakfasts, known for its ability to add a smooth feel without unwanted taste or texture. Devondale, Kellogg's, Sanitarium and Vitasoy all use it in their products. While inulin counts as "dietary fibre" under the Food Standards Code, it's different from the fibre provided by wholegrain cereals and it's not the same as oats.

Nutritionist Dr Rosemary Stanton isn't convinced that it's on a par with other fibre sources.  "I really believe the jury is still out as to whether inulin has the same benefits," she says. "It is a form of soluble fibre, but whether or not it is equivalent to wholegrain fibre I think is very much in doubt."

Accredited practising dietitian Melanie McGrice says the growth of inulin as a dietary fibre in processed food places her profession in a difficult situation. "If you're going to skip meals, a drink is better than nothing," she concedes. "However, I certainly don't want to advocate that it's fine to drink these products every day."

While lactose - a type of sugar - occurs naturally in milk, it's the added sugars at the top of the ingredient lists that are of concern.

Ten of the drinks reviewed have more than 23g of sugars per serve, roughly the same as a regular chocolate bar. Naturally occurring sugars in a cup of full-cream milk are about 12g.

Breakfast is traditionally the most fibre-dense meal of the day - a good reason to ensure you set aside time for it.

A serving of oats with a handful of almonds and a sliced apple will give you about 11g of fibre (both soluble and insoluble), which is a third of your daily recommended intake. This is double – and in some cases, more than triple – the amount of fibre available in the liquid breakfasts we analysed.

Or consider one of the products we recommend in our breakfast cereals article.

Stanton says manufacturers encouraging the "snackification" of breakfast by marketing these products as if they were complete meals is of tremendous concern. "More and more we're moving people away from the idea of planning meals, which is not a good thing. These drinks aren't the equivalent [of a bowl of cereal] – they're cashing in on a healthy image to make people buy, when really what manufacturers are selling are snack drinks."

The energy content of the drinks we reviewed ranges between 700kJ and 912kJ, despite a regular meal being about 2000kJ. With the energy content being more like a snack than a meal, those who consume liquid breakfasts may be prone to mid-morning snacking.

Stanton also believes there is no excuse for kids who don't "like" breakfast. "If kids won't eat their breakfast, they need to learn better eating habits – it's just something they should be taught to do," she says.

McGrice says while the convenience factor appeals to many people – the average Australian dedicates just eight minutes a day to preparing and eating breakfast – grabbing a tub of yoghurt and an apple instead of one of these products is a convenient and less processed alternative.

Still, for those who do decide to drink their breakfast, the news isn't all bad. Of the products we reviewed, most offer added vitamins and minerals – particularly vitamins B6 and B12, vitamin C, vitamin D, folate and niacin. Calcium levels are also impressive; most will provide you with 30-40% of your calcium RDI.