How to select and serve the best cheeses. 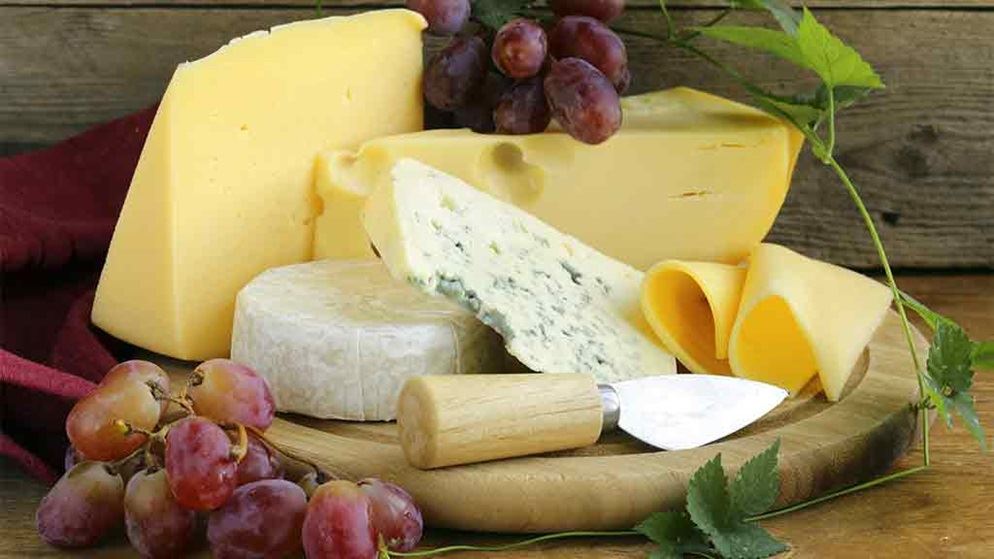 Every great party starts with a great cheese platter. Perhaps a nice wedge of brie, nestled next to a piece of blue and a chunk of manchego, some water crackers and crispy lavash on the side, accompanied by your favourite wine.

But unless you're a professional "fromager", or at least well versed in dairy delights, your cheese platter might come off as a little "ordinaire" and lacking that something special.

In this article, we explain how to pick the best cheese, regardless of whether you shop at the supermarket or a specialist, and how to serve it. We even suggest which type of wine to wash it down with.

Picking the best cheese for your buck will depend on where you shop. The two main options are supermarkets and delis. Supermarkets mainly offer pre-packaged cheese which often obscures the contents, while delis usually cut cheese fresh from a wheel or block. Keep these tasty tips in the back of your mind when shopping for cheese:

What's the difference between camembert and brie, and can everyday cheddar still be special on a cheese plate? Most importantly, how do you pick the perfect wedge? Our guide will help you understand the different kinds of cheeses and how to select and serve them. We've included a few drinks that compliment each cheese.

Parmigiano-Reggiano and Grana Padano cheeses also make a tasty addition to any cheese board – we've covered these separately in our article on parmesan cheese. You might also try adding feta cheese to the selection.

Brie and camembert are both soft cheeses covered in a white mould. Traditionally, they were made very differently so their flavours were quite distinct. Today this difference is less pronounced – sometimes even indistinguishable – and usually determined by the individual cheese maker. Double and triple cream brie and camembert has a richer, creamier texture than single cream equivalents, but they pack a higher fat content as well.

If you're buying a white mould cheese from a supermarket, depending on its packaging you may not be able to determine how it looks or smells. In a deli or specialty cheese shop, where you have the opportunity to view and taste the product, you can use the following guidelines to help you make your selection:

In the case of a pre-packaged supermarket cheese:

Serve white mould cheeses at room temperature with a dry, sparkling white or a fortified wine such as Muscat, Tokay or port.

Cheddar takes its name from the village of Cheddar in Somerset, England, which devised the process of "cheddaring", whereby blocks of curds are stacked like bricks, releasing moisture. As cheddar ages, it changes from having a smooth texture to being dry and crumbly with a sharp flavour. The descriptions on the packaging indicate how old the cheese is and, therefore, how developed the flavour will be. Quality depends on the types of cheeses used and how well they are combined.

Aged or mature cheddar crumbles and has a long, sharp flavour; semi-matured or tasty is slightly moister with a developed flavour. Mild cheddar slices well for use in sandwiches without overpowering the other fillings. Club cheddar is made from selected cheddar cheeses shredded and compacted together to make a block.

Selecting quality cheddar isn't as complicated as selecting  white mould cheese. It can come down to personal preference regarding flavour profile.

Serve cheddar at room temperature with a Cabernet Sauvignon, Shiraz, or a dry Chardonnay.

Blue vein cheese is well-known for its distinct taste and smelly scent. The blue veins are created by inoculating the cheese with a mould – usually Penicillium roqueforti – which ripens from the inside out, unlike white mould cheese. The cheese is pierced with metal spikes during maturation to allow in oxygen, promoting growth of the blue veins. Blue cheese comes in different styles, from soft and mildly creamy to firm, crumbly and strong flavoured.

As with white mould cheese, packaging can obscure the look and smell of a blue cheese. To ensure it's ripe for serving, make sure it:

Serve blue cheese at room temperature with an aromatic white wine such as Sauvignon Blanc or Riesling. If you're a beer drinker, blue cheese also goes down well with lager.

Cheese in the raw

Unlike the European Union, the UK and most of the US, Australia had – up until 2012 – banned the home-grown production of unpasteurised or raw milk cheese. Some types of cheeses made from raw milk were, however, allowed to be imported. An uprising among cheese makers, slow food groups and foodies led to Food Standards Australia New Zealand (FSANZ) lifting the ban and allowing the traditional artisan practice of using raw milk to make cheese – but only for a few, select varieties. Australian cheese-makers are now allowed to make raw milk cheeses that are heated to 48°C during the production process and have a moisture content of less than 36%, namely: Emmental, Gruyere, Sbrinz and Roquefort.

Two local cheese producers have been given special exemption from these laws. Hindmarsh Valley Dairy in South Australia may produce raw goat's milk cheese, and Nick Haddow from Tasmania is free to produce any cheese from raw milk.