We explain which feta is which, and how to choose the best. 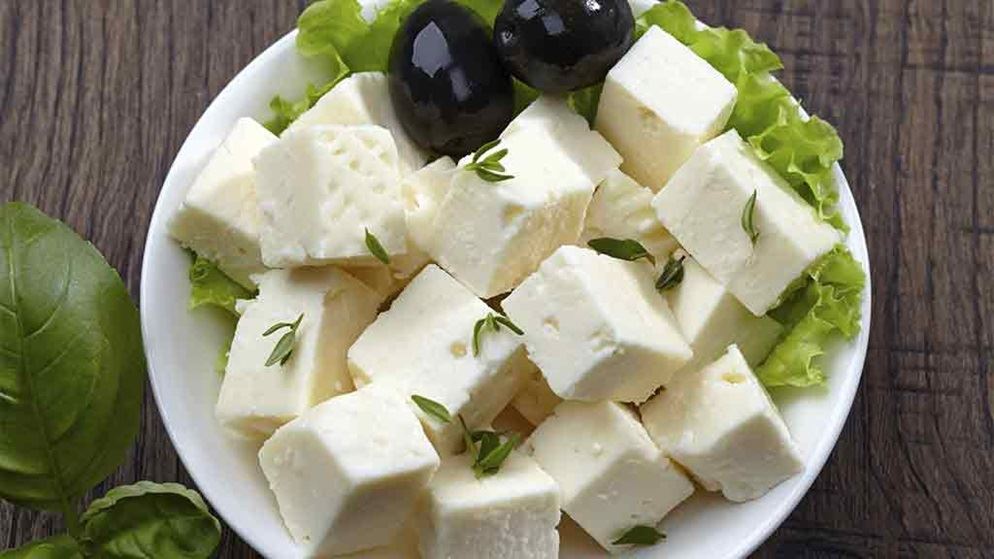 Have you ever found yourself standing at the deli counter staring at six different types of feta cheese with no idea which one's which? You just want something to toss through your salad or add to your quiche, but how do you choose between Greek, Danish, Australian, Bulgarian, low fat, full fat, marinated, sheep's, goat's or cow's?

Allow us to solve your feta confusion!

Around the world in feta

Feta has a tangy, salty flavour and can range from soft to semi-hard. Most feta you find in supermarkets is sold as blocks or chunks in brine, in packs or tubs. The Greeks were the first to make feta, but these days variations of feta are made all over the world.

Here's how to tell them all apart:

Traditional Greek feta is made with at least 70% sheep's milk, with goat's milk often making up the other 30%. The flavour is salty and tangy, the texture dry and crumbly. When CHOICE taste tested feta cheese a few years back, the 'Greek-style' feta rated highest.

Danish feta is made from cow's milk and has a milder, creamier texture. Feta purists argue that 'Danish-style' feta, made using the ultrafiltration method, isn't authentic, but many people prefer its creamier, smoother texture. You may prefer to use Danish-style feta for recipes aiming for a smoother end-product.

Traditional Bulgarian feta is made with sheep's milk and a yoghurt culture, which gives it a particularly tangy taste.

Australian feta is usually made from cow's milk. The texture and flavour can vary, but it's generally a happy medium between the saltiness of Greek feta and the creaminess of Danish feta.

Feta marinated in oil and flavoured with ingredients like herbs, spices or lemon zest can be delicious, and we’re seeing more of it in the supermarket.

Marinated feta makes a great addition to an antipasto plate, can liven up a salad or toasted sandwich and is just as good eaten straight from the tub. You'll generally pay more for the marinated product, so try making your own using our recipe.

Flavoured feta has ingredients like pesto, garlic or olive mixed through it. The pack labels suggest you add it to salad, a tart or pasta. Our taste testers likened flavoured feta to 'club' cheese that's passed off as cheddar – essentially it's not feta in the true sense of the word. But if you like it, go for it!

Crumbled feta caters to a market in the same way as grated mozzarella or shaved parmesan. It may be handy for salads or pasta or pizzas, but you pay for the convenience of having somebody else pre-crumble your cheese for you. In most cases it's cheaper to buy a block and crumble it yourself, which you have to admit, is pretty easy!

The best ways to use feta

Plain feta is extremely versatile in that it can be used in many cooked dishes (anything from spinach or vegetable pies to pizza), to top off a Greek salad, or simply as a table cheese. Some of the on-pack serving suggestions we've seen include "drizzle with olive oil and sprinkle with herbs, chilli or cracked pepper and serve as antipasto with fresh bread", "toss through hot pasta", "add to omelette or scrambled eggs", "serve with watermelon or as part of a fruit platter".

How feta is made

Starter bacteria and rennet are added to pasteurised milk, which then sets like a junket. This junket (now curd) is cut into cubes, and whey (a watery liquid) comes out of the curd, leaving the curd more concentrated. The curds are placed into forms (moulds) and more whey is released from the curd making it even more firm and concentrated. The cheese is then salted by immersion in brine (salty water) and matured for a minimum of two months. It's often stored and sold still in the brine.

The texture of traditionally produced feta is firm and open (gaps in the curd) and it easily crumbles apart.

This technology for cheese manufacture was introduced in the early 1970s. Pasteurised milk is passed through a special filter resulting in a concentrated, viscous liquid, which is poured into forms. Starter bacteria and rennet are then added to the concentrated milk and it turns to a solid. As with the traditional method, the cheese is then salted to finish the process. UF is a faster process than the traditional method and has the potential to increase yield because the whey proteins are incorporated into the final product.

The texture of UF feta is smooth, creamy and closed (no openings).

As a general rule of thumb, if your feta is labelled "Danish-style" it's likely to be UF, as the bulk of feta made in Denmark (one of the largest feta producers after Greece) is produced using this method.

Greek-style feta, on the other hand, is more likely to have been produced using the traditional method.

A feta by any other name

The name 'feta' has been used since the 17th century when Greece was under Venetian influence. It comes from the Italian word for 'slice', most likely referring to slicing of the cheese curd into cubes when it's being made. Traditionally, feta was made with sheep's and/or goat's milk using a slow filtration process, but feta produced outside of Greece is often produced from cow's milk using the ultrafiltration process.

Greece vs the rest of Europe

After a long legal battle with Denmark, Germany and France, Greek feta was granted Protected Designation of Origin (PDO) status by the European Commission in 2002. This means that feta sold in the EU can only be labelled as such if it comes from Greece. PDO legislation is enforced within the EU, but doesn't apply elsewhere (unless there's a bilateral agreement). That's why in Australia we can buy 'feta' from Denmark and Bulgaria, for example – within the EU it has to be remarketed under a different name.

Make your own marinated feta

This recipe is straightforward, tasty and you can even spice it up by adding whole peppercorns or dried chilli flakes to taste.