How supermarkets are designed to make you spend more. 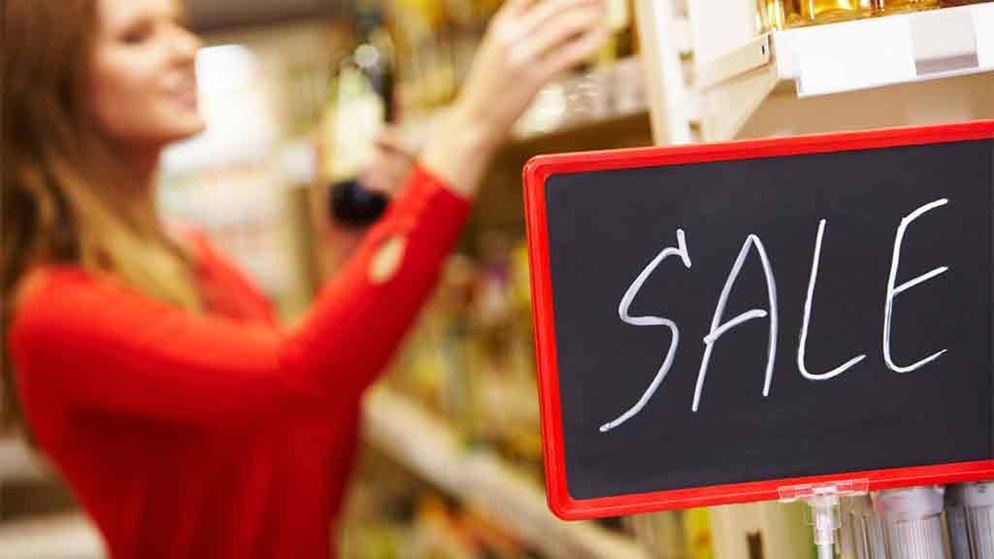 Want to save on your next grocery shop?

Ever wondered why the fresh fruit and veg is the first thing you see in store? Or why the bread and milk are so far away? Supermarkets spend millions of dollars researching consumer behaviour in order to develop tactics to compel you to buy more in their stores.

CHOICE takes a look at some of the more common tricks of "trolleyology" to help you avoid blowing the budget next time you grab a shopping trolley.

The path most travelled

Consumer psychologists say veering to the right when you walk into a shop is a classic biological trait linked to most people's preference for using their right hand.

Consumer psychologist and Senior Lecturer at Deakin University, Dr Paul Harrison , says a store's entry is not the only point of significance. "Research in the US has shown that shoppers who travel in an anti-clockwise direction will spend, on average, two dollars more per trip than clockwise shoppers."

The most common path to travel in-store is around the outside perimeter, dipping in and out of the aisles as needed. As a result, the ends of each aisle are the most profitable part of the store.

When you enter a big supermarket fresh fruit and veg is the first shopping zone. Although it's not logical to have squashable fruit and veggies as the first items to pack into your trolley, this department is deliberately located to give the supermarket a positive image of being fresh and healthy.

People who use the fresh food areas also tend to spend more money in the store overall.

By setting up different "marketplace" areas, it feels as though we've visited several different stores rather than a single big shop. Each of these areas has different lighting, floor coverings and sometimes individual counters for service (such as a deli). "It's all about creating a market-like feel," says Harrison. "Areas such as the bakery, apart from smelling good, give the impression the supermarket is trustworthy. It's like they're saying, 'You can trust us because we make stuff.'"

No matter what we might like to think, it's human nature to be attracted to a bargain. "Although we think we know we're being manipulated, we tend to fall for it anyway," says Dr Harrison. Even the word "special" plays on our subconscious. "Just the word sets off a psychological process in your mind where if something is labelled 'special' we think it must be good. It also feeds into a theory known as the scarcity effect. This is where we think that if it's on special, then it must only be available at this shop or for a short time, and we afford it more value than the products around it."

The long and the short

A classic retailing trick is to put the milk and bread at the very back of the store (often at opposite ends) to encourage short-term shoppers to walk right through the shop and be tempted to buy other products along the way.

Recent research has shown it's actually more efficient to have these products toward the front of the store, and place the other impulse products close by. "Smart supermarkets are putting a small area with a limited selection of bread and milk at the front of the shop for those shoppers whose motives won't be modified, and then having a more extensive selection of bread and milk at the back," says Dr Harrison.

Soups and dressings often involve long buy times because of the sometimes confusing variety of options on offer. As a result, long buy-time products are placed where shoppers will not feel hurried, crowded or as if they're getting in the way of other customers. These product areas will often be clearly marked out in a separate section of the shop.

The colour of advertising 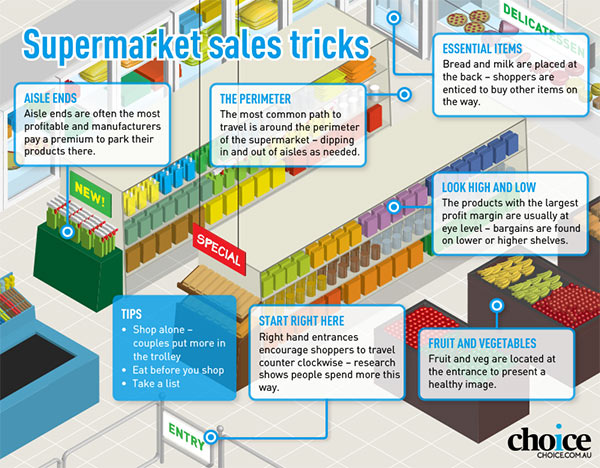 The products that make the largest profit margin will usually be found at eye level – you won't find a bargain in the best shelf spots so it pays to look further up and down.

The ends of the row are often the most profitable area for product manufacturers and they often pay a premium to have their product placed there. These displays also act as a welcome mat to lure shoppers further down the aisle.

Last-minute temptations such as chocolates, lollies, magazines and cold drinks are all located here to entice bored, tired shoppers (and their children) while they wait to be served.

Essentials such as bread and milk are placed at the back of the store, often at either end. This is to entice shoppers to buy other items on the way.

Products that are a good match – such as coffee and biscuits – are often placed nearby to prompt you to buy both items.

The most common path to travel is around the outside perimeter – dipping in and out of the aisles as needed.

The fruit and vegetable section is located near the entrance – it's there to present a fresh and healthy image. It's also designed to look like a marketplace, which encourages shoppers to stay in-store longer and to spend more.

Right-hand entrances encourage shoppers to travel in a counterclockwise direction – research has shown that shoppers that travel in this direction spend more.