Review sites can be a great source of information, but can they be trusted? 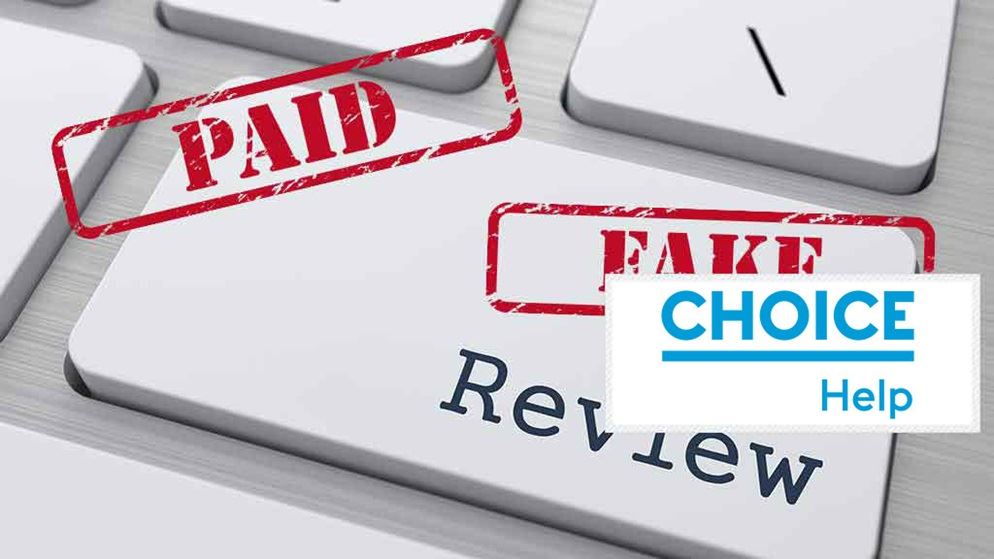 Fake it 'til you make it

We all like to buy things that have been reviewed and recommended by others, but CHOICE has found you can't always trust these recommendations, especially those found online.

When it comes to shopping for products and services, it isn't hard to find specifications, marketing information or even a sell job. But when you're ready to make that final decision to buy, you'll probably want to know what "real" people think about the product or service, whether that comes as word of mouth or you read a review online.

A US study found 89% of consumers find online channels trustworthy sources for product and service reviews, and 87% said a favourable review confirmed their decision to buy a product. And a significant proportion said that they prefer these reviews to be backed up by the opinion of friends or family.

Clearly the power of reviews is potent and lucrative, but what happens when something you think is an honest appraisal is just savvy advertising dressed up to look like a trusted friend?

Astroturf in your own backyard

Websites, forums and social media channels are all places where you'll have no problem finding people with an opinion. And then there are the user-generated review sites for just about everything, from travel review site TripAdvisor to restaurant review site Eatability and sites that review local businesses, such as Yelp.

Although review sites can give you plenty of helpful info when you're in research mode, they can also be misleading. US-based research and technology group Gartner predicted that by 2014, up to 15% of all online reviews will be fake, paid for by companies. While the jury is still out on whether this has been achieved or even surpassed, the experts we spoke to agree it's a trend that's on the rise.

When you see a trending topic on social media, it's worth asking: who's driving the trend? One astroturfing technique is to create hundreds of fake personas that are used to create an online buzz. Nassar says when Channel 7 launched Dancing with the Stars a few years ago, he noticed that many of the enthusiastic tweets going to air during the show were from accounts that had only been created a few hours before, had only one or two tweets on them and only about that TV show. Checking further, Nassar discovered that although there were 10,000 tweets posted on Twitter that night about the show, of the 20 that were broadcast on air, 25% were from the newly created accounts.

And it's not just fake accounts getting in on the astroturf action. In 2012 a number of high-profile Australians such as singer Shannon Noll and celebrity chef Matt Moran were tweeting their previously unmentioned enthusiasm for Kangaroo Island in South Australia. Later, the ABC revealed that an agency working on behalf of the SA Tourism Commission was paying celebrities $750 per tweet about the island, but had specified that the tweets must appear "organic and spontaneous".

Of course, artificial influencers don't just operate in the consumer world. Even the US Army has been reported to have recruited people to create fake personas to promote the US's interests via social media, with a particular focus on the Middle East.

To highlight just how easy it is to generate a buzz, we decided to buy some popularity ourselves.

For $20 we were able to buy 1000 twitter followers (for a new account set up for this purpose) and for another $20 we purchased a whopping 5000 YouTube views for a video clip made in-house at CHOICE which, funnily enough, is a parody ad about fake reviews.

Within 24 hours our Twitter account had 1000 new followers and within two days Big Kev at Click Kings' views had jumped from 500 to 1800 and counting. So it seems when it comes to social media popularity, the sky's the limit – as long as you're happy to pay. 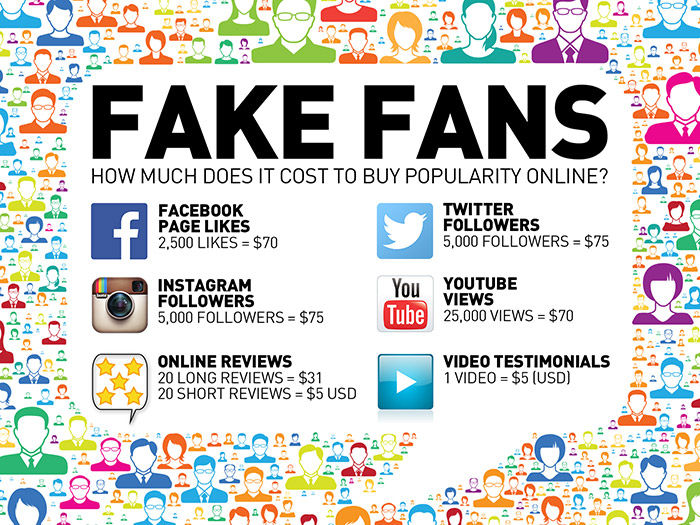 Dee Madigan, Advertising Creative Director and author of The Hard Sell, says that fake reviews to promote products or services are extremely common. "I've worked for companies that will set up heaps of them. Say you have a whitegoods company; you might set up a website called Fridgereviews.com.au and set up your own [personas to submit reviews] and make sure [the site] is optimised to rank highly in Google searches".

And although it's not quite as easy as buying likes or followers, it's still surprisingly simple to find someone who'll endorse your product or service – for a price. Here at CHOICE, using a fake email address, we posted a job on a popular freelancing site asking for 20 product reviews. Within 24 hours we received 11 bids for the job from freelancers as far afield as South Africa and Jamaica, all willing to write a variety of positive reviews highlighting aspects of the product as instructed.

We selected one freelancer who completed the job exactly to our specifications in 48 hours for just $31.00. Popular site Fiverr.com is also bursting with punters offering to write positive product or service reviews and even video testimonials – all for $US5 a pop.

In the world of blogging, we may need to remember that our "friends" who recommend stuff for us to buy aren't necessarily people we actually know in person.

Successful bloggers can have thousands of unique visitors to their site every day and develop a strong relationship with their regular readers. Thanks to that strong connection, plenty of big brands have come a-calling, offering bloggers freebies or remuneration in return for a positive write-up or review. In the US, blogger Heather Armstrong is rumoured to earn thousands of dollars for a sponsored post on her blog and charges up to US$20,000 for a speaking appearance.

While Australian bloggers aren't in this league, their commercial appeal is on the rise. The Remarkables Group is an agency that represents Australian bloggers in the commercial space. Owner and director Lorraine Murphy says she set up the company after working in advertising and seeing interest in the market for bloggers to do commercial work. Murphy has 24 high-profile yet previously non-professional bloggers on her books, who get between 80,000 and 135,000 unique users on their site a month. So far the agency has paired the bloggers with a variety of companies as diverse as insurers, supermarkets and retailers.

And it's easy to see the appeal. One of Murphy's bloggers, Nikki Parkinson, is famous for crashing a fashion retail website through consumer demand for a dress she recommended on her blog.

This kind of power doesn't surprise Murphy. "Consumers are looking for people who are like them. It's a peer-to-peer recommendation and the relationship readers have with their bloggers is no different. When we've done research in the past, one of the strongest responses we've had from readers is that [reading a blog is] like catching up with a friend."

It's all about disclosure – bloggers being upfront about what is a paid or "sponsored" post. Bloggers in the US are legally required to disclose any commercial arrangements, but in Australia they're not. However, Murphy says smart bloggers should do so in the interests of keeping both their integrity and their readers.

But blog fans beware – just because your favourite blogger says they love a product doesn't mean they really do. They might just love the money they're receiving to write positively about it.

As consumers, it seems we love a seal of approval, something CHOICE can credibly provide. But what about some of the other third-party groups that purport to have that authority, such as Brand Power, MediFacts, and What's New?

These TV spots are presented as news breaks, complete with their own program titles, and give the impression they're reviews from an independent organisation. They typically feature presenters or celebrities giving their opinion on a variety of everyday products, along with the impression these products have been researched, tested and approved.

But here's the rub – these "news breaks" are simply paid advertising, dressed up as a review. Advertising guru Dee Madigan says although this kind of advertising is not dissimilar to direct mail, in that it's relatively cheap and aimed at a mass audience, it's far more convincing than a traditional ad because it's positioned as being presented by a third party.

"The way they are constructed is deliberate – it's like a news break or has a documentary feel," Madigan says. "People assume these groups are like CHOICE, and they've been deliberately created to look like that."

Can they do that?

Yes they can, according to Madigan, so long as a company submits a statement to the Free TV Australia's Commercial Acceptance Division stating the piece for camera was not scripted. However, as she points out, the ad will obviously only use the positive experiences, and "if you were on the payroll to do this, you'd have to be pretty dumb not to say positive things about the product".

Most of the experts we spoke with say it'll be difficult for the law to keep up with emerging technologies, so it's up to consumers to read with caution. However, while there's no doubt there are still plenty of fake reviews out there, there've been some positive moves at home and overseas to crack down on the practice.

The ACCC also provides tips on fake reviews with this guide to help consumers spot the difference.

A spokesperson from the ACCC told CHOICE that the Australian Consumer Law (ACL) prohibits "false or misleading testimonials". What constitutes misleading depends on the circumstances, but online reviews are covered.

According to Madigan, it's savvy consumers who'll drive better behaviour on the web going forward. "The increase in bogus reviews and cash for comment will eventually have an impact on consumers, and people will become less trusting. On the bright side, it's a good opportunity for companies that manage their own content and keep it unbiased. They will be the ones that do well."

In the USA, the New York Office of the Attorney General outfaked the fakers. The office set up a pretend yoghurt shop and sought businesses to promote the shop, providing review writers less than $US10 per fake review. The result of the year-long sting resulted in 19 companies agreeing to cease their misleading practices and pay US $359,000 in penalties.

In Australia, the ACCC has made it clear that fake reviews are in its sights. In July the ACCC instituted proceedings in the Federal Court against A Whistle (1979) Pty Ltd, the franchisor of the Electrodry Carpet Cleaning business, alleging that it was involved in the posting of fake online testimonials.