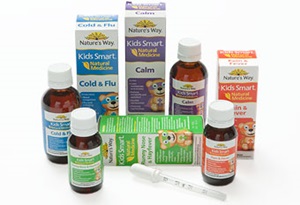 Shonky loves homeopathy. The idea of selling water for upwards of $1000 per litre and claiming it's medicine represents the very essence of shonkiness. But convincing anxious or desperate parents they can use it to treat their children's ailments takes it to a whole new level. Introducing the Nature's Way Kids Smart Natural Medicine range, with variants for colds and flu, hay fever and runny nose, pain and fever, and for calming kids down. Already feather-whipped by the TGA for making unsubstantiated claims about the uses and effectiveness of the products, the company has done nothing to temper its assertions the products might actually do something.

Most of the homeopathic "ingredients" – and given the dilution factor, we use the term loosely – feature plant extracts, including strychnine and insecticidal Sabadilla, and arsenic. Stop. Rewind. Was that strychnine? They're giving kids strychnine? Sure enough, the "Nux vomica 6C" in the "Calm" liquid is the homeopathic term for strychnine, in a dilution of one in a trillion.

To picture this 6C dilution in real terms, imagine you have an Olympic-size swimming pool full of water. Now take 20 such pools, and join them all together. Now put one drop of the strychnine "mother tincture" (the original liquid containing the now-discarded strychnine) in this mega pool, stir, and you have a 6C Nux vomica swimming pool. Worried? Well don't be: this is further diluted in the bottle by a further one-thousandth.

Clearly the harm doesn't come from the stuff itself – it's effectively water with blackcurrant flavour. The harm comes from it doing nothing for your children in the expensive and mistaken belief you're doing something.

As public health campaigner Dr Ken Harvey points out, "Symptoms like 'restlessness, anxiety, irritability and agitation' the 'Calm' claims to treat can be the symptoms of potentially serious childhood infectious diseases for which a homeopathic remedy is entirely inappropriate, and such misguided treatment might make a parent postpone seeking more appropriate medical advice to the child's detriment.

"In my opinion, such promotion is dangerous and an affront to public health and medical science."

The claims have been referred to the Australian Competition & Consumer Commission (ACCC) for investigation. NSW Fair Trading has written to the ACCC and offered to assist.