Is this sleek-looking cordless vacuum a revolutionary improvement on the Dyson V6? 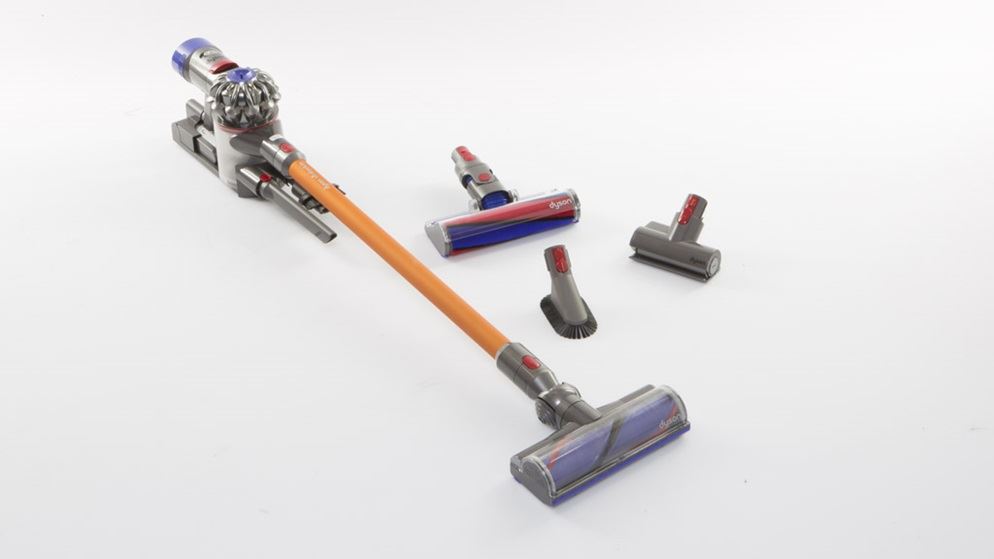 Cordless stick vacuum cleaners carry an air of versatility that their often cumbersome, conventional barrel counterparts can only dream of. Here at CHOICE we've seen this market explode in recent years, with manufacturers scrambling to release stick vacs that are light and portable, yet durable and powerful enough to keep your place tidy between your "big" vacuums.

Dyson's latest offering is the $849 V8 Absolute, the successor to the popular V6 Absolute ($699), which is a CHOICE Recommended product and still readily available.

Dyson's stick vacuums can be used on hard floors or carpets like a regular vacuum, but are light enough for you to hold aloft in order to clean ceiling corners and fans, too. The vacuums can be used without the wand to let you tackle tricky jobs like car floors, keyboard dust and upholstery using a range of motorised and non-motorised tools (the latter of which won't drain the battery as quickly).

But all of this is stuff that you can already do with Dyson's other stick vac offerings. Does the V8 truly have the edge?

Where there's not much in it...

Our expert tester Peter Horvath found that the V6 and V8 perform similarly overall despite a few design and battery differences. For instance, the V8 claims to have seven minutes of battery run time in "max" mode, compared with six minutes on the V6 – hardly a revolutionary improvement (in our testing we found that the V8 lasted a bit longer than claimed fresh out of the box – nine minutes on max – but still not much more compared with the V6, which lasted seven minutes).

It also claims to have a more powerful motorised "brush bar" than the V6, but in our test we found that the V6 actually picked up a fraction more dirt on carpet in standard performance tests, scoring 71% as opposed to 68% for the V8. The V6 scores 77% for hard floor pick-up as opposed to a slightly better 80% for the V8.

On the plus side, the battery will serve you well on standard settings. The V8 lasted an impressive 33 minutes in standard mode, even while using the motorised brush bar. A handy battery indicator also lets you know what level the charge is at.

The vacuum does not have an on/off switch. Instead, it only operates when the trigger is squeezed, which means you don't have to worry about the battery wasting away too much during moments when the vacuum is idle. 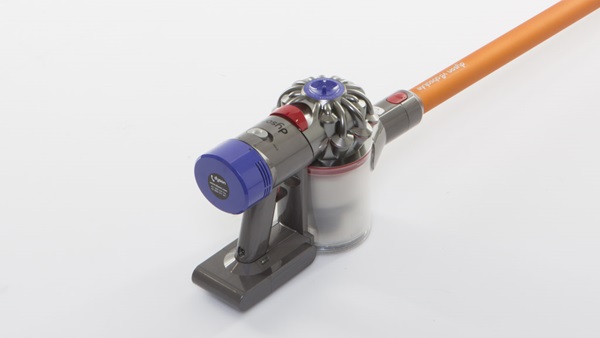 The Dyson V8 Absolute has an excellent range of tools.

The tools provided with the V8 are also excellent; much of the CHOICE staff enjoyed having their keyboards cleaned using the special brush!

Another claimed improvement is the dirt receptacle, which Dyson says is more hygienic as emptying it only requires a single action, but Peter found the V6 and the V8 equally easy to empty, although there are slight differences in the process. Volume-wise the measured capacity is still quite meagre at 0.3L so you'll find yourself emptying it quite frequently, despite reports of improved capacity.

Several CHOICE staff who tried to open the V8 had issues at first as pulling the quick-release mechanism was not as smooth as expected, and closing the unit felt a bit sticky, but it's something you'll probably get used to.

Our conclusion? The V8 does have somewhat better battery life and a truly excellent range of tools, but those of you who already have a V6 need not feel that you're missing out on the latest and greatest cleaning tech. For those making the foray into stick vacuums for the first time, then the V8 is very good, and is a recommended product. We'll publish the full results in the next online stick vacs review, so you can compare the specifications, performance and ease of use with other models on the market.