Is this stick vacuum the most powerful yet? 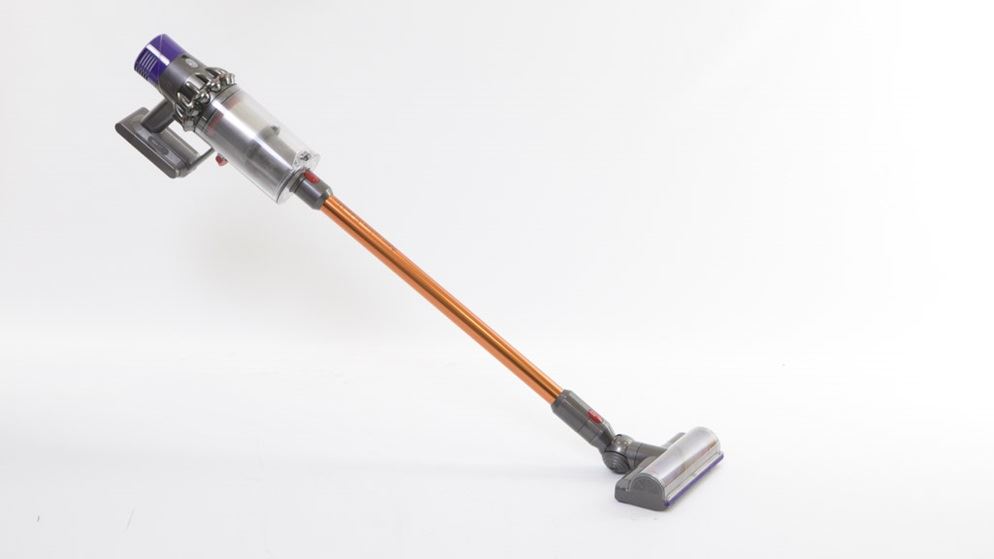 The future is cordless

Dyson has boldly stopped developing the mains-powered vacuums it became famous for in the 1990s. It sees the future as "being entirely in battery machines", founder James Dyson told reporters ahead of the launch of its Dyson Cyclone V10 cord-free vacuum – which it claims delivers "full size suction power". Apparently, this vacuum can even adjust its performance according to the weather.

Should the corded establishment be worried about the shake-up in this suction space? We tried out Dyson's top-of-the-range V10 model, the $999 Absolute+, ahead of its global March 2018 release for a first look, putting it through its paces in our purpose-built vacuum labs to see how it really compares to traditional barrel or upright vacuums.

Dyson V10 and V11 vs LG, Electrolux, Bosch and more

Stick vacuums, which are relatively lightweight and operate on rechargeable batteries, have surged in popularity. Already, 28% of CHOICE members surveyed own a stick vacuum, and 73% of them opt for a Dyson, which enjoys high satisfaction and reliability. Many CHOICE community members (and staff) use their stick vacuums all around the house, on carpet and hard floors. The mains-powered vac is spending more time tucked away in a cupboard, and Dyson is looking to capitalise on this. 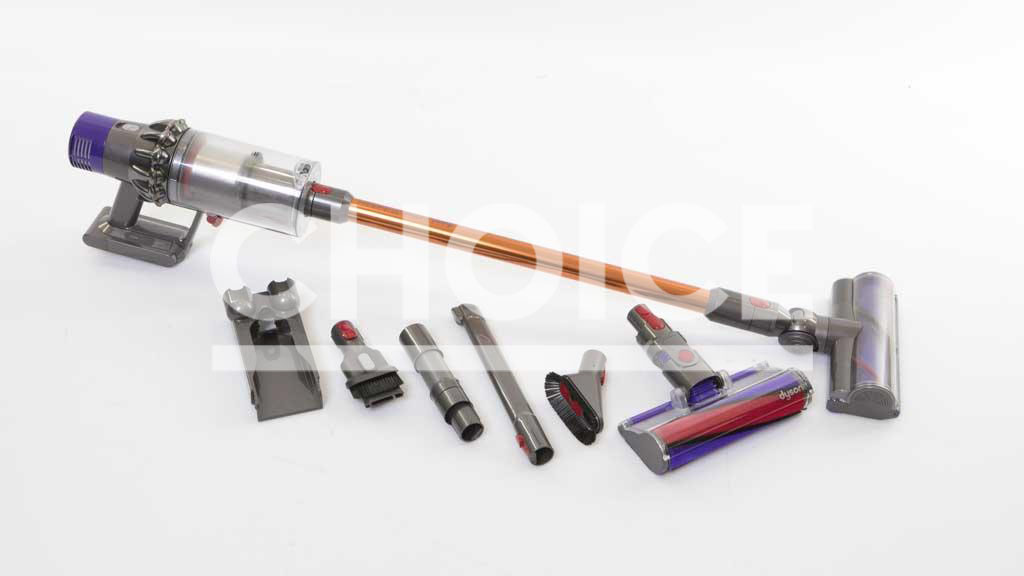 Some of the accessories that come with the $999 Dyson Cyclone V10 Absolute+. Others include an accessory bag, regular crevice tool and small motorised brush.

How is the Dyson V10 different to the V8?

Battery life limitations aside, our tests in 2016/17 of the cordless Dyson V8 stick vacuums (Dyson's fastest selling vacuums to date) show how the performance gap between corded and cordless vacs is decreasing, with impressive dirt pick-up from carpet that is comparable to many full-size, corded vacuums.

Compared with the V8, the V10 claims to have: 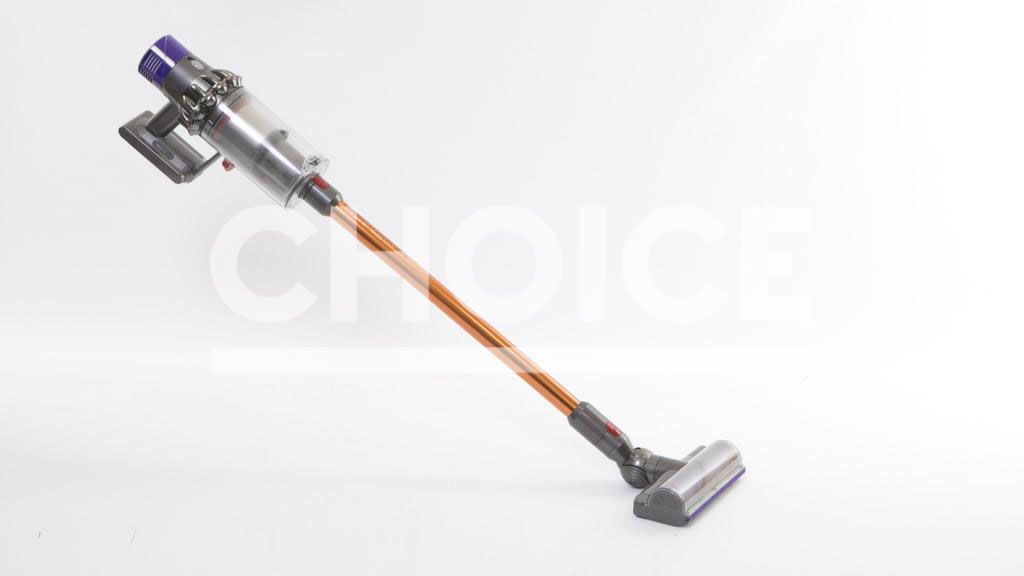 The Dyson Cyclone V10 has a bigger bin and a redesigned suction mechanism.

We always test our stick vacuums on their highest speed setting to give them the best chance. We tried the V10 on max, but checked out how it fares in medium mode too.

Our test is conducted on hard floors with cornflakes, potting mix and flour, and we test them over two runs on carpet with a set amount of sand, and also with embedded pet hair, using the appropriate brush heads. We also conduct a "quick clean" test which involves a mere four passes across the carpet rather than 10, as we don't think people go over their carpet 10 times unless there's a particularly difficult spot.

The results of this test in max mode are impressive. But how does it compare with mains-powered vacuums?

When the limitation of battery life is out of the equation, the V10 generally performs better or as well on carpet than the mains-powered range of Dyson vacuums, and on that basis we think it lives up to its claim of having full-size suction power (for nine minutes, at least). It performs better than many vacuums we've tested, but our top-rated traditional vacuums are still better if you don't want to be constantly emptying the V10's relatively tiny dirt receptacle or worrying about battery life.

Dirt pick-up from carpet is very good, and even "quick clean" dirt removal is good. It's also excellent in the more compact handheld mode if you're cleaning pebbles from your car.

What about the longer lasting medium mode? Predictably results aren't as impressive as they are in max mode, but they're still good and would suit those 'in between' cleans. 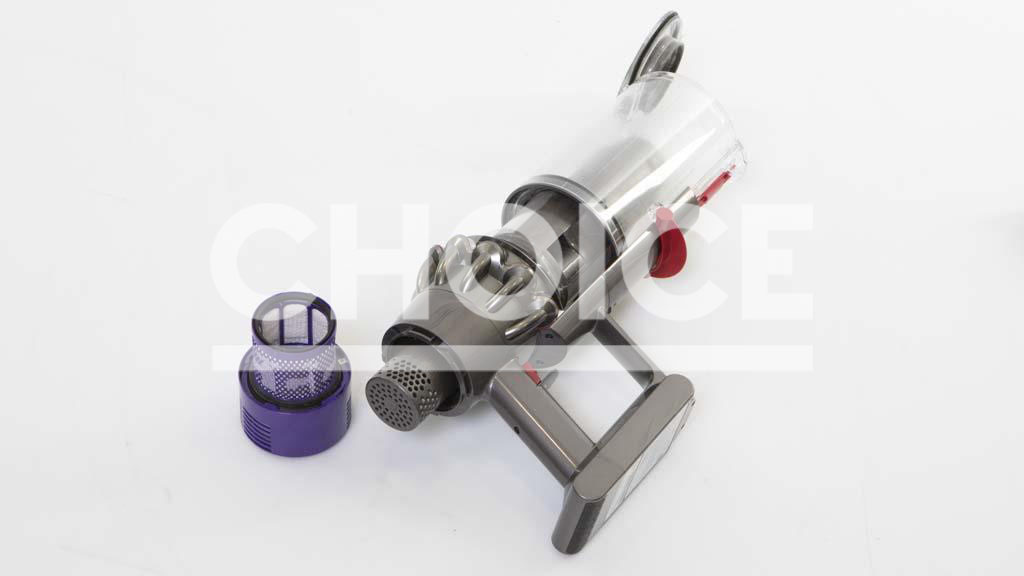 The Dyson Cyclone V10 bin pushes the dirt out in one action and the removable filter is easy to clean.

We didn't rate these other features, but they include:

I'm happy with my current vac. Should I upgrade to a V10?

While we think the V10 is well worth a look, and in max mode can rival many traditional vacuums, if you've already got a Dyson V8 (and a mains powered vac) and are happy with them, there's no immediate need to rush out and upgrade as it costs $899–999. While the V8 has a longer battery charge time and a smaller bin capacity, it's still a great performer. Those who own a pre-V8 model will probably enjoy the biggest difference, as there is a significant jump in power and battery life. We don't know how long the V8 will be around, but the accessories on the V10 are reportedly backwards compatible with the V8, so you could theoretically have two in the house, maybe to swap over when the battery runs out on one of them.

On maximum mode particularly, the Dyson Cyclone V10 Absolute+ delivers on its full-size suction power promise. It's easy to use, but less compact than the previous V8. The usual stick vacuum problems about having to change the bin and worrying about when you're going to run out of battery are still there, but Dyson's gone some way to address this with the battery indicator and increased dust capacity.


Note: While we usually buy products in-store as a consumer would before testing, this time we used a review model for our first look ahead of its release. Since then, we've conducted a full comparative review of stick vacuums including the Dyson V10 and Dyson V8 plus other models from LG, Electrolux, Bosch and more.

Looking for the best stick vacuum?