Which is the better choice for novice surfers? 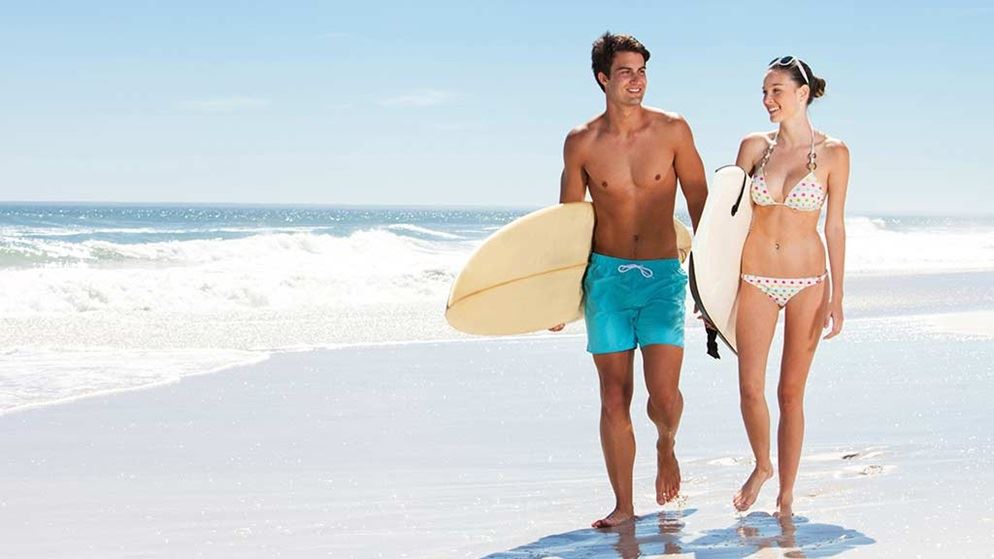 Are epoxy surfboards the real deal?

Once spring has sprung and temperatures start to rise, the sand, surf and sun begin to beckon. A new surfboard for Christmas may be on the cards, and if you're either getting back into surfing to recapture your glory days or you're a grommet just starting out, you may be looking at beginner options to make catching a break as easy and fun as possible.

Makers of epoxy surfboards claim they're more suitable for novice surfers compared to traditional fibreglass surfboards, thanks to their lightweight construction and ability to take more punishment than fibreglass boards - both important considerations for those just getting started.

Epoxy boards grew in popularity from 2006 due to necessity more than anything else, following the closure of the Clark Foam factory in December 2005 – which led to a major worldwide shortage of the polyurethane foam used in the production of traditional fibreglass boards.

Surftech, Firewire and Resin8 are examples of companies producing epoxy surfboards. They advertise these boards as being more durable and more buoyant than a traditional fibreglass board, ideal characteristics for people wanting to get back into surfing after a long layoff period or beginners who may require a bit of help when paddling for a wave.

Epoxy boards have a more plastic-looking finish compared to traditional polyester (fibreglass) boards. Epoxy construction has been used in the windsurfer industry for several years and looks set to remain a popular option in the surfing industry too.

Although professional surfers have ridden epoxy boards in competition, Taj Burrow being the main example, they are still primarily aimed at the beginner or recreational surfer, as well as older people wanting some help to get onto the wave.

The most significant difference between the moulded epoxy boards that we tested and fibreglass boards is that you know that an epoxy board from a particular mould is exactly the same size, shape and weight as the next one.

How is an epoxy board made?

An epoxy board starts with a light polystyrene foam core, which is sandwiched between high-density foam sheets and reinforced with glass and epoxy resin. The board is then compression-moulded, creating a lightweight board with a hard outer shell.

There are two types of polystyrene used:

None of the mass-produced epoxy surfboards are made in Australia. They're produced in countries such as Thailand, using designs created and by a master shaper.

While it's possible to get custom-made epoxy boards, the labour involved makes them a lot more expensive. Many professional surfers argue that the inability to have an epoxy board hand-tuned by an experienced shaper or sander is a disadvantage, but unless you're getting ready to head out onto the world circuit this probably won't be a major issue for you.

How is a traditional fibreglass board made?

A polyurethane/polyester board or 'fibreglass' surfboard involves a significant amount of hand shaping in both the preparation of the core or polyurethane foam blank, and the final sanding to get the finished product just right.

The blank is shaped as far as possible to the board's specifications and a piece of wood or 'stringer' is incorporated into the middle of the blank for added stiffness and durability. The blank is then covered with a fibreglass cloth and laminated with polyester resin. The board is left for a period of time to allow the resin to set, and then the board is sanded to the final specification.

So, while epoxy boards sound like the perfect solution for beginners or surfers getting back into the sport, we decided to look at the two major surfboard options to see how well the claims pan out.

We bought a series of surfboards at the popular sizes of 6'1", 7'0", 7'11" (mini Mal) and 9'6" (longboard) in both the epoxy and traditional fibreglass versions, and gave them to five surfers of varying skill levels to get their feedback.

All the boards in the test were weighed and measured for length, width and depth. Ease of use was assessed via a field trial at a well-known surf spot called 'The Farm' just south of Wollongong. Each board was trialled by the five surfers, who then answered a questionnaire about them.

Following ease of use testing, one polyester/fibreglass board and one epoxy resin board were subjected to a series of durability tests, including impact resistance - dropping weighted wooden blocks from various heights onto the rail (the side) and the top of the surfboard. Imprint resistance was also assessed to replicate general use out in the water.

At the end of testing, the depth at each pressure point was compared with the pre-test depth.

Overall, the epoxy board seems to be able to handle the general day-to-day bumps, dings and impacts better than the fibreglass board, though there was no major advantage with either when it came to a more forceful impact out in the surf.

There's no doubt that our panel found the epoxy boards easier - to paddle, catch a wave and turn. But the more proficient surfers found a slight loss of control when carrying out more radical moves. Duck diving, where a board is pushed under an oncoming wave, was found to be a bit more difficult when using an epoxy board because of the increased buoyancy.

When it came to picking a favourite, there wasn't a strong preference for one material over another from our triallists; some even liked a mix of epoxy and fibreglass boards depending on the size.

Although there were clear differences between the epoxy boards and the fibreglass boards according to our triallists, the differences were harder to quantify in our test labs. Regardless, there is no doubt that epoxy boards provide another option for surfers of varying experience and fitness levels, and that can only be a good thing.

Except for duck diving, the epoxy boards scored the same as, or better than, the older fibreglass boards, although in most cases the difference was only slight. While all of our triallists noticed the added buoyancy of the epoxy boards, there was no overriding preference for one particular size or material across all five of the testers.

Favourite boards:6'1" epoxy, 7' and 8' boards in fiberglass, and 9'6" epoxy.
6'1" boards: "Fast reactions and easy to paddle."
7' boards: "The epoxy was harder to duck dive, although I got used to it and was working well through the flat sections. But I'd probably lean more towards the polyester board."
8' boards: "The epoxy floated and paddled really easily, but was harder to duck dive. I'd go with the fibreglass board as the epoxy was just a little too thick around the rails."
9'6" boards: "Nose ride on the epoxy was very good, bit more responsive and a lot easier to get used to."

Favourite board: 9'6" epoxy.
6'1" boards: "A little faster (epoxy), maybe too much buoyancy for my weight but it was very fast."
8' boards: "The epoxy was lots of fun, paddles very well and manoeuvers very well, but in the fat sections can get bogged down."
9'6" boards: "Definitely go with the epoxy board as it keeps the speed up no matter where you are on the board."

No matter how good your new board is, if you don't know how to use it properly you'll never enjoy the experience to its fullest. Also, a sound knowledge of the ocean environment and how to recognise shifts in the surrounding weather patterns is crucial to ensure that you don't become another tragic statistic.

If you've ever wanted to be at one with the wave, now is a great time to learn to surf by joining one of the many surf schools available around Australia. The lessons learned will not only help you get up and away more effectively, you'll also gain a greater appreciation of the power of the sea, and how to recognise what to do in dangerous situations. Surfing Australia provides information on your nearest surfing school in each state, or you can visit your local surf lifesaving club for more information on local schools.

Although not considered on par with fibreglass boards when it comes to performance on the wave, a soft-top board can be great fun to learn on while still being able to satisfy surfers as they become more experienced. The soft-top was designed to fill the gap between sponge boards or 'coolites' (which offer safety but lack performance) and fibreglass boards (which offer performance with little safety and poor durability).

Unwritten laws (disregard at your peril)

Learning how to co-exist out in the surf can often be as important as learning to stand up on a surfboard, with several 'codes' to adhere to if you want to ensure a trouble-free day at the beach.

Also, if a person has 'My Brother's Keeper' tattooed across their chest, let them have the wave no matter what the circumstance!