We put ethical chocolate on the block to see how it compares for taste.

Chocoholic with a conscience?

We set out to compare. Despite its premium price, our test found most organic and free trade chocolate tastes pretty … ordinary. Of course, buyers of this chocolate have more on their mind than just taste. But if you are a chocolate connoisseur and you'd like to know your chocolate comes from a good place, never fear! We found a few that can hold their own against the better commercial chocolates.

Our amateur and expert chocolate lovers generally agreed on the pick of the dark chocolates. Alter Eco Dark Chocolate Velvet Touch of Organic Milk topped the staff panel test, with Green & Black's coming a close second. These two tied for the top spot with the experts.

However, Alter Eco caused a little controversy. Its high cocoa butter content and the presence of milk mean it can't be considered a true dark chocolate. Some of the hard-core dark chocolate lovers among the staff complained that it was "too soft and sweet for a dark chocolate" and "disappointing".

Loving Earth gets a dishonourable mention, with both the staff panel and experts placing it dead last. It was the only raw chocolate in the test, included because it looks and is packaged like a traditional chocolate block.  You may like it if eating raw food appeals to you, just don't expect it to be exactly like regular chocolate.

Our staff panel and experts didn't see eye-to-eye on the milk chocolate. Cadbury Dairy Milk topped the list for the staff panel, but came last for the experts.

With all plain Cadbury Dairy Milk blocks now carrying fair trade certification, it was interesting to see how it fared against the lesser known brands. Staff found it "sweet" and "pleasant" – "a good, traditional-tasting milk chocolate". It didn't score quite so well for some of the dark chocolate lovers in the group, who found it too sweet and tasteless – "lacking cocoa flavour". Our experts described it as "an average chocolate bar – not unpleasant, but not top-ranking" and "commercial and ordinary, with not many redeeming features".

The experts scored Aldi's Just Organic Milk at the top. Although they thought Cocolo had a more complex flavour profile with dairy notes, Just Organic was better overall, especially considering its bargain price.

Green & Black's also fared well among the staff panel, with Just Organic claiming third place and Cocolo rounding out the bottom of the list.

The darker side of chocolate 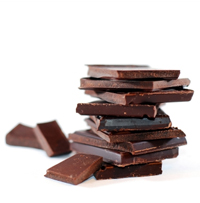 Cocoa production is fraught with both human rights and environmental controversy.

Cocoa farming is estimated to be responsible for the loss of millions of hectares of tropical rainforest. Unless sustainable farming practices are implemented, our current demand for cocoa means continuing deforestation.

Cocoa farmers use agricultural chemicals to limit losses from disease and pests. These can end up in the surrounding environment and can be dangerous for the farmers themselves.

Many small cocoa farmers in developing nations have no access to the market and are unaware how much their crop is worth. There is a long chain from bean to bar, so farmers only receive a small piece of the pie.

The sad reality is that your child's chocolate treat may be produced using child labour. In some countries it is accepted cultural practice for children to work on the farm as a transition into the family business. But some of these children are exposed to dangerous farming practices and are kept from attending school. Trafficking children to work on other farms is not uncommon.

The start of the fair trade movement is traced to the late 1940s, when religious groups and NGOs created supply chains in developing countries for the fair trade of handicrafts. Today there are a number of organisations that oversee fair trade throughout the world and set fair trade standards. Perhaps one of the best known is Fairtrade International (also known as Fairtrade).

Fairtrade Australia New Zealand says their system benefits farmers and producers in the developing world through:

Between 2009 and 2012, retail sales of Fairtrade-certified products in Australia and New Zealand grew by a whopping 302%.

To display the Fairtrade symbol you need to comply with certain standards, and you'll be independently audited for compliance.

But our analysis of endorsement schemes in 2010 found that Fairtrade certification falls short on one aspect – it is generally given to "producer organisations" rather than individual farmers.

These organisations can be made up of hundreds or sometimes thousands of farmers. For verification, a small number of farms chosen at random are checked, meaning some farms may never be visited. This is unavoidable as it is implausible for Fairtrade to inspect every single farm each year.

The system also favours small producers, so manufacturers are limited to a specific group of producers if they want to be Fairtrade-certified.

Organic cocoa beans are produced using farming practices that work in harmony with the local ecosystem to ensure sustainability. This means that farmers can continually produce crops without depleting their soil of nutrients – so no more forest-clearing. Organic farming also emphasises renewable resources and conserving energy and water.

Because synthetic chemicals aren't used, minimal residue is left in the finished product and workers are not exposed to high levels of synthetic pesticides or agricultural chemicals.

To be certified as organic a farmer needs to comply with the standards set out by whichever certification scheme they are using, and they will be subject to audits.

Imports certified under a foreign system must also meet our local standards and have documentation to support this.