How healthy are instant noodles?

Often high in sodium and saturated fat, we find the better brands of instant noodles and suggest ways to make them healthier. 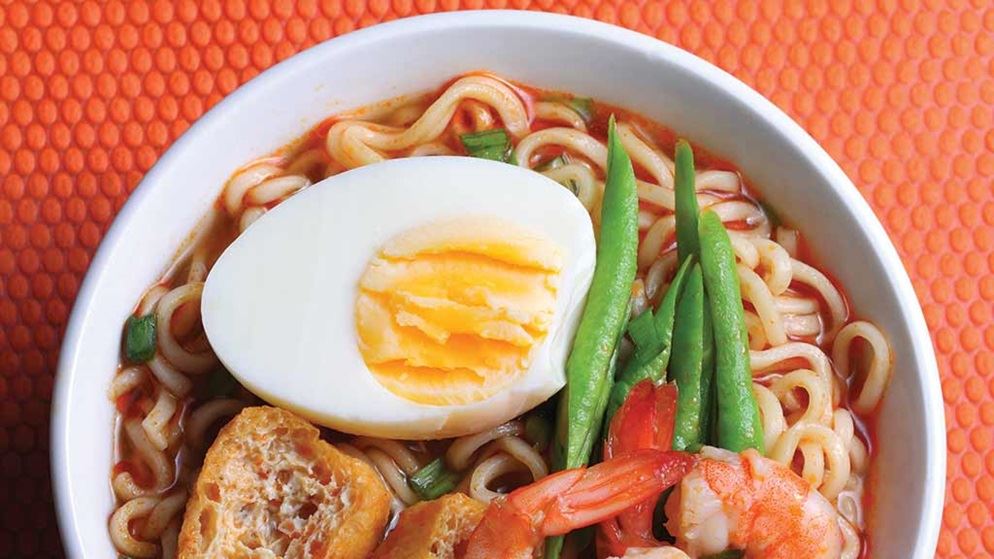 When the ravenous beasts get home from school, instant noodles are an instant hit. Whether in soupy stock, drained or, kids being kids, eaten raw straight from the packet, they're a salty, fatty taste sensation, for children of all ages.

Trouble is, they're not always the healthiest of foods – even potato chips rate better! But it's possible, with a little info on the problem areas, to make better choices.

When prepared and served as directed, instant noodles contain up to a quarter of the average adult daily kilojoule consumption of 8700kJ – so maybe more of a meal than a snack. Serving size is just part of the difference between varieties; the amount of fat is another, with fat content ranging from less than 1% to 25%.

The 'instant' in instant noodles comes thanks to their cooking prior to packaging. The raw noodles are steamed and then deep fried in oil to remove the moisture and improve shelf life. This frying makes instant noodles higher in fat than fresh or air/oven dried noodles (low fat instant noodles are air- or oven-dried after cooking).

Unfortunately, the most commonly used oil is palm oil which is high in saturated fat. It's cheap, can withstand high heat and has a longer shelf life than other oils. Additional fats can sometimes be found in the very tasty seasonings. Malaysian brand Mamee uses corn oil in its chicken noodle snacks and is phasing out the use of palm oil in other products.

The World Health Organization recommends a maximum of 2000mg of sodium per day (equivalent to 5g of salt) for adults. The Australian Dietary Guidelines recommend a maximum of 2300mg for adults and children 14 and older. Acceptable maximum sodium intake for kids is lower, ranging from 1000mg for kids under three, 1400mg for ages four to eight and 2000mg for ages nine to 13.

Most of the sodium is in the sachets, rather than the noodles, so the simplest way to reduce the salt is to drain the noodles, use only part of the flavour sachet or dispense with it altogether. See 'Noodle hacks', below, for more tips on making noodles healthier.

Carbohydrates are a valuable source of energy, but some forms are better than others. Instant noodles are made mostly from white wheat flour, with other starches including tapioca and potato sometimes added. They're low in fibre and don't keep you feeling full for long. Maggi's 'invisible wholegrain' noodles contain 6g of wholegrain, contributing to the daily recommendation of 48g of wholegrains per day for adults and children nine years and older.

The following products rated 3.5 stars, and tend to be lower in sodium and saturated fat than other products: 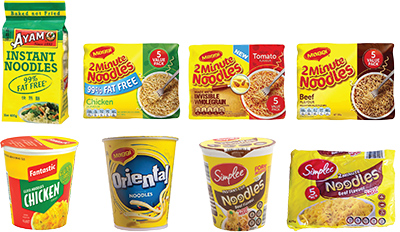 *Health Star Ratings are based on the kilojoules, saturated fat, sugars, sodium, protein and fibre in 100 grams or mL of the product, as well its fruit, vegetable, nut or legume content. See www.foodswitchstars.com.au for more on the scheme and to look up your favourite foods. 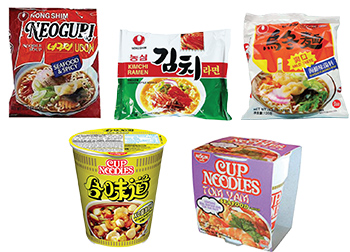 Nong Shim noodles from Korea and Nissin from Hong Kong are typically high in sodium, and many varieties rate only half a star – the lowest possible rating.

Noodles manufactured for the Australian market often have a daily intake panel showing how much one serving of the noodles will contribute to the maximum daily intakes for energy, fat, saturated fat, sugars and sodium.

If you plan to eat them with all the inclusions, look for ones lower in saturated fat and sodium. Keep in mind these percentages are based on an adult diet – kids tolerate less salt, so refer to the nutrition information panel and compare the sodium per serve with the recommended levels.

You could also consider some noodley alternatives. CHANG'S Long Life Noodles rate 4 stars, and ingredients are flour, salt and water. No added fat, no additives. They take three minutes to cook – an extra minute worth waiting in our opinion.

Another alternative is shelf stable 'fresh' noodles. These noodles are already cooked and ready to eat, and need only be run under boiling water (or even hot tap water for kids) to be warmed up and teased apart. KAN TONG Singapore Shelf Fresh Noodles are thin wheat-based noodles with 4 stars, and no added fat.

What do the experts say?

We had five parents try out some of the chicken-flavoured MAGGI noodles on their kids, ranging from five to 17 years old. They all liked the standard 2 minute noodles, most liked the cup noodles, and the 'invisible wholegrain' were a hit – most kids liked the slightly firmer texture and they weren't too salty. The 99% fat free were the least favourite in both taste and texture.

Given the wholegrain noodles offer the added benefit of wholegrain and are also low in fat, they're definitely worth a try but you may want to tinker with the cooking time to get the texture you prefer.