How much food is in your canned food?

We measure the drained weight of supermarket canned foods to see how it compares to what's on the label. Are we being conned by cans?

Readers have shared plenty of stories about the lashings of liquid and scant solids in their canned food, wondering if they were being ripped off. So we decided to get to the bottom of this (ahem) can-undrum.

We took five popular canned food categories – tuna, corn, peaches, chick peas and beetroot – and drained the liquid and weighed the solid contents to compare our findings with what's on the label.

Our digital kitchen scales reviews, with scores for models from Arlec, Convair, DeLonghi and more, will tell you which are the most accurate and the easiest to use.

Are the canned food labels accurate?

We spot-checked 27 different leading brand and supermarket own-brand canned food products – two samples of each. Only four of the 54 cans we opened contained exactly the amount of food that's labelled – but that's not the bad story it may seem.

How the brands performed

How did the brands compare for delivering the weight promised? There wasn't much in it, but in our spot check:

How the food types compared

And out of the four types of food we tested:

It appears that cans have a tendency to contain more food rather than less than what's labelled.

Why then do people feel they're being ripped off?

Part of the problem could be that the weight that's labelled on the front of the can isn't telling the whole story. The label states the net weight, which is the weight of the contents (both solids and liquid) minus the packaging. So for foods packaged with liquid, the weight of the food alone isn't going to be the same as – and may not even be close to – the weight on the label. 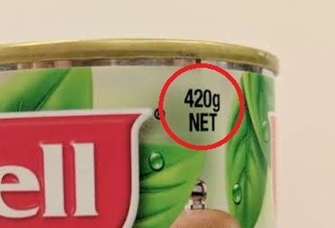 If you're likely to consume both the food and the liquid – canned tomatoes or sliced peaches, for example  – then this isn't really an issue. But there are many types of canned food where you'll likely drain off and discard the liquid – think tuna in spring water, corn kernels or chickpeas –  and there's currently no requirement in Australia for manufacturers to label the drained weight of food in cans.

To find out how much food you'll be getting before you open the can, you need to:

The liquid, or 'packing medium', in a can (water, oil, vinegar or juice for example) is there for protecting and/or flavouring the food. And the amount of liquid, and therefore food, varies.

Across all the different cans we tested we found the percentage of food inside ranged from 56% (several cans of chickpeas) up to 79% (a can of tuna), with a total of 65% food on average.

When one third of what you're paying for is liquid – often a liquid you'll be discarding before eating – it's not surprising some people feel they're not getting their money's worth. 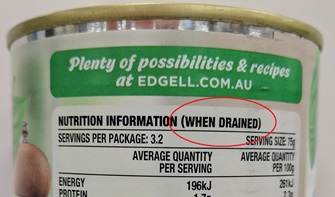 For foods that are intended to be drained before consumption, the food standards code requires the quantities in the nutrition information panel to reflect the food 'as drained'. This makes sense, as you're only going to be interested in what you'll actually eat, not what you'll be pouring down the sink. But you could argue the same for the weight labelled on the front.

While you can calculate the drained weight yourself, CHOICE thinks that if nutrition information is based on it, then the drained weight should be given on the label too. That way, consumers can see at a glance what they'll actually be getting in the way of both nutrition and food content. This is particularly important considering there are implications when comparing prices.

See how models from Magimix, Tefal and KitchenAid compare against the ever-popular Thermomix in our all-in-one kitchen machine reviews.

Comparing the unit price between two brands, or sizes, of the same product is how you can work out which is the best value. The unit price is the price per 100g or 100mL of the food you're buying.

But unit price is based on the net weight of the contents minus the packaging, which in the case of food in a liquid includes the liquid content as well.

Some canned tuna contains more liquid than others.

The labelled tuna content of the cans in our spot check (all with a net weight of 95g) ranged from 65% to 74%. Ranked from least to most expensive, we get a different order depending on whether the unit price is based on net weight or drained weight.

So if you're trying to find the best deal and you're choosing food that's intended to be drained, check that the percentage food is the same in the products you're comparing. 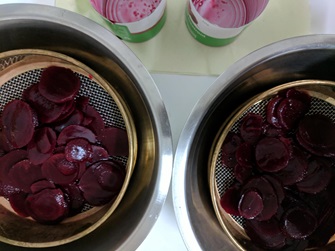