Do you really need a sports drink to hydrate when exercising? 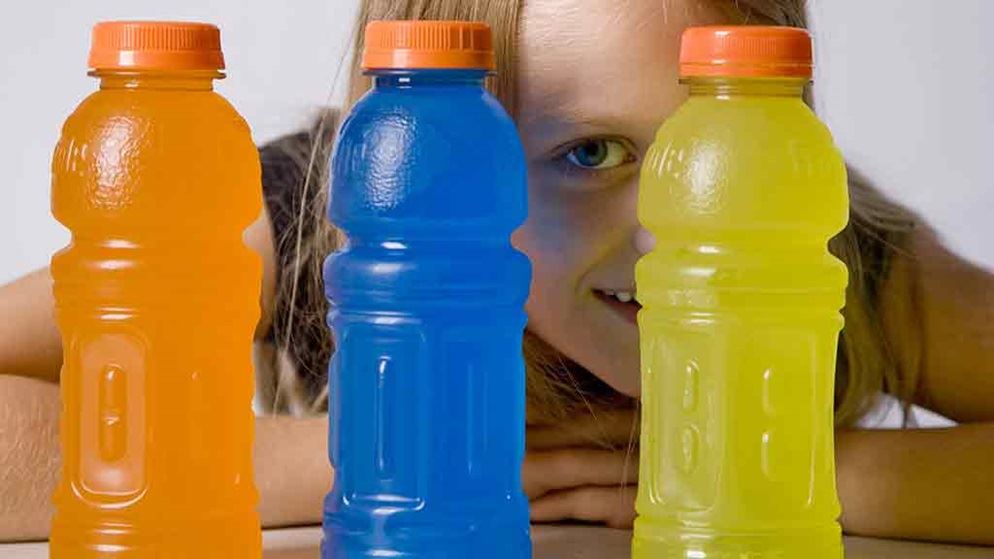 The science and sale of hydration

Tough jog around the block? You'd better knock back a sugar-packed, electrolyte-packed, blue-flavoured drink to avoid getting dehydrated – or so some advertisements would have you believe.

With more sophisticated market segmentation and targeted marketing, sales of sports drinks have reached over 50 million litres per year with a market value of $150m. And their popularity continues to grow.

Meanwhile the simple action of drinking water when thirsty has been unnecessarily complicated by science and pseudoscience, to the point where people no longer trust their bodies to tell them when to drink.

Sports drinks: what's in them?

Strenuous exercise in hot conditions can lead to water loss of up to two litres per hour through sweat. If you sweat more than two per cent of your body weight your heart is placed under stress, your body temperature goes up, and your physical and mental performance declines, so it's important to replace lost water during exercise.

Food Standards Australia New Zealand (FSANZ) has a standard for "electrolyte drinks" which states that per litre, they must contain at least 230mg of sodium and 50–100g of sugars (no more than 50g of fructose).

The sugar and salt in sports drinks are at the right concentrations to maximise the speed with which water moves from your gut into your bloodstream. But plain water is absorbed almost as quickly and is perfectly adequate for moderate exercise or if you're exercising for less than about an hour.

But the sense of thirst is slow to react to dehydration, so if you’re exercising hard in hot conditions it’s a good idea to drink before you become thirsty. In fact you need to drink before, during and after exercise.

The sugars in sports drinks can also help replenish the fuel you use during exercise. The body stores fuel as carbohydrates in the muscles and the liver and releases sugar into the bloodstream for instant energy. But after prolonged exercise – about an hour of intense exercise, like a fast run or hard cycling – the carbohydrate stores are depleted and blood-sugar levels can drop. A steady source of sugar during strenuous exercise for an extended period can help fight off fatigue and enhance performance. With lower intensity exercise, such as jogging, it may take two hours or more before energy needs replacing.

The salts in sports drinks help replenish the body's electrolytes lost in sweat. Sodium helps regulate the body's fluid balance and plays a role in muscle contraction, and potassium is also involved in muscle contraction. But for the average exerciser this is less important than the ads would have you believe: most of us already get too much salt in our regular diet so your usual food intake should be more than enough to replace any electrolyte losses. A 600mL bottle of some sports drinks gives you more than 10% of the maximum recommended daily intake of sodium.

However, for endurance athletes, sodium losses are a more serious issue: low sodium levels often coupled with excessive water consumption have caused more than a few deaths among athletes, hikers, military personnel and people undertaking strenuous activities over long periods of time in hot conditions – see Too much water?

Verdict: do you need a sports drink when exercising?

The bottom line is that for most people sports drinks are an unnecessary expense and provide unnecessary salt and kilojoules. If you're simply an active person who plays social tennis, swims or goes to the gym a couple of times a week, you don't need sports drinks. However, for long periods (an hour or more) of strenuous exercise they may be beneficial.

Sports drinks are sometimes promoted as better than water for young kids because the kids tend to drink more than if they were only offered water, preventing dehydration. But sports drinks are acidic and can erode dental enamel. And the salt in sports drinks is even more undesirable for children than it is for adults because their maximum recommended intake is less (depending on age).

Experts argue that sports drinks are unnecessary for children and adolescents, and their consumption is part of the growing childhood obesity problem. If kids are thirsty, they'll drink water if water is provided.

If you regularly engage in strenuous activity of an hour or more and feel you could benefit from a 'sports drink', you don't need to fork out for a commercial one. Here's a recipe from the US Olympic Committee website:

Dissolve the sugar and salt in hot water, then add juices and cold water.

A simpler recipe is to combine 500mL of unsweetened fruit juice, 500mL of water and a quarter of a teaspoon of salt. Experiment a little with the proportions – less juice, more water and half the salt will make it hypotonic (less concentrated).

Some sports drinks claim to be isotonic, which means they have the same concentration of solutes (substances dissolved in water or another solution) as the blood and cells, which helps with their absorption. The Standard for electrolyte drinks specifies criteria for the osmolality (concentration of solutes, being salt and sugar in this case) of drinks that claim to be isotonic.

Drinks like fruit juice or soft drink are hypertonic, meaning they have a higher concentration of solutes than the blood and cell fluids. They are released from the stomach more slowly than weaker drinks, so don't rehydrate as quickly, and also draw water from body tissues into the gut, potentially increasing dehydration.

Then there's hypotonic drinks, which have lesser concentrations of solutes than the blood and cell fluids. An example is Mizone Formulated Sports Water, which promises rapid hydration and is marketed for sports. While it meets the Standard for electrolyte drinks (or 'sports drinks') in terms of sodium, it has less sugar (3.7%) than other sports drinks (5-10%), which should be taken into account if energy is an important consideration – as for endurance events.

There is some clinical evidence that hypotonic drinks are absorbed faster than water, isotonic or hypertonic drinks, and that drinking them may feel more "refreshing". You can achieve a similar effect by adding one part juice to three or four parts water.

For most people, constantly topping up with water regardless of thirst may be harmless, but for some endurance athletes it has proven deadly. A condition called hyponatraemia, meaning low sodium, has caused the deaths of marathon runners and other endurance athletes, hikers and military personnel during training.

Hyponatraemia occurs when sodium levels in the fluid between cells are reduced relative to water, causing water to move from there into tissue cells, making them swell. Hypnotraemic encephalopathy refers specifically to brain swelling, and results in dizziness, nausea, confusion and muscle disorders, and can lead to unconsciousness, coma or death.

It's increasingly occurring in exercise situations due to over-hydration. Indeed, experts in the field have noted that while there are no documented cases of anyone dying of dehydration during endurance sport events, people have died of hyponatraemia caused by over-hydration. And it's not just sport: the Medical Journal of Australia reported that several hikers walking the Kokoda track have suffered from exercise-associated hyponatraemia, while a hiker's death in Tasmania in 2011 was also attributed to hyponatraemia.

Researchers investigating this relatively recent trend have observed that so entrenched is the mantra to "stay ahead of your thirst", long-distance runners and other athletes tend to drink at drink stations regardless of how thirsty they feel. Consequently, athletes are finishing events heavier than they started due to drinking more fluids than they lose through sweat and other processes.

An Australian study on adolescent elite athletes at a one-day sports camp found that they drank more than enough, and were mildly hyponatraemic.

Some people seem to be more at risk of hyponatraemia than others. Risk factors include length of time exercising (longer race times create greater risk) and amount of liquid consumed. Some studies have found women are more at risk, though others put this down to smaller body size and slower race times (therefore larger consumption of fluid) rather than gender. Increased risk may also have a genetic basis.

If drinking too much water can cause hyponatraemia, does drinking sports drinks solve the problem? Sports drinks contain sugar and salts, with the sugars providing an energy source and assisting absorption of water, and the salts replacing those lost through sweat. In addition, the salts and sugar make you a little thirsty and encourage you to drink more, therefore providing adequate – though some would argue excessive – hydration.

When it comes to hyponatraemia, however, the concentration of salts in sports drinks is lower than the saline concentration in blood. When you sweat, you lose about 900–1400mg of salt per litre, and while some drinks contain almost this much sodium (for example, Gatorade Endurance Formula contains around 840mg of sodium per litre), most sports drinks typically contain 230–510mg/L. This means the levels of salts in the drinks don't quite replace the amount of salt lost through sweat, and it's the dilution of sodium in the body that causes hyponatraemia.

So although sports drinks don't necessarily prevent hyponatraemia – and people drinking sports drinks have suffered hyponatraemia – it makes when heavy salt losses through sweat are likely, such as during endurance sports and long hikes in hot weather, to drink sports drinks instead of plain water, because you're replacing at least some of the salts.

The advice for marathon and other long distance runners from the International Marathon Medical Directors Association (IMMDA) is to "drink to thirst". Don't drink if you're not thirsty, don't feel compelled to drink at every station and be mindful it's normal to lose a little weight during a race.

Although this advice may not sound very scientific, in fact it's based on the latest scientific evidence. If you need better guidance than this, the IMMDA recommends you work out your sweat rate – how much sweat you lose over a given time and different conditions – by weighing yourself before and after a training run. Some say adults should expect to lose one to two per cent of body weight in sweat, and most agree that more than two per cent affects physical and mental performance.